BBC's Who Do You Think You Are? - Monty Don

The Library is sometimes called on to help out with popular television programmes with a Guernsey connection. 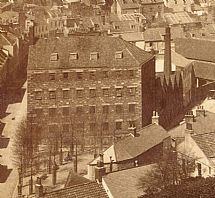 Having previously played a major role in an episode of the BBC's Who Do You Think You Are? television show when it hosted a visit from the actress Sheila Hancock, who was investigating her Guernsey connections, the Library was able to provide images to complement the genealogical researches of the television presenter and gardening expert, Monty Don. The photograph shows the old Marmalade Factory in St Peter Port, with which Monty had a connection.

Original photographs from the 1870s were located in our image collection and provided to the producers. Since then copies of these photographs have been in great demand from the public, too. Copies of our images can be obtained by contacting a Librarian.