French delegation visit the Library, May 2013 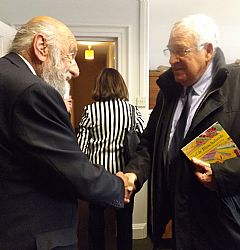 The link with this part of France and Guernsey is historically very strong, with a fundamental part of the original social and cultural institutions of the island being based in this region, and we hope to build on this already firm foundation and expand and strengthen our linguistic and genealogical links in the years to come. 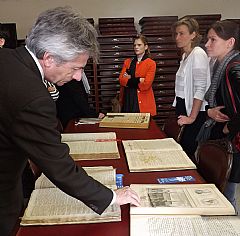 On show were our newspaper collection—seeing the Battle of Waterloo reported in French, but from the British side, was quite a novelty—the grand and petit coutumiers, which contain the laws we used to share with our Norman cousins, the Guernsey French collection, maps and charts, including the Legge Report, and the log of L'Invention, a very successful Guernsey privateer which had been captured from the French in the first instance (although they captured a few from us in their turn, we have to admit), amongst other unique items. 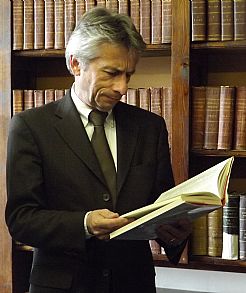 In the accompanying photographs are shown, with our Chief Librarian Amanda Bennett, Laurent Beauvais, President of the Regional Council of Basse-Normandie, and Jean-François Le Grand, President of the General Council of the Manche, together with members of their staff, and members of the Priaulx Library Council, Jurat Claire Le Pelley and Bill Robilliard, the latter's anecdotes in Guernsey French proving most interesting to the visitors. 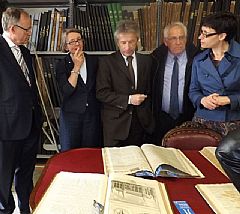