Guernsey Heroes of the Royal Society, 2010

The island was honoured in November 2009 by being the site of the first anniversary lecture under the Society's auspices.The lecturewas One shilling weekly: 350 years of the Royal Society, and was given by Keith Moore, Chief Librarian and Archivist, Royal Society, at the Frossard Centre in Candie Gardens, who informed the slightly bemused local audience that a former Guernsey Fellow had submitted a recipe for cooking cormorant to the Society. They were relieved to discover that this was not a recent event. 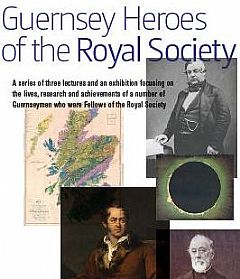 A comprehensive display of biographical information, works, and objects associated with members or would-be members of the Royal Society with links to Guernsey was on show at the Library, complementing a series of lectures which took place in the Island to celebrate the Society's 350th anniversary. From 1st April to 25th June the Library hosted this free exhibition, featuring the lives and works of ten Guernsey Fellows of the Society, and information about other Fellows who have some connection with the island.

The earliest Fellow featured is the Stuart courtier Sir Henry de Vic,an 'Original Fellow,' having been elected in 1662 prior to the granting of the Royal Charter to the Society. Case displays are dedicated to the 19th-century astronomer Warren de la Rue and to S. Elliott Hoskins, some of whose geological specimens are included in the exhibition.

The remaining lectures were: