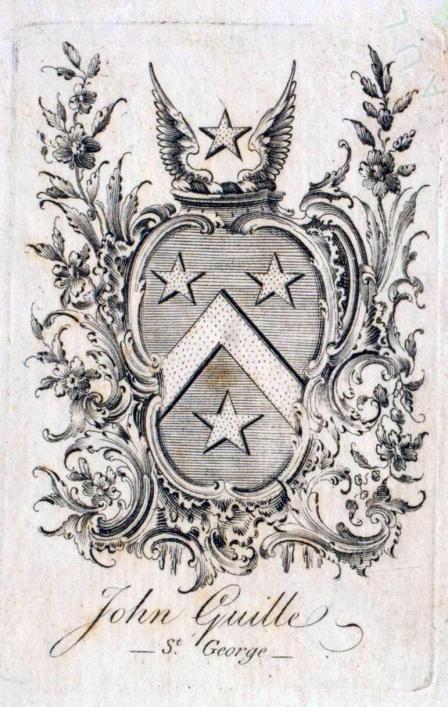 The Library is delighted with the number and generosity of the donations received thus far in 2015. The book-plate of John Guille is from Falle's Caesarea, 1797, donated to us by Hazel Greany.

The late Brian Torode, who was born in Guernsey and educated at Elizabeth College, left to the Library his substantial collection of local history books and postcards.

An avid local historian, Brian settled in Cheltenham and wrote a number of books on Gloucestershire and other subjects. His career changed from Primary School Head Teacher to Anglican Priest, and he was a close friend of Guernsey's Canon Lecluze. He took a great interest in his own Guernsey family history, and in the history of the Catholic Church in the island. A website has been created in his memory.

The Library is very grateful to Brian Torode and to his executors. The local history books we have in our collection are very difficult to come by, and a substantial collection as this was is most generous and most welcome.

Of Occupation interest: Sylvia Cox, of Wantage, generously donated to us 11 Red Cross Letters of the Marett family of the Grand Bouet, St Peter Port.

Nicola Challis presented to us Captain Thomas Mitchell's Account Book from Onesimus Dorey's cargo vessel, the Belgrave. This complements our existing collection of Dorey papers and is much appreciated.

Peter Durrant of Earley, Reading, on behalf of the late Sabina Sutherland, donated to us St Martin's parish magazines for 1894 and 1896, bound with the Church Monthly.

An eclectic set of documents has come to us from Peter Henry. He kindly gave us Trevor Blakemore's Poems and ballads (1965); La Fête d'la vielle langue normande, le 24 juin 2006 à la salle de l'église de Torteval, and a very evocative Guernsey item, the Guernsey Tomato Marketing Board's Bulletin No 23 for 26 September 1958. This sort of ephemera can prove immensely useful to researchers: if you are considering disposing of these types of items, do think of us!

An anonymous donor made us a very generous gift of a boxed copy of the Festung, no. 111 of 135.

The historian Gillian Lenfestey has made several donations of books and other materials from the estate of her late husband, Hugh Lenfestey, including 'War Office regulations' re Army Services 1848, Les portulans, a French book describing maritime portable maps from the 13th-17th centuries, and a substantial collection of local books.

Mr R Le Bargy presented us with a new edition of his Le Bargy family history 1800-2000.

Jeff Martel made a donation of a number of local books.

Hazel Greany made a very denerous donation of local material, including a copy of MacCulloch's Guernsey Folk Lore, Ferdinand Brock Tupper's History of Guernsey, the very useful CEB Brett's Buildings ... in St Peter Port, a 1967 first edition of Marie de Garis' Dictionary, Lemprière's Buildings & memorials of the Channel Islands, Victor Coysh's Call of the island, Collected works of Marjorie Ozanne, Joan Ozanne's Stitch by stitch: the Millennium Tapestry, Sir John Loveridge's The Constitution and Law of Guernsey, 1975, N Favela-Stevens, ed., St Peter Port in the golden age of the postcard, Brief History of St Saviour's Church with retirement letter from James Bower, Rector, December 1964; William Vaudin's politically incorrect pamphlet parodying the notion of letting women into political and judicial life in Guernsey, A peep in the future; The New Parish Church of St Ann, 1850, by Louisa Lane Clarke, with a dedication from the author to the Reverend George Guille; an 1818 pamphlet, relating to the Dismissal of Colonel Guille by Major General Bayly; and two books from the collection of John Guille of St George, the Approbation des Lois, 1822, and Falle's Caesarea, 1797.

Bryan Mauger donated several books on the life and career of Winston Churchill.

Philip Stevens donated an interesting comic book, Grisnoir II, from the Julien Boisvert series by Dieter and Plessix. This is a 1991 French publication, set in Guernsey and Sark.

Various WWII items were given to us by Iain Timms: a photograph of the Royal Guernsey Militia in 1939; a petrol ration book; an RAOB medal, Mr P M Le Page; and a copy of the Weekly Press, May 15 1945.

J L Vaudin presented us with some interesting correspondence between the US airman, Alec Ingram, and D F Vaudin concerning sorties flown over Guernsey, including that of June 7 1944, and a typescript translation of leaflets dropped by the RAF to the Occupying Forces on June 20 1944 (et al.).

The Library received a contemporary chart of grave plots in the Green Lane cemetery, from Alan and Eve Weston on behalf of Bernard Lainé. This document is very unusual, and has the potential to be extremely useful, if anyone else can provide the missing key! Please ask at the Library if you would like to see this item.

Steven Foote gave the Library a copy of the recently published Genius Friend: G B Edwards & the Book of Ebenezer Le Page, by Edward Chaney. Rose-Marie Crossan donated copies of her new work, Poverty and Welfare in Guernsey, 1560-2015: Woodbridge, Boydell Press, 2015, and Colonel Richard Graham gave us a copy of his new book, At Their Majesty's service, Sark: Gateway Publishing, 2015, the history of the Governorship of Guernsey and Guernsey's allegiance to the Crown.

Anthony Ozanne of Guernsey donated to us copy-books of correspondence kept by his grandfather, J H Carré, regarding the rearing and sale of bantam hens, in two volumes, covering March 1927 to June 1928, and June 1928 to April 1930.

Mrs B A Buckley donated photographs and other family material, including the birth certificate of Mr H W S Whitford.

Mrs E Calvert of Boston Spa donated to us an Ordnance Survey map of Sark, along with two printed and three hand-drawn maps of the tenements.

Colonel Richard Graham donated a set of picture postcards dating from (perhaps just post) WWI; nine postcards bound together, from the battlefield of Zillebeke, including abandoned tanks and trenches.

Mrs C Harris gave us a collection of local books and leaflets from the estate of her late mother, Mrs Sarre, and Patricia Held gave us two photographs with inscriptions almost certainly by Charles Toms, to be added to the Carel Toms collection.

THOMAS BLONDEL COLLECTION. Ann Marshman donated a fascinating set of material relating to Thomas Vernon Blondel (Army No 863936), a career soldier who died as a POW of the Japanese when the troop ship his captors were transporting him on was torpedoed. This includes four medals, War Office letters, and a photograph album of Singapore in 1938.

SELL COLLECTION. David Sell of Albury, NSW, very kindly sent us by post all the way from Australia an extensive collection of material belonging to his mother, Hilary Sell, who as an avid family researcher had amassed a great deal of information and had already lodged a family tree with us. The Sell collection of photographs and papers has not yet been catalogued but refers mainly to the Le Lièvre family. Names include Audrey Le Lièvre, Peter Le Lièvre and Cecil Waterford. [Le Lievre]