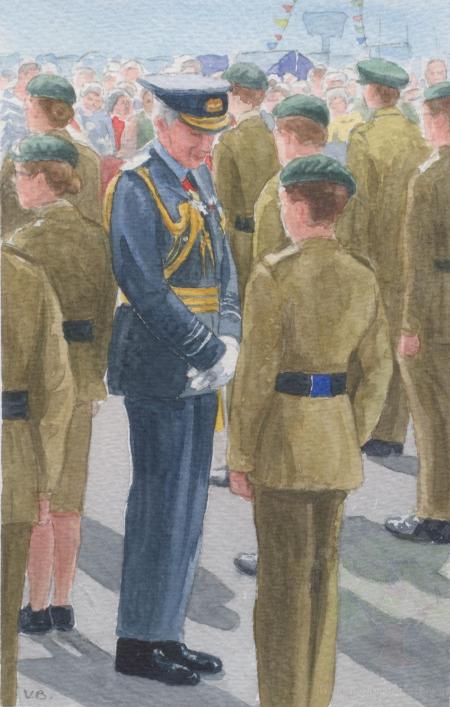 The Library has received some lovely sketches of local scenes from the well known watercolourist, Valerie Baines. They are a vivid and lively depiction of Liberation Day on Guernsey in 2011, including a few more unusual scenes. The sketch featured shows the late Lieutenant-Governor, Air-Marshal Peter Walker, inspecting local cadets.

Valerie Baines has a distinguished career as an artist, and the Library is very grateful to have received these exquisite watercolours to add to its collection.  As founder member and past Vice-President of the Society of Botanical Artists, Valerie has produced wonderful pictures of botanical subjects, and is a Fellow of the Linnaean Society. Multi-talented, not only did she train at Harrow Art School, but also attended the Royal College of Music. Her work may be familar in a more domestic sphere, as she worked as a designer for Sanderson. She has been a frequent exhibitor at the Royal Academy and has illustrated many books; she has her own website.

Valerie and her family have a particular love for Guernsey, and she has visited the island and painted it many times. The Library has a copy of her recent publication, the Guernsey Sketchbook. Please ask a Librarian if you would like to see this or Valerie's lovely originals.