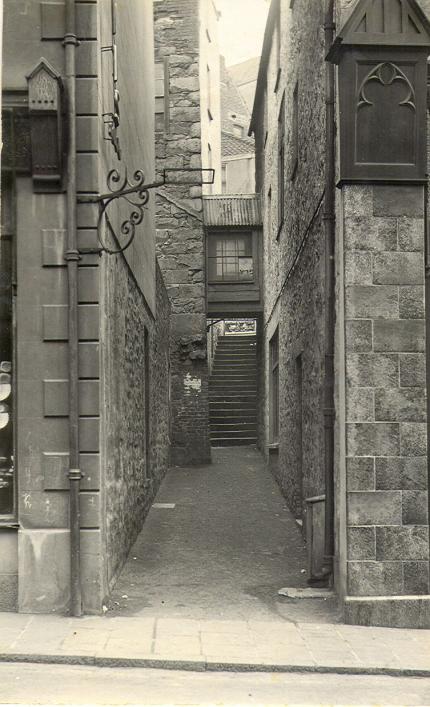 Mr Havilland's house is consumed by fire: two accounts, one from Jean de la Marche's diary, the other from George Fashion's notebook. The photograph is of the Ruette Marie Gibaut (colloquially Fuzzey's Lane), in St Peter Port, in 1936, from the Library Collection.

This Monday night about midnight there sended a fire through the negligence of a mayd at Havyelande’s house, that so sodenly burnt the house and all that was in it that they had not meanes to get out, three pretty mayden children and a mayd servant,1 until they were either suffocated by the smoke or burnt to death.

On the evening of the 22nd of August, a terrible fire took hold at Isaac Gibault's house and three of his children and a maidservant were burnt to death. My sister, who lived opposite the house, was paralysed with the shock. This Gibault kept having a go at me because I had been removed from the Town Church; he used to chide me and throw back at me a passage of Proverbs—12.5.27—that I had expounded during one of my sermons there; he had been really scandalised by my interpretation and kept saying 'Look how you have well and truly cooked your catch.3'

1 The Town Church registers tell us that the children were Bertranne, Jeanne, and Rachel, daughters of Isaac Gibault and Jeanne Fautrart. Their aunt seems also to have died in that month, 'the sister of the above Isaac Gibault;' the records point to his having only one sister, Rachel, born in 1581, their parents being Pierre Gibault and Collette du Vay. The maid is not present in the burial records, unless she was from another parish and buried there, or, the accounts of Fashion and de la Marche are referring to Rachel Gibault. Bertranne was named after her father's sister, Bertranne, who married Michel de Saumarez; she in turn was named for her own mother, Bertranne Estur, wife of the jurat, Jean Fautrart. Rachel was probably named after her aunt, Rachel Gibault. As well as Isaac's sons, one sister survived; Colette Gibault, who married first the ardent Royalist Thomas Bouillon, 'the most perfidious and obstinate enemy Parliament may ever have had since the troubles' (Actes des États I, p. 386), and then Jean Le Geyt in 1652. The Gibaults were ancestors of the former Bailiff, Sir Stafford Carey, who has left some research on them; see the Gibault family file in the Library.

The diary of Jean de la Marche, Guernsey-born Puritan divine, is transcribed by Rolleston and De Guérin in the Transactions of the Société Guernesiaise, 1931 XI (2), 'Jean De La Marche, 1585-1631. The Diary.' The previous year he records in the journal his appearance before the Bailiff, prior to his appeal to the king concerning his imprisonment in Castle Cornet; a 'Gibaut' is sitting in judgment on him there. De la Marche had just returned from petitioning the King at the end of July; he had only a few days before been deprived of the incumbency of the Town Church, about which Isaac Gibault had reproached him. Despite Jean de la Marche's and Isaac Gibault's evident antagonism (de la Marche was very outspoken), these families are very closely related in their interest in the religious life of the island, in which they played a major part, and by marriage; for example, Isaac's brother Pierre was married to Elizabeth de la Marche, and a Jean Gibault was married at the same time to Marie de la Marche. The Fautrart family and the Gibaults both originate in Jersey, and the church records show them in mutually supportive relationships with other Jersey families at baptisms.

The entry from George Fashion's notebook is recorded by Spencer Carey Curtis in his MSS copy (Staff 41) of Jean de la Marche's Diary in the Library; the house may well have belonged to the de Havilland family (perhaps to James de Havilland, the prominent Parliamentarian) and been rented by Isaac Gibault. In the 1660s we find Isaac Gibault selling a house in the Rue Tanquerel (near the Town Church, where the Arcade now is) to Thomas Fiott. For Isaac Gibault son of John, trustees of the succession of Thomas Guille for Mary his daughter, Judgment of 12 January 1658 (widow Martha Lommeau, 1630.)