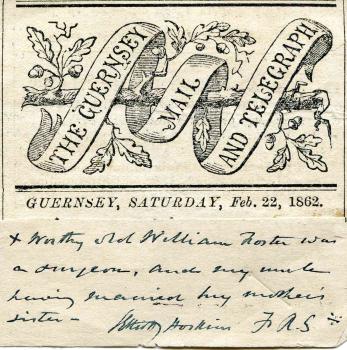 The Guernsey Mail and Telegraph, February 22, 1862.  'To the Editor of the Mail and Telegraph.  As the following lines were the result of an hour’s innocently playful reminiscence, the Editor of the Mail and Telegraph might not be so terribly serious as to reject them.  Small localities like this for every reflective mortal who has lived much through the seven ages of life, unavoidably furnish temptations to personal allusion.  It is not the less true that, whether they be an FRS, a Sieur Pierre Robin, or an industrious and modest Charles Ozanne, not one of three acquaintances that LÔ DEBHAR* has presumed to notice here has ever inspired any other feelings than those of unfeigned respect and regard.'  This is from a cutting in the Priaulx Library collection. The note above was made at the bottom of the cutting by Samuel Eliott Hoskins, FRS. 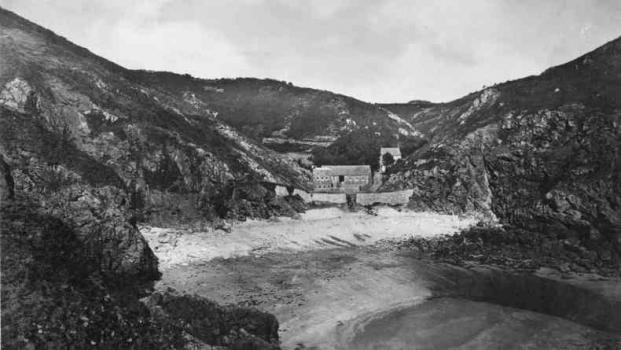 By Herbert Bird Tourtel, from The Coming of Ragnarök, Guernsey, F B Guerin, 1895.

Jean Hugo was the great-grandson of Victor Hugo. A talented artist and theatre designer, he was a schoolboy at Elizabeth College in Guernsey and made later visits to the island, of which he was very fond, including attending the inauguration of Jean Boucher's celebrated statue of the poet in 1914. The Library has a signed copy of his autobiography, Le Regard de la mémoire, which he gave to Roger Martin, the curator of Hauteville House at the time of his visit in 1977; Roger Martin's ancestor was, coincidentally, one of Victor Hugo's 'poor children.' The photograph is courtesy of the Guernsey Press.By Dinah Bott.

The poet Algernon Charles Swinburne visited Guernsey and Sark in order to follow in the footsteps of his hero and fellow poet, Victor Hugo. He fell in love with Sark and wrote poems describing his time there, so much so that he declared he would like to be king of the island. The portrait of a young Swinburne is by Rossetti — Swinburne had a mane of flaming red hair. It was drawn in August 1860 (image from the Rossetti Archive from a print held in the Delaware Art Museum). There is a selection of his Guernsey poems with reference to Victor Hugo at the bottom of this page. [By Dinah Bott]

‘Tu ne tueras pas.’ Pas d’exception. ‘Thou shalt not kill.’ No exceptions. [Victor Hugo, 19 Feb. 1854, Marine Terrace, Jersey]. This death mask was kept by Victor Hugo in the Billiard Room in Hauteville House along with his famous drawing of Tapner, 'Le Pendu,' or 'The Hanged Man.' The Billiard Room was also home to portraits of the Hugo family, other favourite drawings, and maps of meaningful places in Hugo's life. The importance of these memoirs of Tapner to Hugo is thus obvious: they were a permanent reminder of the cruelty of man to man, and of his (for him) abject failure to save Tapner from the scaffold. In addition Hugo blamed himself for Tapner's execution, believing that his ardent intervention had actually been counter-productive - that the French government had pressed upon their British allies not to give in to Hugo's wishes, and that the British had complied. This striking photograph of the mask is by the late Guernsey photographer Carel Toms, taken in 1975, and is part of the Guernsey Photographic Archive held at the Priaulx Library.

12th April 2017
A lucky ticket, From the Gazette de Guernesey, 6 April 1822. A parody of a piece of puff for the Guernsey Lottery, the poem may be the work of Dr James Tupper  - 'Monsieur Toupar' - who is known to have written light-hearted poems in Guernsey French.

In Guernsey in 1858 Victor Hugo became seriously ill with anthrax. It was apparently after recovering from this near-fatal illness that he was persuaded to grow a beard, as a protection for his throat; the first photograph of him sporting a beard was taken on 5 May 1861 on a visit to Brussels, during his trip to finish Les Misérables. For a while he allowed it to grow luxuriantly, but soon smartened it up and adopted the shorter beard now so familiar from photographs. Above is a portrait of one of Hugo's hairdressers, James Le Gallez, by kind permission of Ann Philippo. This is part of the Victor Hugo and Guernsey project. [By Dinah Bott]