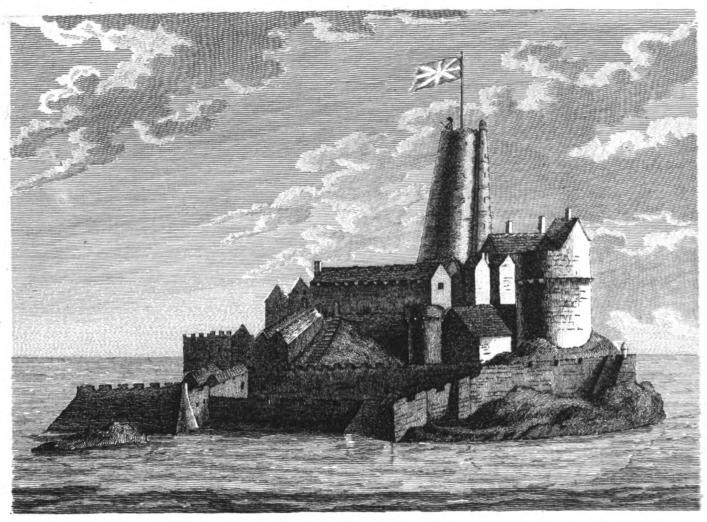 By the instrumentality of Divine Providence and during the night of Sunday 30th December last, the Powder Magazines situate in the great tower of Castle Cornet were ignited by a terrible lightning flash from heaven; through which the tower was wrecked, the exploded portions also totally wrecking all the building and out-houses erected on the Castle, but that which must be deplored is that in the explosion were killed and crushed under the ruins, the very noble persons of Mesdames the mother, and the wife of Milord Hatton, our honourable Governor, ladies whom beside the nobility of their birth and matrimonial alliances, God had blessed, in a high degree, with sentiments of piety, holiness, and other Christian and moral virtues and personal qualities, which set not only good example and were the subject of admiration in our midst, but contributed to making these ladies much loved and held in great reverence.

The painful and fatal event has filled the mind of all the inhabitants of this island with regret, fear, and sadness; and considering the extent of the loss experienced, the inhabitants have arrived at the conclusion that God’s wrath is much incensed against them owing to the[ir] iniquities, and that it is in their duties to humble themselves in a particular manner before His Divine Majesty, in order to seek His mercy and beseech Him to allay His judgment. These reasons have induced the Court to ordain that Wednesday next be observed by the inhabitants of this island as a day of fasting and of humiliation before God, during which day all the inhabitants are expressly ordered to find themselves in Church, in their respective parishes, in order to follow carefully the services prescribed for the exercise of such a holy and necessary good work; and to that effect the inhabitants will abstain from performing every manual labour in connection with their daily avocations and professions, under penalty, for those who shall infringe, of being punished according to the discretion of Justice.

The Ordinance referring to the prohibition of the purchase of material, furniture, and effects, after the explosion of the Castle Tower, runs thus:

On the aforesaid authority (Royal Court) it is expressly forbidden to all persons to buy clothing, furniture, or any other article provening from Castle Cornet, under penalty of criminal prosecution, the penalty to be left to the discretion of Justice. And if any persons have purchased any object from the wreckage, previously to the issue of the present Ordinance, they are enjoined to bring back before the Court whatever they might have so acquired, and the Court will ensure that the price of their purchases will be returned to them. The latter are hereby requested to produce their purchases within twenty-four hours following the publication of the present Ordinance, under the bann of being considered as accomplices and of being severely punished according to the discretion of Justice.

Where, in our most voluminous writers, to say no worse, do we find an account of the providential escape of this noble lord? I must profess that, in my judgment, considering his apparent goodness and merit, and the tremendous calamity that fell upon his family from the hand of Heaven, his person was almost miraculously preserved. There never was an incident more indicative of a special providence than this was. Therefore I may be excused if I give here a short memorandum of it. His lordship was governor of Guernsey, and settled, with his family, in the castle. There was his mother, his then wife (the Countess of Thanet's daughter), and divers of his children, and many servants. The castle stood upon the rocks washed by the sea; and one night, when all were in bed, and his lordship and his lady asleep, a storm of thunder fired the magazine of gunpowder, and blew up the whole fabric; his mother and wife, and some of his children, and some others, were killed right out. His lordship, in his bed, was carried and lodged upon the castle wall, whence was a dismal precipice among the rocks into the sea. His lordship, perceiving a mighty disorder, was going to step out of his bed to know what the matter was; which if he had done, he had been irrecoverably lost, but in the instant of his moving, a flash of lightning came and showed him the precipice; whereupon he lay still, till people came and took him down. And so was this noble lord wonderfully, or rather, as I said, miraculously, preserved.

For more details of the explosion, including an eye-witness report, see especially the Castle Cornet Scrapbook: comprising of letters, newscuttings and notes, in the Library, and Ferdinand Brock Tupper's The Chronicles of Castle Cornet, Guernsey: with details of its nine years' siege during the Civil War, and frequent notices of the Channel Islands: Guernsey, Redstone, 1849; and Ozanne, C., 'Contemporary Accounts of the Explosion at Castle Cornet,' Report and Trans. of the Société Guernesiase, 1930,pp. 41 ff. For Hatton, see Turner, H.D., 'Viscount Hatton and the Government of Guernsey,' in the Transactions of the Société Guernesiaise, 1969, pp. 415 ff.; and Edith Carey's Relics of the Past, 1909.