From the Report of the Royal Commissioners deputed to the Island of Guernsey in 1815, published by J. A. Chevalier and N. Mauger in Guernsey in 1817. This investigation into Guernsey law came about after vociferous complaints to the Crown by non-native residents, or Strangers, about their lack of property and other rights in the island, especially when it came to laws concerning debtors and creditors. 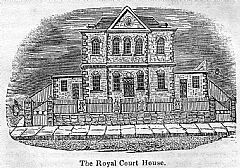 The Commission's proposals for reform were met with open hostility, albeit couched in reasonable terms. The report explains some of the interesting aspects of Guernsey law at that period very clearly. Here, how a native possessing even the minutest rente would avoid arrest and custody, a privilege not extended to outsiders, thus enabling them to continue business, use the goods or monies that would otherwise be confiscated, and even eventually to move their wealth—except for that one small rente—out of the island and out of any creditors' grasp, if it appeared the case was going against them!

Body or Goods of a Person liable to be taken, however small the debt or damages may be.

By the Laws now in force and administered by the Island of Guernsey, either the Body, or the Goods of any person not specially privileged, as in manner hereinafter mentioned, are liable to be arrested or attached at the suit of another, either for debt, or for damages claimed against him for any alleged injury to person, character, or property, or for the detention, or conversion of any chattel to which the Plaintiff lays claim.

Such arrest or attachment is made without any reference to the amount or extent of the damages claimed, the same course being pursued in cases of the most minute and trivial demand, and in those of more enlarged extent.

Without any Affidavit of the Debt.

Such arrest is made without any affidavit of the Debt, or Damages, or cause of action, and it depends altogether on the Plaintiff himself to fix the amount for which such arrest or attachment is to be made.

Form of the Process. Either Body or Goods may be taken, not both together. Occasional change from one to the other.

The Process by which such arrest or attachment is made, is a Warrant, under the hand of the Bailiff or his Lieut., permitting the Plaintiff to arrest the Defendant, or attach his goods for the sum alleged to be due, or damages said to be suffered, which Writ is for the purpose of execution put into the hands of Your Majesty's Prévôt, or Serjeant, or their respective Deputies.

This Process is directed in the alternative, either against the body of the Defendant, or his goods, but in no case against both together, though it sometimes happens that upon the representation of the Court, the person is released and the goods attached, or the attachment of the goods is abandoned, and the arrest of the person substituted.

So too it sometimes occurs that after the Plaintiff has taken his option to attach the goods he may apprehend an intention on the part of the Defendant, to remove himself out of the Jurisdiction, in which case he is allowed to arrest the body of the Defendant for the sole purpose of compelling him to give security that he will not quit the Island. This is done in the case of Natives even when they possess Rents, as well as in that of Your Majesty's other subjects sojourning in the Island. If an Attorney, being a native, is appointed, who will undertake to be liable for the Defendant, this arrest does not take place. No proof is necessary of the Defendant's intention to quit the Island. The creditor may act on his own surmise solely.

Defendant summoned to shew why arrest of his goods should not be confirmed and sale decreed.

If by virtue of the Writ the Officer has been directed to attach the goods, the Defendant is called upon by summons to attend the Court at its next sitting, and to shew cause why that attachment should not be confirmed and the goods sold to satisfy the Plaintiff's demand.

It is not customary for goods to be bailed, though it may be done if required. [....]

If Defendant's body taken he is committed, except he be bailed. Bail taken by Prévôt or Serjeant. Undertaking of the bail. Execution of writ notified to the Plaintiff. Recognizance kept by the Officer. No office for filing writs.

If, on the other hand, the Officer arrests the Body of the Defendant he is committed to Gaol, unless he can produce bail for the amount of the Plaintiff's demand, which bail, if produced, is taken by the Prévôt or Serjeant.

The undertaking of the bail in that case is to produce the defendant before the Court at all times when required in the course of the cause, and in default thereof to pay the amount of the damages, debt, and costs, that shall be awarded against him.

No more than one Bail is required by Law for the release of the person arrested, or of the goods attached.

The right of becoming Bail is exclusively confined to natives of Guernsey, and to persons admitted to the privileges of natives who are respectively possessed of real property in the Island, or according to the phraseology of the local law, fondés en heritage. [pp. 14-17]

The illustration is from Thomas Bellamy's 1843 Guernsey Pictorial Directory &c.

Explanation of the nature of Real Property in Guernsey [pp. 17 ff.].