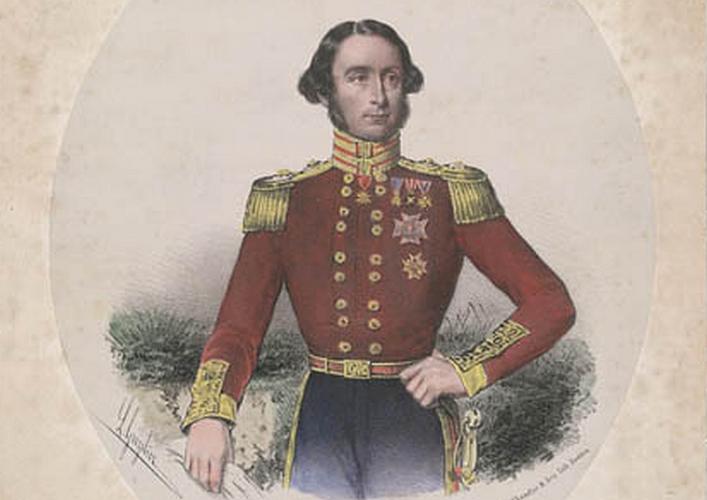 The Friends of the Priaulx Library generously contributed the money needed to buy this Order Book at a local auction. The Anglo-Spanish Legion was a voluntary force of the British Army, raised specifically to aid the Spanish during the Carlist Civil Wars of the 1830s. The Library is very grateful to all those who contributed towards the Friends' donation of this important material.

The Orders in this book are all issued from San Sebastian and signed by the Adjutant-General to the Legion, John Gaspard Le Marchant Jnr. General Le Marchant, later Sir John Le Marchant, was the son of Guernseyman Major-General Gaspard Le Marchant, one of the co-founders of Sandhurst Military Academy, who was killed at the battle of Salamanca in 1812. (The portrait above is from the Library and Archives Canada, Acc. No. R9266-2996, Peter Winkworth Collection of Canadiana.)

The Order Book contains references to several soldiers with local connections, including Lieutenant-Colonel Oliver De Lancey, Lieutenant Allez of the Queen's own Fusiliers and 'the late Colonel Tupper of the 6th Regiment.' The Book can be viewed on request. A letter was published in the local newspaper, the Star, in 1836, written by Duncan Allez with reference to a skirmish in San Sebastian between the Legion and the Carlists. See also 'Memoir of the late Captain John Allez, British Auxiliary Legion in Spain', in the Guernsey and Jersey Magazine, Vol. II, July, 1836, pp. 59 ff., in the Library, and the letter below from another local member of the Legion.

The British Legion in Spain.

To the Editor of the Star.

SIR: In your number of Thursday last, I read an extract from a letter in the Times, setting forth the sufferings which the volunteers for the Spanish service are said to have endured during the summer, which extract I beg to inform you, without impugning the veracity of the correspondent of that journal, is highly and ungenerously exaggerated. Having recently arrived from the seat of war, I must be allowed to possess a tolerable knowledge of the exact state of affairs there; and in the first place I deny that any Regiment of the Legion commenced its duties at two o'clock a.m. Every person in the slightest degree acquainted with the rules usual in active service, must be ware of the necessity if being under arms at least an hour before daylight, in front of an enemy, and instead of being under arms mostly every other night, such a thing has happened but very seldom, and only warranted by the movements of the enemy.

I deny that black bread, buffalo steaks and sour wine constituted our rations; those articles were generally, and particularly during the summer, excellent, and highly superior to the fare which usually fell to the lot of the British army under Wellington on the very same ground. The men, one and all, look up to our General with confidence, and resign themselves without murmur to the chances of war. As to hospitals, I challenge any one of the many traducers of this much-calumniated Legion to ask any of the one-legged and one-armed invalids, who are now in the hulk at Portsmouth, what treatment they experienced in those hospitals, and he will find them unanimously bearing testimony to the skill as well as tenderness of their medical officers.

The only assertion indeed throughout the whole communication which approaches the truth, is, I am sorry to say, the destitute state of the officers; but as far as regards the men, they are aware they did not land in Spain to sleep in feather beds; and equally so, that as long as such officers as Generals Le Marchant and Fitzgerald, and Colonel De Lancey, are foraging for them, they can never want anything that their zealous exertions can obtain for them.

Colonel William Le Mesurier [Tupper], of the British Legion in the first Carlist War, was killed at the storming of the Carlist redoubts in front of St Sebastian, in 1836. His case is interesting as furnishing a well-authenticated instance of premonition of death, he having told his friends before going into action that he had had a warning and knew that he should not survive.  [A Saga of Guernsey, p. 23.]

William Le Mesurier Tupper is commemorated in Ferdinand Brock Tupper's Sarnia: brief memorials of many of her sons, civil, miltary and naval, a .pdf copy of which can be downloaded here. See also the supplement to the Guernsey and Jersey Magazine of 1836 (Library strong room). There is a photograph of his monument in the English cemetery at Monte Urgull, San Sebastian, here.