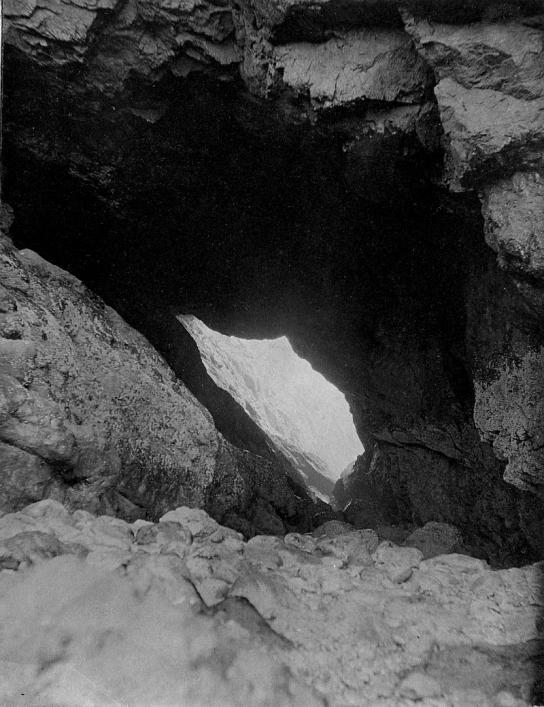 An extract from the Reverend James Cachemaille's fascinating guide to his adopted home, translated from the French by Louisa Harvey. How his friend the Seigneur discovered the Gouliot Caves, once a famous tourist destination, and a description of their 'Chimney' souffleur in a gale. The photograph of the caves is part of the Priaulx Library Collection and dates from 1900.

From this spot [the Saut Join], the path leading to the Gouliot caves becomes rather more difficult. It is not, however, dangerous; in fact people of all ages and with very indifferent power of climbing, manage to descend. At every low spring tide, (and it is only at such times that the Anemone and Tubularia Caves can be reached) groups of visitors may be seen on their way to explore these wonderful caverns.1 The descent in them may be accomplished through a long cavern called The Chimney, which is filled with great blocks of stones, of every size and shape, broken away from the roof from time to time.

Another and better way of entering the caves is to follow the path to the bottom, and then crossing over a low ridge of rocks, or by passing by it over boulders covered with seaweed. Having reached the beach in safety we enter a large and lofty vaulted cavern, containing five openings, the various views from which produce a most singular effect upon the observer. This cavern presents some surprising effects of light, and shade, and colour. It was unknown to the islanders, till one day in 1835, when Mr Le Pelley, Seigneur of Sark, was exploring this which we may call the upper cave, it occurred to him to enter a long tunnel running from it seawards, at the end of which he perceived a glimmer of light.

Halfway through this tunnel, he sank down into a hole full of water up to his waist; having got through this he found himself within a series of caverns he had never seen before, and of which he had never heard. There was an opening half filled by the sea in one direction; there was another opening at the top of his path to the left; at his right was a long, tortuous, dark, and narrow cavern, and again another smaller cavern towards the sea, and he then perceived that there was an outlet to the north covered with sand, and quite easy of access. All this was perfectly new to him, and he was enchanted with it. Although the study of natural history had not become so general as the writings of Gosse, Lewis, Forbes, and others have made it, still the multitudes of marine animals of every form, their bright and various colours ornamenting these caves in a way he had never seen in any of the other caverns of the island, filled him with the greatest admiration, and caused him to publish his discovery at once. He made enquiries of the native Sarkmen, especially those who frequented the bay for ormer fishery, but not one had seen or heard of these wonderful caves.

Mr Le Pelley invited his friends and others, who from time to time visited Sark, to come and see his discoveries, and was himself their guide. But it is only at the lowest spring tides that one can penetrate into these caverns dryshod, from the exterior or northern entrance. Nevertheless, as many could not restrain their impatient desire to see these marvels, until the proper tide should serve, they contrived to wade in by the tunnel through which Mr Le Pelley passed the first time he saw the caves.

The news of the discovery reached the eras of Dr Acland, Professor of Physiology at Oxford, who came to Sark with his family, bringing letters of introduction to the vicar, requesting him to show him the Goulliot Caves, as he had come for the express purpose of seeing them.

Having arrived at the most interesting portion of the cavern, the vicar was pointing out its various beauties to the doctor, but he was dumb, although gazing at everything and it almost seemed to his guide that the doctor was disappointed; when all at once he cried out, 'This is a wonderful cave! This is indeed a wonderful cave.' Then he plunged into the water up to his waist, and began tearing off specimens with both his hands, and filling his pockets with sponges and all sorts of zoophytes, etc. His visit was often repeated, each time with renewed enthusiasm and delight, whilst the collection overflowed. He gave the name 'Tubularia Cave' to one of the smaller caverns. He told the vicar that he had explored the coast of Ireland, Scotland, and England, but that he had never seen anything superior, or as marvellous, as these caves. On his return to Oxford he sang their praises to Mrs Buckland, (wife of the then Professor of Geology) in such sort as to induce her to visit them, with her sons. Since then they have been visited by many men of note in the scientific world. Dr. Bowerbank came twice to Sark on purpose to see them, and spent three whole weeks in daily examination of their contents, adding to his collections therefrom no less than 33 varieties of European sponge.

Many strangers visit these caves every year, and every one wishes to carry away some memento of his visit. Collectors have removed a great deal of what was of special interest, so that the walls are becoming more and more bare, and much of their beauty and interest are lost. 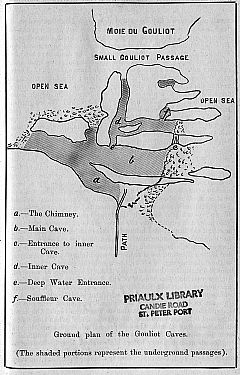 Some years ago, two visitors, who chanced to be excellent swimmers, were impelled by an irrestistible desire to inspect these caves when half-filled by the sea. This they more than once succeeded in accomplishing during calm weather, and of course, described the effect as most singular and enchanting. In this vast natural aquarium they were delighted beyond measure to behold (what were then) almost unobserved denizens of the mysterious deep, playfully disporting themselves in brilliant clothing outside their dusky shells; myriads of anemones in blossom; madrepores and tubularias, bursting as it were into flower! Now seemed the arched roofs and rocky walls to live—so covered were they with gorgeous colour and moving forms. Tempting, truly, must such a sight always be; nevertheless it is evident that too great risk will have to be encountered, even by the strongest swimmer who may attempt to repeat this dangerous experiment.

A visit to the exterior of the caves during a south-west gale will offer a most interesting spectacle. The tide rushes along with extreme rapidity; the wind roars; the waves dash tempestuously through the larger openings, and break into clouds of foam within the vaulted cavern. Then indeed there is an awful 'noise of many waters'—a frightful crashing; the liquid element, turned into misty foam, flies like smoke though the crevices and up the 'Chimney' which now indeed deserves its name, for the wind, roaring up like a blast furnace, belches out the sea-spray in the form of thick white smoke. It is impossible to approach the upper opening without a feeling of terror, lest the violent shock of imprisoned breakers should detach and bring down masses of rock even from the roof. All the lower caverns are full at high water, and so is the major part of the larger caverns; there is here great pressure on the windward side; but at the top of the tide there is less noise heard, and the current issues forth through the leeward opening, now reduced to a milky stream of hissing waters.

From the same book: The School for Girls. See also: Lady climbers, 1880.