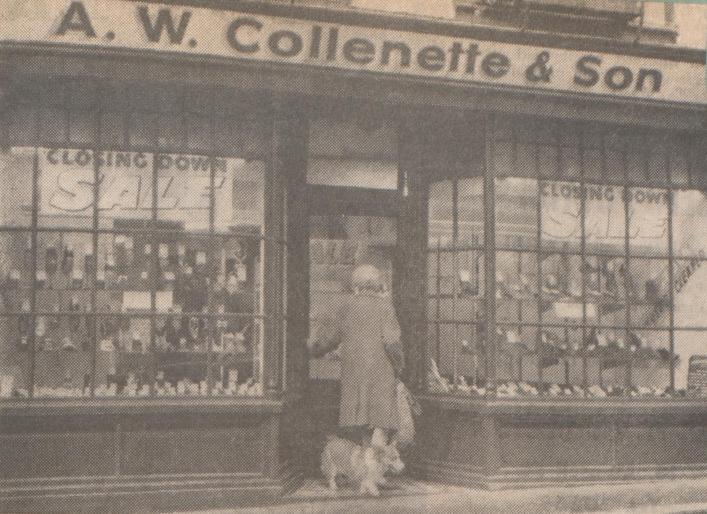 Businesses come and go in the world of high-speed commerce, but the 'Closing Down Sale' notice in the window of a long-established island concern always involves a little nostalgia, a little sadness, for someone. So it is with the shoe business of A W Collenette and Son, one of the Town shops which islanders have come to take for granted. From the Guernsey Press, c. 1969. [Scrapbook No 24, Staff F, p. 153.]

Mr Stanley Collenette, the present proprietor, believes that the business may be well over 100 years old. It was founded at Castel by his grandfather, Nicholas Collenette. Accounts have been traced back to 1906, when Mr Collenette's father, Arthur, was in business with his father.

It was in 1920 when Nicholas Collenette and his son moved into Town and set up shop in Church Square, in what often is reputed to be the oldest building in St Peter Port. Fourteen years later, Mr Stanley Collenette joined the firm, aged 13.

When the Second World War came, Mr Collenette and his family left the island. It was when walking up Smith Street that Mr Collenette heard that Guernsey was to be declared an 'Open Town.' Immediately he phoned his father and suggested that they all leave the island together. They did this, an hour later, in the last mailboat to leave Guernsey before the Occupation of the island by the Germans.

Change was left in the till at the little Church Square shop, for the Collenettes intended to return and carry on as soon as their wives and children were safe. But this was not to be, and it was not until 1945 when the shop opened again.

Mr Collenette recalled the first invoice of those post-war days ... a few laces, a couple of pairs of socks and a little polish, was all they were able to buy to replenish their 'stocks'!

So the business carried on, after the war years, gradually making its mark, by steady and quiet service, in the records of island life. There will be many people who will regret the ending of this long-established business but Mr Collenette's many customers surely will wish him a happy retirement, after 31 years in business.

The shop premises certainly are one of the oldest buildings in St Peter Port,and on one end wall can be seen the rust marks of hinges on which, it is believed, once hung the ancient gates of the Town. The style of the building, which gradually becomes wider as it gets higher, also points to its antiquity.

Greffe records show that a Mrs Hubbard was living on the premises in 1676. The discovery, made by Mr Collenette's daughter, shows that the building is at least 293 years old.

In the cellars, the ancient walls can still be seen, and these are built, like so many Town buildings, on the shingle beach which once ran right up into what is now High Street. Five cylindrical holes in the walls were used as primitive 'safes,' Mr Collenette explained. Apparently, cash was put into the hole, a stone was sealed into the entrance—and the money was safe!

Still living in Guernsey is Mr Collenette's mother, now 87, and in very good health. Mr Collenette is married, with a son, a teacher at Plymouth, and a daughter, who is employed in Court Row.