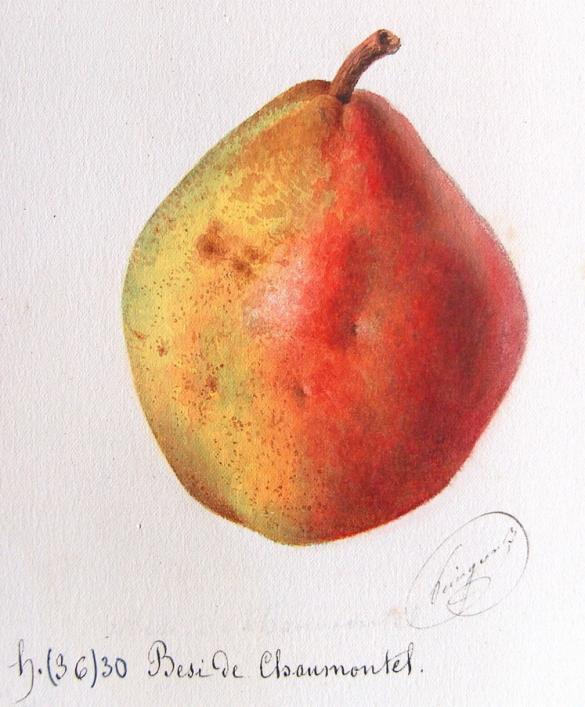 Pears. Both Jersey and Guernsey are remarkably successful in, and have gained much reputation for, the culture of pears, whose export has long been a matter of considerable profit.2 As many as fifty-nine named varieties are cultivated in Jersey, some of which are very excellent, and a few of them keep well and range over many months for table use. Many bergamottes, doyennes, beurrés, and others known familiarly in England, are very sucessful; but the most remarkable in both islands is the chaumontel, which certainly attains there its greatest perfection, owing, no doubt, to the peculiarities of climate it enjoys, and the absence of night frosts when the final ripening approaches.

Great attention also is paid to the culture. These pears are usually plucked on or about 10th October, but are not fit for use for several weeks, being in perfection about Christmas. Those weighing sixteen ounces are regarded as first rate, and fetch good prices.3 Pears of this size average in value from four to five pounds sterling per hundred in the Guernsey or Jersey market; but as they diminish in size and weight, the value falls rapidly, the numerous small fruit being considered only fit for baking, although in point of flavour they are little inferior.

Chaumontel pears of extraordinary size are sometimes obtained by removing most of the fruit from a tree. The largest and best grown fruit on record, was grown at La Porte in Guernsey, in the year 1849. It measured 6½ inches in length, 14½ inches in girth, and weighed 38 ounces in English weight.

'In 1849 an 'extraordinary fine specimen' of a Chaumontel pear, weighing 38 ozs., grown at La Porte, was sent by [Theodore Augustus Corbin] to Her Majesty Queen Victoria and a letter acknowledging its receipt was duly received saying that it was very much admired by the Queen and Prince Albert. A cast of the pear has been preserved.' [Quarterly Review of the Guernsey Society XX (3), Autumn 1964, p. 57.]

'No chaumontel weighing more than 30 ounces appears to have been produced in Jersey. As a group of pears from a single tree, there is perhaps no more remarkable instance recorded, than one occurring in the season of 1861, when of five fruit obtained from one tree, in the gardens of Mr Marquand, of Bailiff's Cross, Guernsey, four of them weighed together seven and a half pounds. It is worthy of remark that in this case the tree, though usually prolific, bore only these five fruits. The pears in question weighed respectively 32½, 33, 31½, and 22 ounces. [He later remarks that] about 10,000 bushels of fine Chaumontel pears and 3,000 bushels of common fruit are exported from Guernsey annually. The fine pears are sold by the hundred , and frequently realise very large prices.' [From David Ansted's 'The Channel Islands,' 1862, pp. 488-90; p. 507.]

On the occasion of our last Fruit Show, a Chaumontel Pear of perfect shape, and of the remarkable weight of 2 lbs 4½ ozs English weight, was exhibited by my neighbour Mr T A Corbin, and subsequently transmitted by him to Sir George Grey, with a request that it might be respectfully presented to Her Majesty. You may possibly recollect that I some years since transmitted a Chaumontel Pear to the Society, of the weight of 29½ ozs English weight, being the heaviest which had hitherto been produced in any of our islands, and of which, if I mistake not, a model is to be seen in the Society's Museum. It may not prove uninteresting to know that the Pear produced by Mr Corbin grew on a Quince-stock, and that no artificial means were employed to increase the weight of the fruit, of which there was in addition a fair crop on the tree itself; the soil is a deep strong brown loam, which is occasionally manured. [The Journal of the Horticultural Society of London, Volumes 5-6, 1850, Proceedings, p. vi.]

The fruit spread, even on ordinary occasions, on the hospitable board after dinner, is here sufficient both in quantity and quality, to astonish a newcomer. Peaches, nectarines, apricots, grapes, apples, pears, and among these the magnificent chaumontel, are devoured as a matter of ordinary habit [....] In short, a sumptuous dessert such as is provided in England only in great houses and on great occasions, is seen in Guernsey almost every day, and people usually eat five or six large peaches, instead of one. From 'Sir George Head's remarks on the Island of Guernsey,' Guernsey and Jersey Magazine, Vol. V, 1838, p. 111.

From Jacob’s Annals: 'In the production of fruits, the gardens of this island are no less remarkable: the superiority of its Chaumontel pears are well known: a superiority which the grafts imported into England do not retain: yet, in this it yields to its neighbour, Jersey.* And I may add, for the consolation of the English gardeners, that this pear, even in these islands, is reared under the warmest walls; succeeding but indifferently in any other situation.'

The Editor then notes: *I should suppose this remark applies to size only, and perhaps this may not be quite correct, for it appears by the Star of Oct. 19th 1828, that a pear (a Chaumontel) was gathered in a garden at Vauvert, the property of D. De Lisle, Esq., occupied by his tenant, the weight of which was upwards of 27 ounces. I have in my garden both standard and dwarf Chaumontel pear-trees, and some also against a south wall; the flavour of the standard is equal if not superior to those against the wall; I cannot make a comparison of their quality with the pears of Jersey, not having tasted any from thence: but, not being a native of Guernsey, I may be allowed to say that I never wish to eat any finer or better than those of Guernsey, and that I have found a pear of 12oz. of finer flavour than one of 18oz.

The Star of November 22nd, 1890, republishes an extremely detailed technical description of 'The cultivation of pears in Jersey' by A Evans, originally from the Gardeners' Chronicle, in which he gives some hint of the decline of the once ubiquitous Chaumontel in later years:

The varieties grown for early supplies are Citron des Carmes, Jargonelle, Williams' Bon Chrétien; then follow Louise Bonne, Maréchal de la Cour, Beurré d'Amanlis, Duchesse d'Angoulême, Pitmaston Duchess, Doyenné du Comice, Chaumontel, Glou Morceau, and Easter Beurré. Of the above, Williams' Bon Chrétien is more extensively grown than any other early pear; Beurré Diel is found to crack in some parts of the island, and it is being less planted than formerly. Doyenné du Comice is gaining favour, and is being much increased; Chaumontel is really the Jersey pear, and it is grown in very large quantity; but growers say that they cannot grow it quite up to the standard of former years, but on certain trees and aspects many fine samples are still produced. There are, of course, many other varieties of pear grown for dessert, but this is their selection. The culinary pears grown are Belle de Jersey (syn. Belle Angevine) and Catillac or Pound Pear. The trees are planted rather thickly together, and currants and gooseberries are planted in the intervening spaces, and remain until the trees meet.

3 Gazette de Guernesey, October 11th, 1806. p. 159: William Crick is looking to buy Chaumontel pears, of over 9-10 ounces each only, and will pay 25 shillings per 100. The pears must be picked carefully and brought to his house, near the Grange. From Bellamy's Pictorial Guide (1843): Large chaumontel pears, being generally destined for presents in England, fetch a good price, and at times 3l. to 5l. per hundred is readily obtained for them, if they weigh from 12 to 18 ounces. The small ones, which are generally the largest crop, may be obtaines exceedingly reasonable by the bushel.

See also William Le Cocq's letter of 1799; and Brehaut, T Collings, Reverend, Cordon Training of Fruit Trees: Diagonal, Vertical, Spiral, Horizontal; adapted to the orchard-house and open-air culture. London: Longman Green Roberts, 1860. Brehaut knew what he was talking about; he exhibited six Belle Angevine pears (presumably from his house in Mount Row) at the Great International Fruit Show at Kennington, on November 6th, 1872, which were the 'best and heaviest six in England.' Guernsey Magazine, December 1872.

Oct. 15. This was a most brilliant show of autumnal fruits and flowers. The specimens of apples and pears were, perhaps, the finest ever produced; and many deserved particular notice. Some Belles de Jersey pears, of extraordinary magnitude, were placed there by Col. Le Couteur as a present to His Majesty. Some Chaumontel pears were exhibited by Mr. P. Langelier, fifty of which weighed 41 lb.; two weighed 96 oz.; twelve Beurré d'Aremberg, by Mr. James Hammond, weighed 9 lb.; twelve Crassane, 7 lb. 14 oz.; twelve Duchesse d'Angoulême, 13|lb.; twelve Bon Chrétien d'Espagne, 9 lb.; and two bunches of out-door grapes, 5 lb. [Comet Oct. 17.]