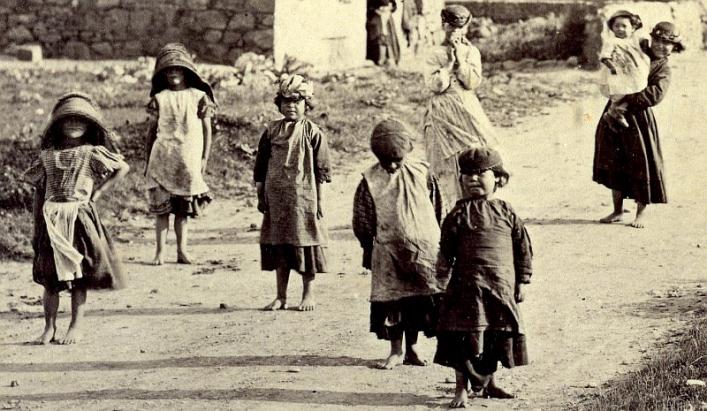 During the First War money and food was short amongst many islanders. The Medical Officer of Health delivered his report on the state of the Island's health for 1915 in September of 1916. In it he suggests an way for the poorer classes to save. The detail is from a photograph by Singleton, 'Rocquaine, 1870' in the Library Collection.

Towards the end of the year neglected children were more numerous than usual, and in a few instances the mothers—the fathers being at the Front—required firm and constant pressure before any improvement was effected. Such cases were brought to the notice of the AA and QMG1 and the Constables, and were almost entirely confined to the Town parish.

It is greatly to be regretted that now when the provision of boots and stockings must be such a strain on the finances of the poorer classes, that more children do not go about with bare feet.

The summer is the time to start this practice which greatly benefits the health of the average child. When once the beginning has been made the child will become acclimatised and able and willing still to go about barefooted, even in very cold weather. There is one proviso, however, the child must be very well fed.

During last winter I saw many badly fed children with boots so bad that their feet were often constantly sodden with wet, and stockings with only parts of the feet of them left. The parents of those children were rightly considered to have neglected them, and measures were taken to make them provide water-tight boots.

If my suggestion be generally adopted, the money spent now upon boots and stockings which can be so badly afforded, can be spent upon food instead. Parents will then find their children happier and healthier, and with much less tendency to catch cold than before.

In support of his contention Dr Bishop points out that the men in the Navy, no matter how cold or wet the weather, 'usually go about their work with bare feet, and are magnificent specimens of manhood.'

Dr Henry Draper Bishop was the second Medical Officer of Health for Guernsey. Many of his rather more sensible recommendations were implemented, such as the eventual setting up of a Schools Health Service; he recommended this in 1906, but although he got a couple of dedicated School Nurses out of the States, no Schools Medical Officer was appointed until the year of his retirement, 1935, and that rather as an afterthought. Several churches ran charitable funds for providing children with shoes. See The Star, December 4th 1916, for the main charity, the St Peter-Port Boot Fund.

The story of health services for children in the Island, written by Richard Hocart, can be found in Dr D. Jeffs, ed., One Hundred Years of Health: The Changing Health of Guernsey 1899-1999, Guernsey, Guernsey Board of Health, 1999.

The book includes chapters on the historical overview of health in Guernsey, the Town Hospital, sanitary reform, the Victoria Cottage Hospital at Amherst, the mental health service, health in the Occupation, the setting up of the modern system of subsidized healthcare, the Ambulance and Rescue service, health in Alderney, and the history and function of the then Board of Health, written by local historians and experts in the field.