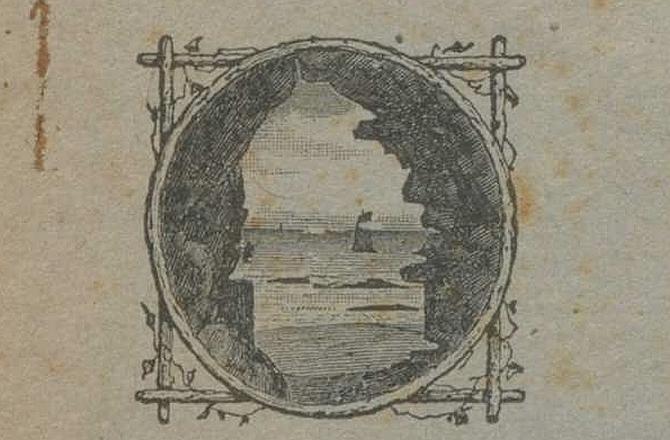 The largest cave in Guernsey, once a major tourist attraction. From the Monthly Illustrated Journal, (Guernsey Magazine), October 1888, p. 85; and the cave in 1951, when a party of three including a press photographer go in search of bats there. The illustration is a detail looking out of the Creux Mahie from a small 19th century visitor's guide to the cave.

CREUX MAHIE, writes a correspondent, is a large cavern on the coast of Torteval. It has an average height of fifty feet, and is over two hundred feet in length, though it is said that no one has ever been to the end of it. The entrance is small, but still easy to enter, as there are steps leading into it. Guides are always willing to show it to tourists or others, for a small gratuity, and will nearly always be found near it, or working in some neighbouring field. Formerly they used to take with them a bundle of furze, which they lighted and thus illuminated the cave, but as it (the cave) was soon filled with smoke, which sometimes rendered the entrance difficult to find again, it could only be visited once a day. Last year the guides adopted a new plan, which answers the purpose nicely, as the cave is free from smoke, and can be visited at all times of the day. They illuminate it by means of torches, simply made of rags dipped in paraffin and twisted round a stick, the light of which, when half-a-dozen of them are lighted, gives the cave a grand appearance.

[The Creux Mahie] lies at the head of a small creek, and appears to have been formed by the action of the waves wearing away the softer portions of the rock. At some distant period, a large piece of cliff above the cave has fallen down, partially blocking up the entrance, and forming a sort of terrace which keeps out the sea. Rude steps lead down from this terrace to the floor of the cave; and when the eye becomes accustomed to the imperfect light, or that the place is illuminated by a bundle of ignited furze, the lofty dome-shaped vault, and the huge masses of detached rock which seem to have been rolled together by the action of the waves, present a striking and impressive scene; while a feeling of mystery is excited by smaller caves and fissures in the walls of the cavern, which although easily traced to their termination, are confidently asserted by the peasantry to lead deep into the bowels of the earth, even to the very centre of the island—a tale told also, and with quite as little truth, of the Creux des Fées at the Hommet.

The approach to this—the largest cave in Guernsey—is comparatively easy. In fact, it is the only one which has a signpost to indicate its position to motorists passing along the Torteval road. A grassy lane opposite a grey-painted pump and a granite trough leads almost straight onto the cliffs. The cavers three went over the top-level with hovering sparrow hawks looking for mice—and down the steep shaley incline which takes a sharp left-turn halfway down. From this point we could see the entrance to the cavern, but within a few feet of it there had been a slide of rock, and deposited in the narrow gully which runs to the sea must be hundreds of tons of pinky red granite. Huge slabs of eight to ten feet across are mingled with great splintered fragments. When the fall occurred it must have created a terrible noise, much like that experienced in a quarry when rock blasting takes place. We examined the extent of the rockslide and concluded that it had occurred as recently as last winter. Grass, however, has started to grow on the higher ledges, and water trickled down the face of the sheer cliff, where the fall occurred.

A dozen stone steps led in to the cave from the bottom of the path, and in we went. At first, not even with three torches could we see anything, but once accustomed to the blackness the gloom changed from utter black-out to a dimly-lit atmosphere. The first thing I noticed was a peculiar white deposit on many of the rock walls, reflecting a certain amount of light. The salty crust was covered with great drops of 'perspiration,' which shone like a myriad of jewels in the torchlight. We decided to make a circular tour of the cavern, starting on the right hand side. The cave into which I had been before the war was not as we had expected blocked by a fall of rock; after creeping round the edge I discovered a hole which plunged into utter darkness. Feet first and sitting down, I just managed to squeeze through and slid to the floor. It was wetter and more dismal in there than anywhere in the whole cave. We could not stand. We dare not sit. We just crawled like worms as far as we could. Then a faint glimmer of light was seen ahead and it came from another entrance to this same eerie chamber, through which we gladly scrambled to the main cave. In the faint light we could see our hands were like sweeps' and our clothes blackened and dirty. At the back of the cave we found another small chamber with just room for one man to enter.

From the rear of the great hall we were so elevated as to be able to see only the light from the entrance without seeing the hole. Every rock around us was wet and slimy, and approaching the entrance again, via the west wall, was like walking on an icy surface.

Almost thankful to be out of this black hole, which is reputed to have an entrance to Torteval Church, we bathed our black hands in the sea. [There are several photographs accompanying this article.]

'we have visited together the Cave Mahé, where my beloved’s dexterity in entering on all fours gave me as much gratification as any other of the natural beauties which the scene presented.'

Report and transactions of the Soc. Guernesiaise, 1890:

The roof appears to be a fault plane partly coinciding with the boundary of a diorite vein. The slope of the cliff west of the cave is the upper surface of another vein of the same nature. The following measurements were taken. The cave descends from the mouth inwards until a depth of about 20 feet is reached, then the floor continues at the lower level to a distance of 76 feet from the mouth, then rises at an angle of 29° for a further distance of 109 feet, making about 180 feet for the total length of the cave. The greatest width is 60 feet. The height at the mouth is only 5 feet, but in the centre at least 18 feet. At the further extremity of the cave the floor meets the roof, at a point about 50 feet in vertical height above the lower level of the floor. The direction of the level part of the cave is nearly south to north, N. 5 E., but the ascending portion bends considerably to the west. Mr. Collenette presented a detailed plan of the cave.

See also Reminiscences of the late Amias C Andros, II, pp. 188-9, in the Library, for a description of Adolphus Collenette and the Société Guernesiaise's visit to the cave in 1894.