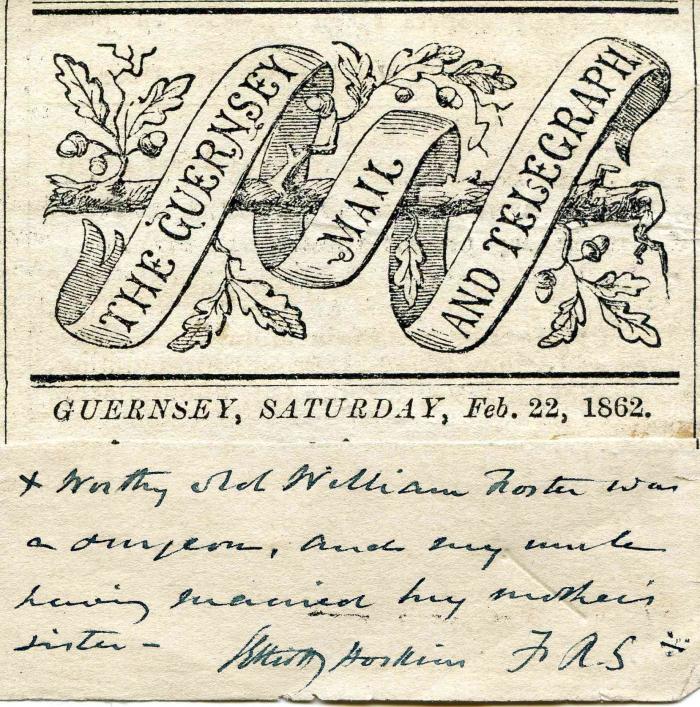 The Guernsey Mail and Telegraph, February 22, 1862.  'To the Editor of the Mail and Telegraph.  As the following lines were the result of an hour’s innocently playful reminiscence, the Editor of the Mail and Telegraph might not be so terribly serious as to reject them.  Small localities like this for every reflective mortal who has lived much through the seven ages of life, unavoidably furnish temptations to personal allusion.  It is not the less true that, whether they be an FRS, a Sieur Pierre Robin, or an industrious and modest Charles Ozanne, not one of three acquaintances that LÔ DEBHAR* has presumed to notice here has ever inspired any other feelings than those of unfeigned respect and regard.'  This is from a cutting in the Priaulx Library collection. The note above was made at the bottom of the cutting by Samuel Eliott Hoskins, FRS.

The first I knew, in life’s heyday,

Had English names, old Fav[e] and May,

When men spoke jargon to their dogs,

Though strange to tell, they called their hogs

To which all gentles will demur;

Was Roussel, his loved cow Flieurie,

Just as the curs, in many a dale,

The turkey-poult, reared by Nico,

Just as in Normandy, ‘pico.’

A book in vellum wrapt and bound.

As ev’ry sturdy Churchman ought,

Against opinions sound and new,

When ancient Fav[e] and May both died,

Rover, the spaniel, was our pride,

Whose nephew is an FRS¹.

Could Rover tell of all he saw,

When simple hearts with scarce a flaw,

Whose portly gates were ivy-wreathed,

Behind which men of honour breathed,

Who scorning ease and strong of will,

Kept up their world’s tradition still,

Laughed at vain sneerers who repine

Rover, though but a hound, would snarl at

Narcissuses who fawn and rat.

A huge frog was his dainty dish,²

And, otter-like, he gobbled fish.

Pompey, half pointer and half spaniel,

Would have outwitted ev’n a Daniel,

A miracle of doggish mirth,

Some witch presided o’er his birth,

That, each week’s first day, a gay crew,

On saddled horse, with whip or cane,

Rode in procession to Rocquaine,

When that blest month of Rome’s old year

Of whom grand poets fondly sing,

And ushered in a Saviour’s BIRTH,

When ev’ry Celt a race would run

In honour of the Dazzling Sun.

Pompey, commander of the host,

Fierce as a wolf, lean as a ghost,

With Crapaud at his side, was there,

To watch some bridegroom’s flaunting bride,

To tear a gown and spoil a ride.

I well remember, when a whim

At Vason tempted us to swim,

My comrade, Pompey, was quite vain,

My flowered waistcoat wrought in Spain,

Arrayed the whelp, who barked with joy,

Then punished an unruly boy,

Plunging (I hear his wicked howl)

In a quagmire deep, green and foul,

Where water horsetails love to dwell,

And shed around a Stygian smell.³

As they once did, when, cool and calm,

Just as, to clench a noble psalm,

Among the saints, and felt no shame!

Still, as they crouched, awhile, discreet,

Meek and demure, close to our feet,

We fancied that impious rout,

Spite of their four legs, were devout.

Of hound and cur in house of pray’r!

For, just as, with loud nasal twang,

The giver out, famed Robin, sang

Sent forth a most infernal howl.

²There were, of course, no toads to feat upon in Ghernernia the blest.

³La Mare ès Litres. Why so called. What had it to with the funeral girdle or band, listre, of the Gallican Churches?

* Lo-Debar is the name of an Aramaic town in Gilead and occurs in the book of Samuel and 2 Kings 25:28. The meaning of the name is uncertain, either 'having no pasture', or 'place of no communication'. See A Cyclopedia of Biblical Literature. This might indicate that the writer is someone who knew Hebrew and Aramaic well, a Church minister - or possibly even Osmond de Beauvoir Priaulx, founder of the Library! The inhabitants of Gilead are immortalised in the Bible as uncomplicated and hospitable, and Lo-Debhar provides refuge to the deformed son of Jonathan after the death of his father and grandfather. Debhar or Dâbhâr is 'the prophetic Word of Yahweh' - divine revelation.

¹Worthy old William Foster was a surgeon, and my uncle having married my mother’s sister: S Elliott Hoskins FRS (see heading above)