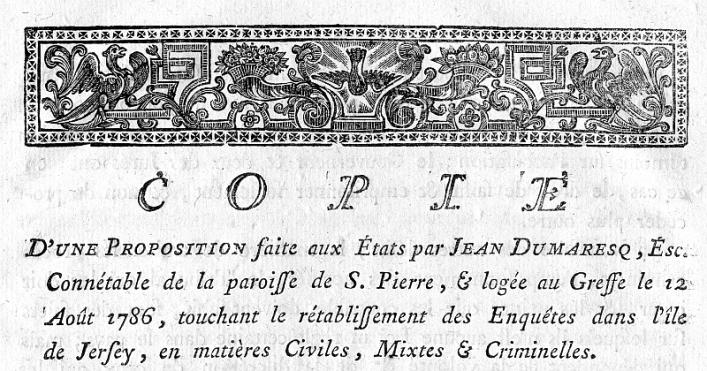 From the Star of February 18th, 1836. Another way in which Jersey differed from Guernsey—the justice system; the Petite and Grande Enquêtes. The Star's readers must have been assumed to be unfamiliar with legal procedure in the sister isle, as the newpaper explains it at length. Marin was sentenced to transportation for life.

The long expected trial of the French music-master LOUIS MARIN, for having been a party to the suicide of Miss MARY ANN BETHEL, by procuring for, and administering poison to her, took place last Monday before the Jury or Petit Enquête in the island of Jersey. The Jury consisted, as is usual in these cases, agreeably to the laws of Jersey, of the Constable and twelve of his officers, belonging to the parish where the crime was committed, presided by the Viscount. The Jury found him guilty of the crime laid to his charge, and we are informed that they did so unanimously. The prisoner, however, availed himself of his right to the Grande Enquête, which is composed of twenty-four of the principal inhabitants of the three parishes nearest to that in which the crime was perpetrated, eight of whom are drawn from each parish.

The trial was to come on this day. Although a bare majority of a Petty Jury suffice in Jersey to condemn a criminal, subject of course to the appeal, it is not so with regard to the Grand Jury, for if only five out of the twenty-four members declare him innocent, or as the technical phrase is, more innocent than guilty, he is to be acquitted. MARIN had therefore still a chance of escaping—a slender one certainly—but still one not to be neglected; for although the petty Jury condemned him, it should be recollected that such Jury was composed of persons who were not selected as his judges in reference to any capacity on their part to weigh evidence, but simply on account of their being Constable's officers or assistants, a class of men who, in a country parish like St Saviour's, cannot be supposed to possess any very considerable degree of intelligence, and who, as well from their rank in life, as from their residing in the immediate neighbourhood of the place where the crime was committed, are very liable to partake of, or be influenced by, popular feeling, which, in the case under consideration, is understandably very strong against MARIN. Whereas the Grand Jury is composed of eight of the principal gentlemen from each of the three parishes nearest St Saviour's, and, as already stated, if but five of them should declare him innocent, he must be acquitted. That he will be pronounced guilty, and doomed to die, is perhaps what we must expect, seeing that the law makes no distinction between one who lays violent hands on a fellow creature, and one who, like MARIN, becomes party to a suicide.

From the Comet, September 19th, 1836, concerning a murderer in Jersey named Caillot:

We have said that Caillot was condemned to death by a majority of one: this requires explanation for the sake of those who are unacquainted with the mode of trial by Jury in that island. The Grand Jury is composed of 24 gentlemen, and if nineteen are of opinion that the prisoner has been guilty of wilful murder and five are of contrary opinion, the minority of five govern the majority of nineteen, and therefore the prisoner escapes!! Now, in the present case, twenty of the jurors were against Caillot, and four in his favour, so that his life may be forfeited by the majority of one, according to the law in Jersey.

Like Marin, Caillot had originally been found guilty by the Petty Jury and then appealed to the decision of the Grande Enquête.

The original charters of the Channel Islands call for each island to appoint twelve Jurats to conduct trials. This was to apply in all cases except those of treason, and assault or impediment of the Bailiff, which were to be tried by the King. While the inhabitants of Guernsey seem to have been fairly content with the workings of the Royal Court and the behaviour of the Jurats (with the proviso that it was always understood that they were arbitrary and terrifying and quite often used to favour their family and friends), the same cannot be said of Jersey. The issue of juries there was not sorted out until 1864.

'Enquêtes' took place in Guernsey; in the 19th century the Jurats and Officers of the Court are frequently reported as gathering evidence by means of an enquête before proceeding with a trial. (The Guernsey use of petites and grandes enquêtes and cases tried au petit and au grand criminel is exhaustively explained the Second Report of on the State of the Criminal Law in the Channel Islands, 1848, pp. xxi ff., in the Library, but is very different from the usage in Jersey.) In a case in 1235, for example, several Guernsey residents petitioned for a case, originally held before a jury of 12 at the royal assizes, to be retried before a jury of 24 as an enquête. Edith Carey points out that in the notorious case of the Cauchés family, which took place in 1556, the three women who were eventually burnt at the stake were first brought before an enquéste and by the testimony of their neighbours before the Crown Officers, it appeared that they had always lived honest, respectable lives and were deemed incapable of theft. This record of the neighbours' verdict is a valuable proof that the old enquéste du pays was still in use in the island in criminal cases. It was a survival of the Norman inquest of peers, a jury supposed to have knowledge of the facts of the case, and was held informally before the Crown Officers or the Justice of Assize, and only the rapport of the evidence produced a the regular trial before the Bailiff and Jurats. [Edith Carey, 'Social Life in Guernsey in the Sixteenth Century,' Report and Transactions of the Société Guernesiaise, 1920, p. 18.]

A few years afterward Jehanne Becquet and her father elect to undergo the same procedure at their trial. Records of such inquests are scarce, perhaps because the this type of inquest was uncommon. Two inquests of the same period can be found in the 1848 Second report of the commissioners &c., including the inquest into the accidental death in 1597 of the very young nobleman Walter St John, a copy of which was sent to Chancery by the Governor, Sir Thomas Leighton. This enquête, however, was held before the Jurats and resembles a modern coroner's inquest.

It was always possible to opt for the ancient enquête system in Jersey, rather than be tried by the Royal Court. The Petite Enquête was really just an examination of evidence, or enditement, to ascertain whether there was a charge to answer, and usually consisted at that time of six men of the parish. Fear that the Jurats in Jersey were 'packing the benches' in the Royal Court, and that someone could be convicted having been tried by the Baillif and a mere two Jurats, and other similar concerns, led Jean Dumaresq, Constable of St Peters, to propose the restoration of the enquête as the principal method for trial in 1786. In 1789 he and James Hemery prepared a very interesting but complicated document setting out the law and procedures as they then stood in Jersey, at the request of the Lords of the Committee of Council for the affairs of the Channel Islands, who were considering his submission. This was replaced in January 1790 by a second, clearer, resumé of the law of Jersey by Thomas Pipon and John-Thomas Durell, King's Procureur and King's advocate respectively. Dumaresq had campaigned since 1786, succeeding in gaining the States' authorisation to put his case to the Committee in October of that year, as 'Articles, Proposés par les Etats, pour rétablir le droit d'Enquête dans l'Ile de Jersey,' outlining the exact procedure they recommended for dealing with criminal and civil cases. He and Hemery objected, however, to the 'mysterious' method of appointing the 24 jurors in the Grande Enquête, and also suggested the number be reduced to 12.

For the original documents, see A Statement of the mode of proceeding and of going to trial in the Royal Court of Jersey, in all cases, criminal, civil and mixed: prepared in consequence of an order from the Right Honourable the Lords of the Committee of Council, by James Hemery and John Dumaresq Esquires, Deputies of the States of Jersey. To which is added, in obedience to the same order, what they conceive to be the criminal low of the island. At the Jersey Press, 1789, in the Library. This bound volume contains all the relevant pamphlets and submissions, as well as other material relating to the political career of Jean Dumaresq, viz. A collection of the several petitions, representations, and answers, of the States and Royal Court of Jersey, relative to political differences, comprehending Transactions from the year 1779 to 1788, both included, together with the orders of His Majesty in Council, issued therupon, with a few explanatory notes. Jersey, 1788. A contemporary translated version is available, 'translated by the said States for his Majesty's Approbation.' [NB The 1788 bound copy LG351.09 COL contains Pipon's and Durell's revision of the laws of Jersey.]