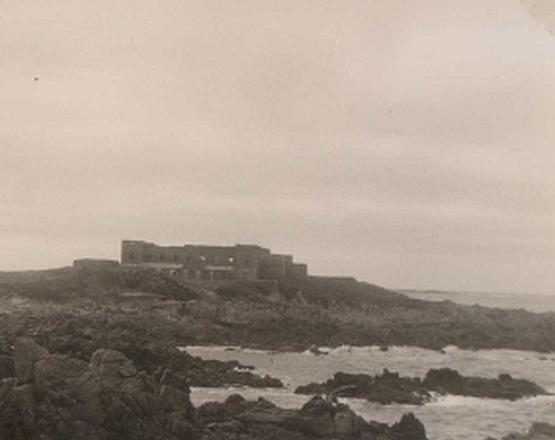 States Meeting. 'Whether they are of the opinion to approve the gifts of the sites of ancient fortification which the War Department is prepared to offer to the States, enumerated in the schedule of the letter from the Commander of the Royal Engineer stationed in this Island, in his letter of November 4 1907, and that on the conditions mentioned in the letters of the Commander of the Royal Engineers dated November 4 1907 and February 22 1908.'

The President said that in 1850, the States, wishing to free themselves from the burden of the uncertain annual cost of many of these fortifications, entered into an arrangement by which it was decided that the War Office should take them over for ever on payment of £9,000.  ... Formal effect was given in this by a deed in which all the properties (60 in  number) were enumerated. Many had since become useless, and others had been disposed of by the War Department, either as a gift or sold. Eventually H E the Lieutenant-Governor, who was always the first to assist the States, placed himself in communication with the War Department and the States Supervisor, with the result that most of these properties were offered back to the States subject to certain conditions. ...

His Excellency the Lieut.-Governor, after giving some explanations concerning the transfers of the properties of the States, and the removal of certain conditions that had been made in connection with the said transfer, etc., almost all of which had been withdrawn, thanked the States for having so liberally provided some of the objects which had been so near his heart since his arrival in the island. The light and fog signal was in his opinion the crown of all this work (hear, hear.)

III.'To authorise the Supervisor to pass contract with the War Office for the said gift.' Adopted.

IV. 'To vote a sum which shall not exceed of £366 stg. for the necessary repairs to the buildings on the said sites, well understood that the above named amount shall be levied by way of loan re-imbursable with interest thereon from the products of the sale of the said sites.' A question was asked as to whether the repairs suggested were urgent. Jurat Brouard replied that those at the Crocq Battery and Fort Richmond were most urgent. The worse these premises were allowed to get the more the value of the property would depreciate. .... Adopted [the sum of £220 substituted]. &c &c.

Fort was once a tea-room

Recently, Fort Richmond was in the news and it was stated that it had enjoyed little history. This is true, no doubt, but a reader tells me that in the early part of the present century the fort was used as a tea room. It was kept by a Mr and Mrs Patterson, who catered for picnics, 'treats,' and visitors to the neighbourhood. It is believed that the place was closed when war broke out in 1914 and that it was never re-opened for refreshments.