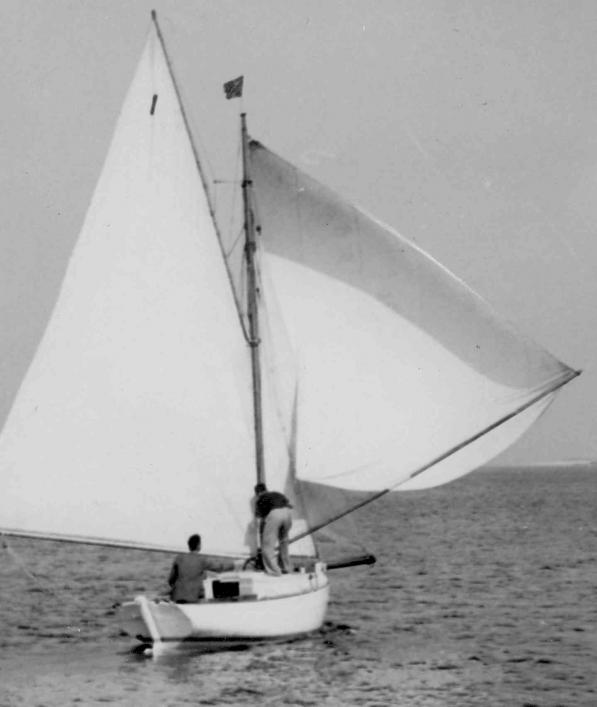 From The Star, Guernsey, Tuesday, July 18, 1944. 'Grand old man of St Peter Port began at 1/- a week. Originator of Organised Amusements.' By a ‘Star’ reporter. The photograph shows Alfred I Le Patourel's yacht, the 'Naughty Girl', and is from the Guernsey Photographic Archive at the Priaulx Library.

Guernsey in the old days was dealt with in a recent article describing the recollections of Mr A I Le Patourel, of Buena Vista, St Martin’s, who is 80 years of age.

Of interest to an even wider circle of island residents if Mr Le Patourel’s own life, particularly his boyhood and youth spent in a Guernsey which is not only gone for good but sounds to many people as though it could never have existed except in the pages of some Victorian novel.

Born while his father was on a voyage at sea, Alfred I Le Patourel came of a St Martin’s family of many years' standing. His life has been bound up with his native parish, and he has served it faithfully and well in all offices up to Constable and upon the Douzaine.

The family home stood at La Grande Rue, but has long since been demolished in order to make way for the wide sweep of the road which turns in to Les Merriennes. Subsequently, the family moved to Redleaf on the Sausmarez Road. From here young Le Patourel attended St Martin’s School and, later, a more advanced educational establishment at Camp Tréhard, St Andrew’s, where some 40 boys were taught by Mr Daniel Naftel, who afterwards became Editor of ‘La Gazette de Guernesey.’

There was neither compulsory attendance nor any minimum school-leaving age in those days, and at 12 and a half years A I Le Patourel started out in the world as an apprentice plasterer in an uncle’s business. Less than three years later he realised that this was not his true vocation, and, without a word to his parents, he bound himself apprentice once again, this time to Messrs Torode and Nicolle, drapers and outfitters, of High Street, for a period of six years.

The conditions of service which he accepted were normal then, but how many of the rising generation would care to engage themselves on the same terms? The salary to start was one shilling per week, with an annual rise of a further weekly shilling, so that at the age of 21 years the industrious apprentice (and he had to be that to avoid the sack) was actually earning 6 shillings weekly. There was no Income Tax in those days.

Wages generally were, of course, on a corresponding scale, a foreman plasterer receiving 16 shillings and the average skilled labourer 12 to 14 shillings weekly. It would be interesting to know what the index figure for the cost of living was then according to the present-day scale.

Young Le Patourel, however, after completing a gruelling six years as a general odd-job man in addition to the other duties of an apprentice, was promoted to be an assistant, first at 14s, and then 16s per week; but ambition still stirred within him. Two years later he made the great decision and started out on his own account in business.

In this venture he was joined by the late Mr George de Carteret, who had been associated with him in his apprentice days, and with whom he was destined to remain in faithful partnership for 52 years.

The new undertaking was looked upon with disfavour by all those except the people who really mattered, and the young adventurers on the sea of business were given a twelvemonth or less in which to founder. But the wiseacres were wrong again. The firm lasted over half a century.

The stock and fittings of a Mr Jamouneau were purchased and the premises at 10 High Street taken over, the opening of the new firm being announced by a sale of surplus stock. Among this, Mr Le Patourel remembers, were vast quantities of white cotton stockings, bought purposely for disposal to the girls working at Keiller’s jam factory, then situated in Park Street.

This had been a steady and regular selling line for the previous proprietor, but almost immediately after de Carteret and Le Patourel opened their business Keiller’s shut down theirs and left the island. But the stockings were bought by local women, who, presumably, dyed them black, the fashionable colour in those days.

During the years that the two young men were steadily and surely building up their fortunes, Mr Le Patourel cut out many thousands of coats and waistcoats and quite double the number of pairs of trousers, yet he had never received a lesson in the art! Six tailors were constantly employed, besides the sales staff.

Although they found sufficient work to keep them working hard for long hours, the two young men had other interests in life and always kept their eyes open for a bargain. In this way, they bought and sold many well-known properties, such as Rosenheim, St Andrew’s, and other large estates. Perhaps their biggest deal was the demolition of old Smith Street and the planning and erection of the present fine sweep of buildings on the new site, extending from the Post Office to Lloyds Bank corner.

Despite his business and parochial activities, Mr Le Patourel found time to devote to the organisation of amusements for the remainder of the public. For nearly 30 years he was the energetic and popular honorary secretary of the Summer Evening Bands Committee, which subsequently became the Guernsey Entertainments Committee of the Town Douzaine.

During that time he was responsible for organising the local celebrations of such functions as the Queen’s Jubilee; Diamond Jubilee; Coronations of King Edward VII and King George Vl; the Victor Hugo fêtes; the reception of W Priaulx, winner of the Queen’s Prize at Bisley, and many similar events.

Lastly, though, and one wonders how time could have possibly been found for any further interests, both Mr Le Patourel and his partner were enthusiastic yachtsmen, though the former preferred racing and the latter the more placid sport of fishing.

Their trim little sailing yacht ‘Naughty Girl’ was well known throughout the Channel Islands during the 25 years they owned her and with their faithful boatman, Jimmy Falla, won many a thrilling race and also brought home numerous fine catches of mackerel and other fish. Her record season under these owners brought them a cup, three first and three second prizes, at a time when honours were not so easy to obtain as they afterwards became.

Now, as evening draws near, Mr Le Patourel still works about in the garden which has been the hobby of his years of retirement and is satisfied to look back upon a life well spent and profitably filled.

‘Work hard and play hard’ is still his motto, as well as his counsel to those just starting out in life. It is the advice of one who knows.