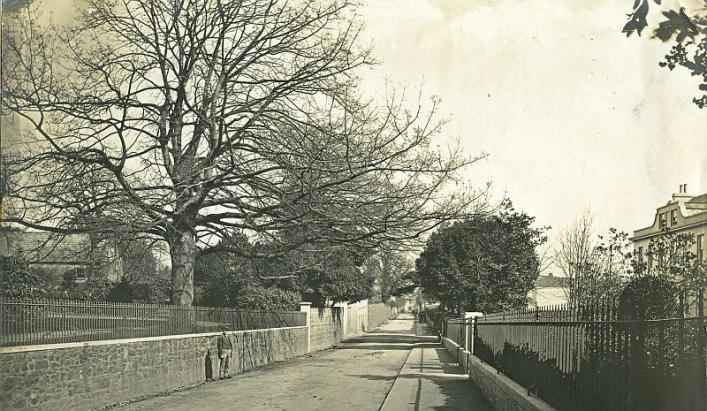 From Cochrane's Guide to the Island of Guernsey, published by the author in Market-Street, Guernsey, in 1826.

The second route commences by proceeding along the Grange-Road, which from its situation, and the numerous houses belonging to the gentry that adorn it, may be considered the best part in the vicinity of the town. As an evening-walk from St Peter-Port, this road is much frequented, and of course a great thoroughfare, not only to the country but to the various family mansions about the neighbourhood of Mount-Durand, &c. We cannot possibly mention one house out of twenty; but the few that we shall notice up the road, are particularly striking.

The first is on the left opposite the college ground, a large and modern mansion, the residence of John Collings, esq. [Bonamy House]; and a little further on the left is a delightful little house with a green veranda, supported by slight pillars, the property of Miss De Lancey.1 The adjoining house is the enviable residence of Sampson Pearse, esq. [Butterfield House]; Mr. P. is the architect of his own fortune, and retires from London to this 'terrestrial paradise,' where he has spent a considerable sum in erecting, not only a convenient mansion, but finished in almost a superfluous manner. Added to this, Mr. P. has the best collection of flowers, plants, and fruits in the island; horticulture appears to be his favourite study, and, if by chance a flower or plant does not succeed, there is another put in its place immediately. The spectator is astonished when entering the garden, at the various hues and colours, and as many fine scents and delightful objects of nature and art; the hot-houses surpass any thing that we have ever seen for richness. Mr. P. has also a few paintings of some value; and the furniture, hangings, and plate-glass of his mansion, are all of the most extravagant description.

The next remarkable dwelling is called 'Paradise',2 the property of Mrs Brock, widow of the late Matthew Brock, magistrate of the royal court; there is a neat green plat before the door, surrounded by shrubbery; this place is admired by many in preference to any other, from its convenient distance from the road, and its cool sequestered appearance.

A little higher on the left, about one hundred yards from the road, is the seat of John Savery Brock, esq.; it is remarkable for a neat walk up the middle of a flower-garden to the house, which has glass folding doors, and a balcony in front of the drawing-room. Mr. Brock is brother to the late general sir Isaac Brock, who fell in Canada, and to Daniel de Lisle Brock, esq., the present bailiff of Guernsey, a name deservedly held in the highest estimation in the island.

The next large house is facing the road, the residence of — Walters, esq., M.D.,3 where we incline a little to the right, for the Gravée or barrack-office, which was formerly the quarters of about fifty horse-soldiers; the house which is now the residence of William Corben, esq., barrack-master, was formerly an hospital.

A little further on the right is Roquettes, the seat of the late N. Maingy, Esq., from which we have a fine view of the Câtel church, and the adjacent country that, for beauty and cultivation, can hardly be surpassed.

1 Unlike much of the Grange, this beautiful house is still a private dwelling with a fine garden. See Guernsey's own Pevsner, Brett, C. E. B., Buildings in the Town and Parish of St Peter Port, 1975, Belfast, Adelphi Printers, for the National Trust of Guernsey, for the Delancey family's first Guernsey house opposite, known as Delancey House: 'A five-bay three-story rendered house with a fine Ionic porch, free-standing columns and responding pilasters .... railings and garden swept away on its conversion to offices.' (This has reverted to private ownership and is easily recognisable by its lion cornice.)

2 On the corner of the Grange and Doyle Road. It was built by Henry Brock in 1810. See Some Brock Family miniatures. Brett, 'A large three-bay two-storey stucco house with an excellent Regency iron balcony carried on pairs of Doric columns, triple windows in each bay on the ground floor; set back in seclusion in a large garden with magnificent trees.' Andros, in his reminiscences, refers to 'that wonderful oak which overspreads the Grange Road. Why it is the greatest success in arboriculture in the island, and if anything happened to that tree no-one would recognise the Grange ...' This oak was planted in the garden of Paradis by Henry Brock in 1810. It was still safely standing in the early 1900s and we think it remains, though a shadow of its former self.

3 This was Robert Walters, husband of Susanna Maingay, father of Nicholas, who married Anne Priaulx of the Grange. 'Died on Tuesday morning, after a lingering illness, most deeply regretted, aged 81, ROBERT WALTERS, esq., M.D., Inspector of Army Hospitals, fifty-four years a resident in this island. His long professional career was distinguished by ability, disinterestedness, and benevolence.' [From the Star of 27 December, 1833.]