Here's what the Guernsey Water Polo Association got up to in what they termed their 'crazy' Water Gymkhana of August 1938, from the Star.

In glorious weather the Guernsey Water Polo Association held a water Gymkhana at the New Jetty yesterday afternoon. Crowds flocked to all points to see the fun, and they were well rewarded, for it was a first-class programme. A novel feature was the running commentary by Mr R. Mallett, who was on great form and kept the thousands of people in touch with all events. The loudspeakers were supplied by Messrs K Munro & Sons, Pollet. Undoubtedly the part that everyone enjoyed most was the film producer’s boat when it caught fire, when it was intended that the camera should catch fire and be thrown overboard. Unfortunately it fell into the boat, much to the delight of the thousands of spectators, who called and shouted in delight. After a desperate 'fight,' the 'fire-fighters' had matters under control.

The first event was a display of fancy floating by 16 young girls, who were trained by Miss Elise Robilliard. Among the many items they performed were: Double star, Catherine wheels, revolving, sculling, submarines, turtle sunbathing, and many others. All were most gracefully performed, and were (it is believed) quite new to Guernsey.

The next item was the only serious event of the afternoon, the Water Polo Cup Final between the old Intermedians (holders), and Guernsey Swimming Club. Mr. George Osborne, Sen., whistled out the teams, Mr. George Osborne, Jun., was timekeeper, and Messrs Waterman and Green were goal judges. The teams were: O.I.s: H. Oliver, J. Davison, G. Naftel, G. Guilbert, H. Nicolle, R. Naftel, R. Nicolle. G.S.C.: L. Hunt, R. Bichard, C. Lacey, R. Wheeler, E. J. Crews, B. Rabey, E. Pattimore.The O.I.s were without G. Symons, their stalwart back, and they included no fewer than four youngsters in their team. [There follows a description of the “very fine and exciting game”, which was won 3 to 1 by the GSC.]

Fancy and comic diving came next, with a flight dive by 15 young ladies. Miss Marion Gaved was welcomed back after an absence of two years, with a beautiful swallow dive. Numerous other dives were performed by young ladies and men, comic costumes being the fashion for this display.

The most spectacular dives seen in Guernsey for many years were by Mr Manning from the top of the crane. The distance was about 45ft. He gave a flying reverse dive and a reverse somersault full leg out. These were really very fine dives and showed the great skill needed for such daring dives. When the announcer asked for volunteers to repeat Mr. Manning’s dives, I believe no rush was made. Then came Mr Palmer’s most daring dive through a hoop of fire.1 This dive needed great courage, and it was well carried out. Mr. Palmer received great applause for this dive, which he certainly deserved.

'Gertie' [Frederick] Toms climbed to the top of the crane in humorous fashion, complete with 'gamp' [a large umbrella], and performed the ever-popular 'Charlies' Aunt' amid great roars from the crowd. This concluded a great show of diving, both serious and comic. 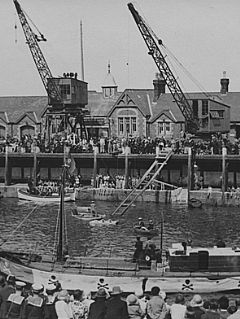 The egg and spoon race attracted seven men and caused much amusement, the winners being: 1) Davidson, J., 2) Brassel, M., 3) Dames, D. The next event was called “Hop Across the River”. Six girls were alongside of the polo pitch and had a balloon tied on their arm. One was in the middle, Miss G. Robilliard, without balloons, and she had to try and burst the balloons. This game called for speed and was enjoyed by all.

Before the next item was 'staged,' a very pleasing little ceremony was carried out when Mr Don Bradman was to be presented with the 'ashes.' Don, who was complete with leg pads and bat, was taken out to the raft by Miss 'Beautiful' Palmer. On arrival at the raft the referee of the boxing match 'welcomed' him aboard and presented him with a bucket of ashes over his head.

The men’s 'dressing-up' race was very good. Fourteen entered, and had to get into a shirt, swim to another point, get into a pair of trousers, and then go and get a hat. These feats caused roars of laughter on account of there being more competitors than costumes. The winners were: 1. B. Rabey: 2. D. Dames: 3. J. Loaring.

At this point Messrs Denning and Palmer gave a very fine double dive.

The 'Guernsey Gliding Club' held its Delayed Parachute Jump Championship of Guernsey. It was only ladies who entered, in full attire. They were Miss Gertie Toms, Miss Pansie Palmer, Miss Greta Garbo. The result is still delayed, and will be announced at a later date. The ladies’ float race drew eight entries, and the course was set around the polo gear and raft. Miss Wakeford took the lead, which she maintained throughout the race. Miss Quickenden was second and Miss Hammond third. As the announcer said 'They had the proper boat race idea.' This event was very exciting.

The men’s float race was to be over the same course as the ladies’, but they lost their way and it is believed they went to meet the mailboat. At the time of going to press the following there had arrived: 1. Dames; 2. Davidson; 3. H. Nicolle. “The Star” had no chance of interviewing the first arrivals as to their experiences. The tug-of-war between Blondes and Brunettes turned out a draw.

A SPOT OF BOTHER.

The last event of a most enjoyable afternoon was entitled “Saved from a Watery Grave”. This was a scene from a film. Mr And Mrs Greenski and Freddiski had a spot of bother. Bill Greenski and Freddiski did not see eye to eye over a “cocktail party” or over Mrs Greenski. Meanwhile the producer of the film, together with the cameraman, who were in another boat, had a spot of bother, for the machine caught fire, an unfortunate affair, after some splendid close-ups of Mrs Greenski and Freddiski tickling each other. The machine, which was intended to catch fire, went a little bit further and caught the boat on fire. This part was not intended, but the crowds of people just laughed and cheered, and thought it was well carried out. Fortunately before much damage was done the fire was put out, and this ended Freddiski “saving his lover” from a watery grave. The afternoon finished with a flour fight between a crowd of chaps on floats.

After a welcome cup of tea at the White Rock Cafe, Mrs. R. Mallet presented the Williams Cup and medals to Mr. B. Rabey, polo captain of the winning team.

NOTE: The St Sampson and Vale Regatta for 1938 was held on the 11th August in St Sampson's harbour. It consisted of mainly boat races of various kinds, including yachts, dinghys, gigs, and sculling, but did feature the very entertaining greasy pole for seniors and juniors over the harbour, and a road race. This regatta is no longer held, but for a present-day equivalent to this madness, attend the Rocquaine Regatta. This very popular event, very much in this tradition, was revived in 1971 after a lapse of 43 years, and is still going strong. See an article by Dorothy Davies, "La Régate dé Rocquoïne", in The Review of the Guernsey Society, Winter 1971. She says: "I sincerely hope this event will once again be held annually as of old, because this could prove to be as big a draw to visitors, as well as residents, in my opinion, as the event at Cowes is to the Isle of Wight - possibly more so, because of its slightly foreign and highly original concepts." What can she have meant?

For the revival of the Town Regatta, see the Guernsey Press of January 5th, 1952.

1 There is a photograph of the fire dive in the Guernsey Weekly Press for that week; this was the first time such a dive had been performed in the island. The flaming hoop, covered with paper and doused in petrol, was held out from the board by two other swimmers on crossed poles. The Weekly Press gives more details about Manning's dives, which were actually performed when the tide was not at its highest, and the full names of many of the competitors. Fred Toms jumped from the crane dressed as Aunt Sally. See Tim Bowditch's film about the Bathing Pools, Firedive.

² The life of William 'Monty' Manning is described in the Guernsey Press of 28 August 2008. The dives he performed in this 1938 gala are still remembered, as according to the Guernsey Press he had never made them from such a height before. A quarter of a century later, he died after cracking his head on a diving board in the UK.