From The Guernsey Breed, by Charles Hill, published by Fred Kimball in Iowa, 1917; and churning Guernsey butter—not cleanly but expeditiously—in the 19th century, from Bellamy's 1843 Pictorial Directory. The upright churn shown below is from this volume. 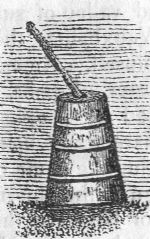 Guernsey butter, without exaggeration, is superior to all other.

From Sarnia, or the Holy Land, a new guide to the privileged island of Guernsey, published in Jersey, 1840, p. 78.

The cows are so highly celebrated, and the milk which they yield is so peculiarly rich, that it is not necessary to let it stand to produce cream, the whole being at once fit for the process of churning.

From A Topographical Dictionary of England, 1831:

The calves are taken from the cows when they are from a few hours to three or four days old, and are fed the new milk for two or three weeks. The fresh cows are nearly always milked three times a day and the calves are then fed three times a day. A few farmers have cream separators and thus have warm skimmed-milk to feed their calves. But most of them still follow the method that has evidently been in vogue for generations, of souring and churning the whole-milk. Then the calves are fed the butter-milk, which naturally is thinner than butter-milk from churned cream.

The calves are early tethered out-of-doors, and it is to this out-of-door life that we must seemingly attribute the health and vigour of the island cattle.

The butter is nearly all made into small, round prints and sold to private customers in St Peter Port. It is also commonly on display in the public market, where it is usually offered for sale in prints of from one to one and one-half pounds, placed in the centre of a large cabbage leaf. It was the butter thus displayed in the markets that first attracted the attention of visitors from England and America to the island's breed of cows. For some reason a marked difference may be noticed in the colour of the butter from different herds in the island. Some farmers' wives always bring very yellow-looking butter to market, while others offer a much paler product. Many who do not realise how dense the population of the island is often ask where the islanders market their butter, thinking that a large surplus must be shipped away. As a matter of fact, not nearly enough is produced for home consumption, for one may see displayed in the market windows butter from Jersey, France, England, and Denmark, and not butter only but large quantities of margarine as well. The prevailing price of Guernsey butter is 50c per pound, while the imported butter sells for 5 or 10 c less, the price of the latter fluctuating with the English market. Milk is sold at retail for 8c per quart.

It is instructive to go through the market building, where 30 or 40 stalls are used for the display and sale of meat, and observe the marked difference in the colour of the fat of the local beef as compared with the beef imported from America and the Argentine.

A strange fact came to my notice at my last visit, that when butchers on Jersey slaughter an animal with particularly yellow fat they send the meat over to be sold in Guernsey. This bears out the oft-repeated assertion that often an individual Jersey will yield butter as yellow as that of any Guernsey. But this is not universal for the Jersey breed, whereas the Guernsey butter is always yellow, and the Guernsey people have learned to prefer beef with yellow fat. They know that yellow fat is not an indication of an old animal, which is a popular misconception in our country. Many steers are fattened and butchered for the Christmas trade.

As the stranger may not have hitherto had a proper opportunity of observing the manner of Guernsey churning, it may not be unacceptable to give him an idea. In England, either the barrel churn or the patent vertical ones are generally used, whereas here the old fashioned upright one has maintained its ground through all time and change, which if not deemed a cleanly way is certainly an expeditious one. The milk, which is churned with the cream, is commonly put in the churn overnight, and that generally on the third day. When it is curdled it is churned, the acidity of the milk quickening the butter, which is not to be excelled in any part of the world.

From the Guernsey and Jersey Magazine, 'Sketches of Guernsey' No. 2, 1836:

Guernsey butter is as yellow as a guinea, and of most excellent flavour. It is indeed finer than any that can be procured in England. The milk is churned with the cream; the buttermilk is not an unpalatable beverage, and is in great use among the country folk as an article of food; but cheese is never made. The supposed general average that a cow will yield throughout the year is one pound of butter, or eight quarts of milk during the twenty-four hours. It is observed, that the fattest cows are not the best milchers, and the best milchers will not always produce the largest quantity of butter. In summer, many instances have occurred in which the cows have yielded fifteen pounds of butter in a week.

NEW METHOD OF MAKING BUTTER. Mr. E. T. Guerin has communicated to us that having learnt from Mr. W. P. Dobrée, of Hamburgh, that there has been discovered in Sweden a new method of making butter, he has made a trial of it with entire success. The method is as follows: put the cream, either sweet or sour, into into a bag of sufficient fineness to prevent it passing through, and then bury the bag four feet in the earth, carefully covering it up. In twenty-four or twenty-five hours, on taking up the cream it is found to be converted into excellent butter.- Gazette de Guernesey, April 1852.