Guernsey - The Pick of the Bunch: a tourist brochure from 1934 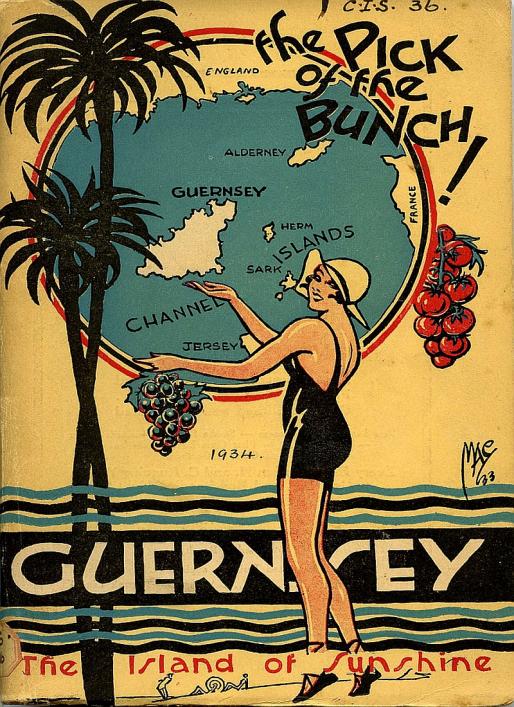 The Priaulx Library has a great deal of ephemera amongst its collection, including tourist brochures. This is a particularly attractive example, from 1934, produced by the 'States' of Guernsey Advertising Committee' and printed by the Guernsey Press Co., Ltd. This 168-page brochure seems to have been written as a guide to Guernsey for both the potential holidaymaker and prospective resident.

Guernsey was famous for growing and exporting both tomatoes and grapes, especially the 'Cannon Hall' grape variety, a favourite of royalty.¹ The lovely cover illustration is by a very well-known American illustrator, artist, and jewellery-maker, McLelland Barclay, known sometimes as 'Mac.' More examples of his work can be seen online. The brochure has a foreword by the author Compton Mackenzie, who was at that period resident in Jethou, and begins 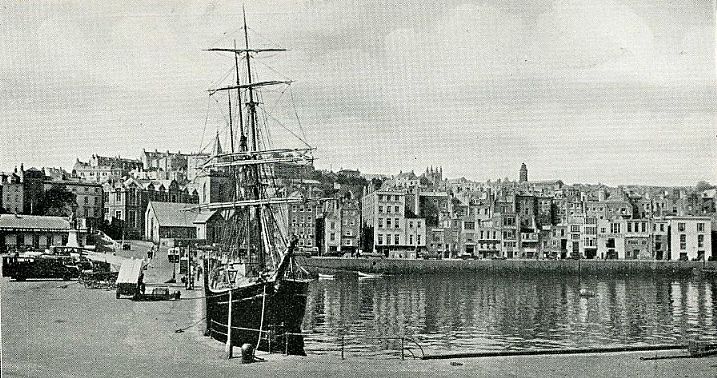 If there be one quality which Guernsey can safely claim, it is a complete dissimilarity from any other place on earth or in the sea. It is not even like Jersey, still less like Sark or Alderney.... The real lover of the sea can gratify his love of it more easily by a holiday in Guernsey than almost anywhere.

He is quite correct, of course. He goes on to extol the virtues of the smaller islands, especially Herm, and ends by saying:

Combining as it does something of Cornwall, something of Dorset, something of Normandy, and something of Brittany with a great deal that is quite unmistakably the Channel Islands and nowhere else, a holiday in Guernsey offers a rich experience of travel much more comfortably than it could possibly be obtained by an extended tour of England and France. I know from many correspondents what a deep impression a visit to Guernsey leaves upon them, and the quiet unusual air of happiness and excitement which always prevails among the summer crowd of visitors is a proof of their appreciation. I have never met anybody who asked me what he could find to do in Guernsey; but I have met plenty who have asked me how they were going to do all that there was to do.

The Advertising Committee included a useful map of St Peter Port and accompanied it by a transcript of the 1394 Charter of Richard II, in which the islanders' rights 'to be free and quit from all tolls, duties and customs of whatsoever kind in all our Cities, market towns and ports within our Kingdom of England' are made quite clear. 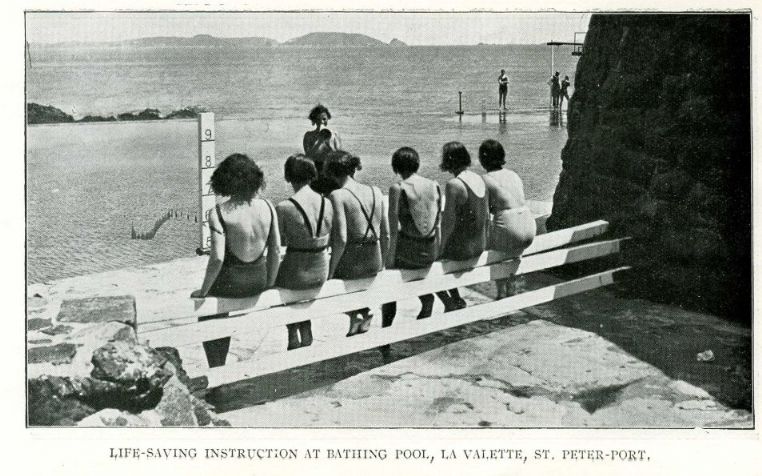 A great deal of information is provided to the potential visitor/resident; the amount of sunshine, ticket cost and timetables for every conceivable manner of travel—except by air, which, although it was possible for the favoured few, is not mentioned,² motor tax, freight charges for cars, dog importation, and bicycles:

DRIVING LICENSES: A Guernsey Driving License (Fee 1/-) is issued to a visitor on presentation at the States Office of a recommendation from the Guernsey Police. To obtain this recommendation a driving test must be passed, but no fee for such test is made if the visitor produces his current driving license to the Police, otherwise a test fee of 2s 6d. is charged.

CYCLES: On arrival, visitors must register their cycles at the States Office, North Esplanade, where a number is issued. This number must be attached to the cycle. A deposit of 2s. 6d. is required, but this deposit is refunded in full if the number is returned within a period of two months. 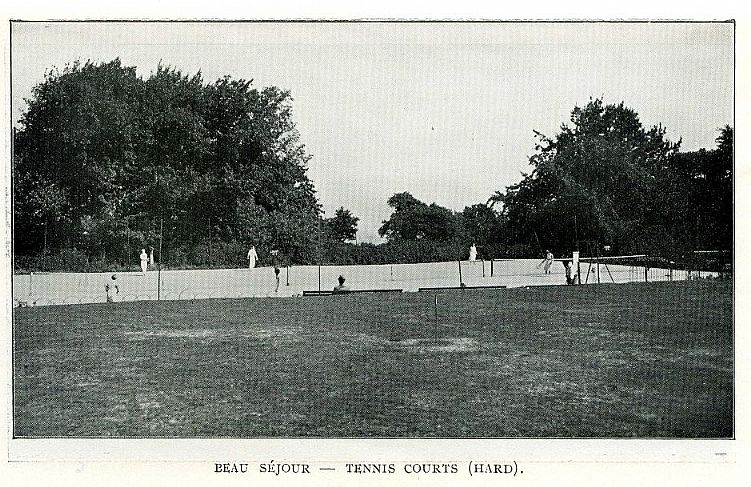 There are descriptions of the public recreation grounds at Beau Sejour—practice nets for cricket, putting greens (18 holes, 3d. per round), seven hard courts for tennis (2s. 6d. hour for four players, 1s. 6d. for two) and a Bowling Green, and mentions of sports grounds at Delancey Park and Fort George. The Golf Links of the Royal Guernsey Golf Club at L'Ancresse are lauded, with fees and subscriptions. Entertainments include evening concerts at Candie every day of the working week, given by English Touring Companies who are engaged by the Guernsey Entertainments Committee, with a change of concert party each week; every Sunday evening a band or orchestral concert was held; several cinemas ('There are two good cinemas in the town, one situated in St Julian's Avenue, the other in New Street. There is also a good cinema at St. Sampson's'); and

Sailing regattas, swimming galas, water polo matches and motor cycle races are held from time to time. There are also two or three small horse race-meetings every year, and a Battle of Flowers held in September. 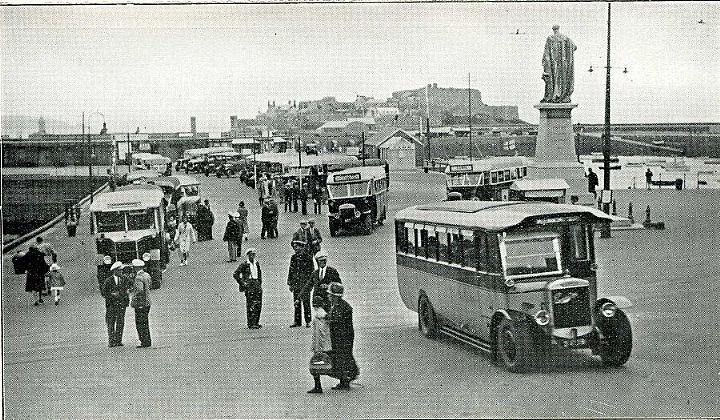 The guide gives the cost of telephone calls to various cities in Britain 'rates being lower than any enjoyed by telephone users in the United Kingdom.' It explains about local taxes, and rates, education system, megalithic remains, bus services, based at the Albert Pier, places of interest in St Peter Port, places of interest in the Country, what to do on a wet day, Herm, Alderney, and Jethou, and a detailed description of a day excursion to Sark. Then follows General Information on Post Offices and Banks; Social Clubs—The Grange Club; the United Club; the Sporting Club; the Alliance Club; the United Comrades Club; the Imperial Club; the Ex-Service Men's Club; and the Sarnian Club. 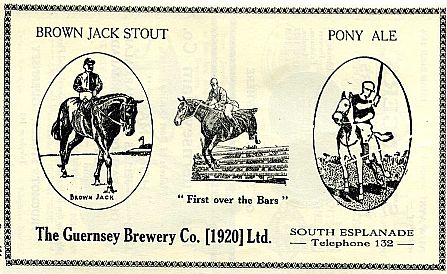 The most interesting aspect of this guide, however, is its advertising. Lists of hotels and boarding-houses are accompanied by a plethora of advertisements for them and many other aspects of island life, and the guide is illustrated with photographs. There are three full-page advertisements for plots on new large estates: the De Putron Estate at Fermain, apply Jesty & Baker; Monument Gardens residential Estate, apply Mr R. Dunning, The Lodge, Monument Gardens; and 'Guernsey's most beautiful private Estate,' 'Ville-au-Roi,' apply J. W. Huelin, Ltd., Jersey, the construction boom reflecting the optimistic view the island then had of itself.

¹ These grapes are green rather than red, however. For a history of grape production in Guernsey, see Coysh, V., 'The Grape Industry in Guernsey', Quarterly Review of the Guernsey Society, VI (2), Summer 1950, pp. 7 ff.

² From The Star, 7 May 1935: Guernsey-London Air Service Begins. 'There have, of course, been flying-boat and seaplane services, but this was the first land-plane service.' It was operated by Cobham Air Routes Ltd., run by Sir Alan Cobham, an island resident at the time, from L'Erée aerodrome, and arrived from Croydon via Bournemouth, where there was a change of aeroplane, and Portsmouth. It carried six passengers, including Sir Alan himself, but could seat eight. In April 1934 the States began to consider building an airport; it was opened on May 5th, 1939, at La Villiaze. See: States of Guernsey Airport, Official Opening May 5th, 1939, programme; Priaulx Library: Aviation: Airport & Early Flying Days Cuttings File, passim.

3 The Library has a sales brochure for this development in its collection.