The Guernsey workman, by Charles Hugo

The decoration of the salle à manger, or dining room, at Hauteville-House, Victor Hugo's residence in Guernsey, was finished in May 1857. Charles Hugo wrote of it: 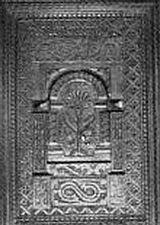 'It is incredible to think that Victor Hugo got this prodigious work of interior decoration, of sculpture, of stonework, out of the primitive carpentry skills of good ole’ Guernsey boys.' '

He adds, with an amusing exaggeration which our Guernsey friends are the first to smile at,

'The fact is that the Guernsey workman is not what one generally understands by 'workman'. The Guernsey workman is a deep calculator, and is only concerned with working out how to do the least possible work in the longest possible time. He is silent, morose, immobile and somnolent. He climbs the stairs slowly, and comes down them even slower; he comes to a halt with a meaningful step. Even when he is actually getting down to it, he is never in anything remotely resembling a hurry. He strokes the wood under the pretext of planing it, and you would think that he was scared of creasing the rare and precious shavings which, every quarter of an hour or so, escape his sleepy tool. Comparing a Parisian workman and a Guernsey one is like comparing a lightning bolt and a lobster. Ten workmen labouring twelve hours a day, working under a man called Mauger, took a whole year to complete our salle à manger—which we now call our salle à Mauger.' [Dinah Bott, from the French.]

From Jean Delalande's Victor Hugo à Hauteville House, 1947, pp. 57-8, in the Library collection. The illustration above is also taken from this volume, and shows a panel from the dining room door. The photograph is by Norman Grut. The room was first used to entertain guests on 14 May 1857. It was in this room in the winter and in the garden in the summer that, from 1862, Hugo fed and watered his chers enfants pauvres. Modern photographs of the room and further information can be found in the online guide to Hauteville House, Rez de chausée.