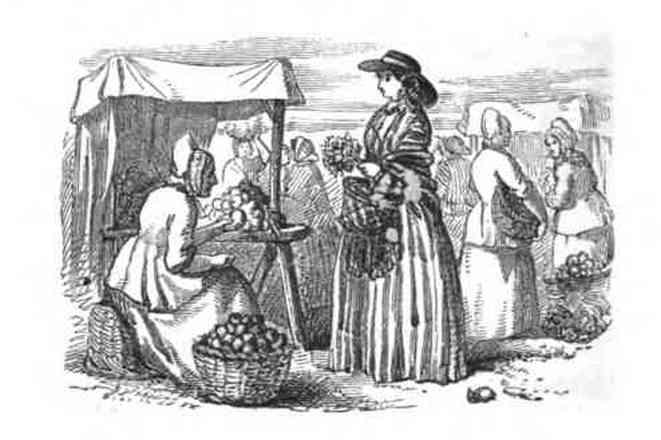 A contributor to the Elizabeth College Magazine, No 3, dated July 1842, describes High Street in 1800, and a comparison of the conditions then and to-day is most interesting. In those days, says the writer, the houses were so much out of alignment that one was unable from the top of the street to see the bottom. The street, too, was so narrow in some places that if one cart met another, one of them had to be backed into a doorway to allow the other to pass. There was so little traffic, however, that grass grew between the paving stones, and crabs and fish were sold in the street, from boxes and bingues (wicker baskets). Opposite Cow Lane beef was sold, the ox or cow having been slaughtered almost immediately before its flesh was exposed for sale in the immediate vicinity of the lane! On summer evenings the people who resided in High Street (at that time members of the best families of the island), brought out benches from within, and sitting outside took their tea and retailed the gossip of the day, many ladies also passing the time in knitting.

'Early to rest' was the motto of these old days, for as the evening advanced the groups dispersed, the people retiring into their own dwellings, even the young men who had spent a few hours with theoir sweethearts hastening home before the evening was too far advanced. 'Such was the quiet scene which once was witnessed in High Street—in this manner did a man's life tranquilly pass on, and he was happy only when those around him were also happy.' What would the people of 1800 say if they could see High Street as it appears on a Saturday or Sunday evening in 1932!

Vegetables also were sold in High Street in 1800, the boxes and baskets of the sellers lining the thoroughfare. By 1840 these public sales in the streets were prohibited, the vegetable sellers being moved to Market Square.

They came to market on horseback between two piles of their produce. All the women were clad in 'la bonne vieille mode,' each wearing the now almost defunct Guernsey headwear, the scoop, 'which became them more than a coronet of pearls on the head of a duchess.' 'Les dames du marchi' about 50 years ago were moved, in some cases after many protests, from the open air into the newly-constructed Vegetable market, on the site of the present Fish Market. The animated scenes on Wednesdays and Saturdays, when the sellers of vegetables were seated at their makeshift stalls, usually under the shelter of a huge umbrella, will still be remembered by many residents.