How the old mill lost its vanes 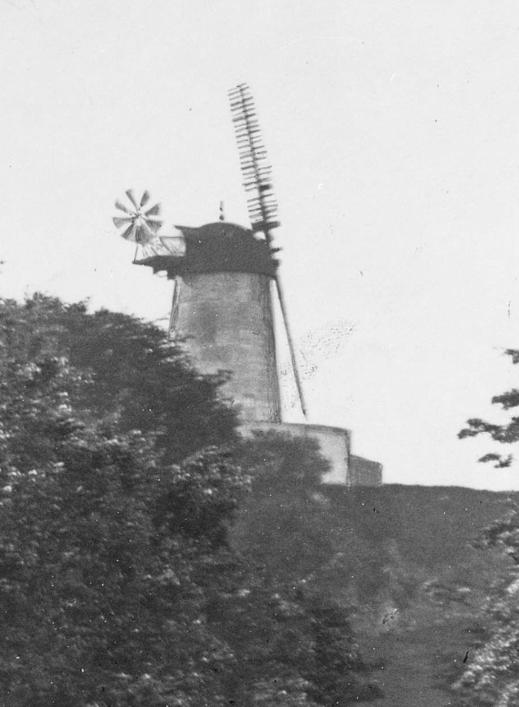 Ozanne's Mill, Le Hêchet. From The Star, June 1907. The detail is from a photograph of the mill in the Library collection, which was probably taken in 1905 by the late G W S Anderson of 2 Escallonia, Mount Durand (mentioned by Sheppard, op. cit. below, p. 408).

After weathering many a hard gale, and living through countless wild nights of bitter weather during its long life of 53 years, one of the two remaining vanes, till now working the old Hechet windmill near the Elms, St Martin's, collapsed before and nothing stronger than a moderate WNW breeze at a quarter past two last Friday, October 25th.

The accident was not altogether unexpected, for the good old Dantzic beam was known to be showing signs of decay, and had been strengthened sometime back in order to enable it to better withstand the great force of wind at times blowing against it.

Fortunately no-one was injured by the fall, but the building was damaged.

The final snap came as the vane, 38 ft in length, was swinging upwards, and occurred a little before it reached the upright (or centre position), from where it crashed through the roof of the unused part of the store surrounding the mill, and broke in two. The tower itself was not damaged, and in falling the great beam just managed to avoid an oil engine used for crushing oats, and which the Messrs Ozanne, proprietors, find exceedingly useful when there is not sufficient wind to move the vanes.

In the spring of next year it is the intention of Messrs Ozanne, we believe, to put up a set of four vanes; in the meantime work will be carried on as usual by means of the engine.

The old mill, always a picturesque bit in the landscape from whichever side viewed, was built in 1825, eighty-two years ago, by Mr James Ozanne, the grandfather of the present proprietors. There seems to have been some opposition to its erection on the part of certain people, but Mr Ozanne put his case in the hands of the Privy Council and won the day.

The Mercure, a local newspaper of that time, in its issue of October 14, 1824, stated that an Order in COuncil, dated August 14, 1824, had been presented to the Royal Court on October 9 by Mr James Ozanne junior, authorising him to build a windmill.

A hundred years ago, owners of mills were obliged to grind for the public and to keep the mills in good working order,  but as a result of Mr Ozanne's petition, the Royal Court, at he suggestion of the Privy Council, framed a new Ordonnance on the subject.

The Ordonnance relieved millers of this obligation, giving them liberty to grind or not as they felt inclined; also to pull down the mill if they wished to do so, or put it to any other use they thought fit.

On one of the old beams in one of the galleries of the mill are several dates referring to the erection of the tower, but time has almost obliterated them, so much so that they are now difficult to make out.

During a thunderstorm in 1893 the mill was struck by lighning, but not seriously damaged. The electric fluid entered the building, and left traces of its passsage behind, which are still to be seen. Two years later, we believe in 1895, the mill sustaining the loss of one of its vanes, the proprietors decided to remove the opposite one.

This was done, and for some twelve years we have all been familiar with the old mill going round with two sails instead of the usual four.

And now the ancient Dantzic spar has gone by the board after a long and useful life, during which it has seen the rise and fall of several beams far less strong and hearty than itself.

For instance, the vane which fell in 1895 had only been working for about nine years when its life was suddenly ended. We are very glad to hear, however, that the Messrs Ozanne hope to erect a new set of vanes in the near future.

The old mill is at present robbed of its picturesqueness, and we feel sure that many besides ourselves will mourn the downfall of the ancient Dantzic, while at the same time looking forward to the day when the rush of the wind through the sails will be heard once more as the vanes swing round in the teeth of a rising gale. Or as seen idle on a summer's evening, pause to admire the pleasing bit it makes, whether caught sight of from near or far, in the restful quiet of the deepening twilight.

See the Guernsey Press, 13  September 1966, for the redevelpoment of the mill, with photographs, and J C Sheppard's article about the mill in Guernsey Mills: a symposium, Guernsey: Soc. Guern., 1962 (reprint).