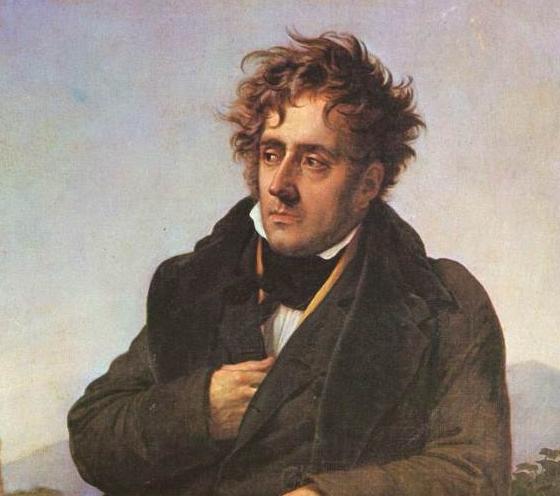 The Romantic author and politician François-René de Chateaubriand, wounded and weakened by dysentery, became extremely ill on a crossing to Jersey, on the way to his native Brittany to join royalist rebels. Chateaubriand managed to make it to Jersey, where he was delivered into the care of his uncle, the Comte de Bédée, but remained very ill for several weeks. He eventually went into exile in London. This is an extract from his memoirs, Les Mémoires d'outre-tombe, Book 10, Chapter III. The 1808 portrait by Girodet-Trioson is in the Museum of Saint-Malo.

I was completely worn out; there was no more left in me. I could no longer speak: the movements of the waves in the huge swell finished me off. I just about managed to swallow a few drops of water and lemon, and when the bad weather forced us to put in at Guernsey, they thought I was going to die. A refugee priest read me the last rites. The Captain did not want me to die on board his ship, so he told me to get off on to the quay. They sat me in the sun, with my back against a wall, facing the open sea, opposite the island of Alderney, where, eight months earlier, I had glimpsed death in another form.¹

I was, it would seem, destined to excite compassion. The wife of an English pilot walked past. She was affected at the sight of me, and called her husband who, with the help of a couple of sailors, carried me to a fisherman’s house, me, who loves the waves so much, and put me in to a good bed in clean white sheets. The young lady mariner took every possible care of this stranger; I owe her my life. The next day, I returned to the ship. My lady host nearly cried upon being separated from her patient; women have a God-given instinct for suffering. My lovely blonde protectress, who looked like one of those old English prints, held my swollen and burning hands in her own, which were cool and slender. I was ashamed to be anywhere near her, in so unpleasant a state was I, so delightful was she.

¹ The previous winter, Chateaubriand had come very close to being shipwrecked off Alderney. For Chateaubriand and Jersey, see Stevens, P., 'Les Cousins Chateaubriand', Annual Bulletin of the Société Jersiaise, 22 (I), 1977, pp. 61 ff.