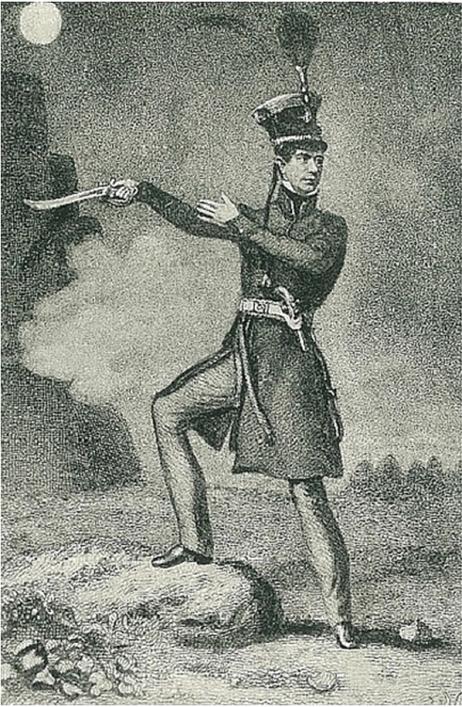 WE had received orders to hold ourselves in readiness to embark—as I then imagined, for foreign parts,—and the idea made my heart bound for joy. In a few days we embarked on board a small sloop, at about four o'clock in the afternoon, and in an hour after got under weigh. When the sun had retired to his western chamber, the sky looked gloomy and indicated wind; and, in another hour, there arose so terrific a gale, that we were obliged to put the tarpaulins over the hatches, to protect us against the large seas which broke over us. The scene was enough to frighten a person of greater courage than I possessed. There were soldiers crying—women screaming—children squalling—sailors swearing— the storm all the while continuing to increase, until at length it blew a perfect hurricane; the rain came down in torrents, and the vivid lightning's flash exhibited the fear depicted on every countenance. At this juncture a poor frightened soldier mustered up courage enough to ask the captain or master of the sloop, if there was any danger. At this question every ear was open, and the son of Neptune gruffly replied,—'Danger, shipmate? If the storm continues another hour, I would not give a rope-yarn for all your lives. [...]. 'Steady,' said our naval commander, and on we went; but by no means steadily, for I never saw a little bark more unsteady, though she really seemed to dive through the water like a duck. Morning now began to dawn, which only threw light (as even the captain confessed), upon the heaviest sea he had ever seen. The black clouds seemed to fly, and the thunder and lightning to rend the very atmosphere asunder. Our distant haven was in sight; but the wind was foul, and it was therefore impossible to avoid making several tacks before we could get in. Our poor fellows, what from fear, cold, hunger, want of sleep, and being wet through, were completely worn out. I kept my station the whole night, more from fear than from any attachment to it; although I certainly did not feel the great alarm that was so visibly depicted on the countenances of most of my comrades. From extreme cold, and being quite wet through, I cut but a sorry figure by the time we began to near the land.

The prospect, from about three or four miles off, was extremely beautiful. Some little cottages studded the high and lofty rocks, and, here and there, small bays and little villages enlivened the scene, and consoled us with the idea that we were not going to be landed on a barren rock. We soon after saw the extensive town of Guernsey. Part of it seemed hanging on an eminence, and the view of the old castle, which is built of stone, and calculated to buffet with many a wintry storm, was extremely picturesque. In the distance we could see Fort George; and, in ten minutes after, we ran into the bay, which, being sheltered and protected by surrounding high-lands, was tranquil indeed, when compared with the main ocean. Boats were in attendance, and we soon set our wet limbs on terra firma. Having landed, I could not help viewing my person, of which I at all times had a good opinion. I looked for all the world like a squeezed lemon, or the bag of a Scotch pipe; and I should have been glad to have taken the edge off my appetite, and the dirt off my clothes, instead of dancing through the town; but I was, of course, obliged to obey orders, and when I struck up my tune (for I still led the fifers), I tipped Monsieur The Downfall of Paris. I found the march did me a great deal of good; and, by the time I reached the barracks, I was in prime order for my breakfast.

We were stationed in Fort George, in exceedingly good quarters, though I could not bring myself to be reconciled to the ponderous drawbridges in use there, which foreboded no great stretch of liberty. I was particularly fond of rural and pensive wanderings, to muse on nature's beauties, and the sight of an orchard, in particular, was at all times hailed by me with great delight; for I could feast upon its beauties for hours together, to the gratification of more faculties than my vision. The drawbridges seemed to cut off these delightful prospects. It was true, I could see them from the fort, but then the prospect was too far, and I lost all relish in the distance; and being in consequence compelled to steal out, I was apprehensive that some of my solitary rambles would get me into disgrace. My doubts and forebodings on this head were soon verified; for, in less than a week, I saw my name posted up at the gate,—'John Shipp, confined to his barracks for one week.' A week was to me an age. Confinement was intolerable: deprived of the pure air, of the delightful ramble along an orchard's hedge, and of the salubrious smell of the orange groves. Oft have I, from the rampart-top, sighed at the distant prospect, and, while my longing eye lingered on the golden produce of the orchard within sight, my heart panted to be at liberty, to take a nearer view and taste again of nature's beauties. The word confinement haunted me from one bastion to another, and I saw no refuge for the future but a more circumspect line of conduct, on which I firmly resolved.

When three long days of my week had been numbered with the dead, the drum-major was taken seriously ill, and on the morning parade the colonel inspected the drummers. I was always remarkably clean,—that was my pride: the colonel eye'd me from head to foot, and at last told the adjutant that I was to act as drum-major. I was nearly shouting liberty in the colonel's face, but I checked myself just in time. He at the same time gave me a ticket for a play, which was to be acted in the town, and, in the evening, several boys were committed to my care to accompany me to the theatre. Thus, for a brief interval, I was restored to favour; but, whenever fickle fortune deigned to smile upon me, some untoward circumstance was sure to happen, and nip the fair promise in its bud. I had scarcely got the stick of office into my hands, before I cut so many capers with it, that I soon capered myself back to the dignity and full rank of fifer; was deprived of my staff of office; and, of what I considered even much worse—my liberty. My name was again exhibited to public gaze at the drawbridge-gate, for seven long days, during which I was obliged to kick my heels along the ramparts, contenting myself with contemplating the distant prospect. One day I effaced my name from the list of the confined, unobserved by the sentinel; but in this I was detected by the sergeant, for which I had the felicity of attending drill three times a day with my musket reversed, and my coat turned inside out; and, in this manner, for several hours each day, I was obliged to comply with the mandates of a little bandy-legged drill-sergeant, who did not fail to enforce his authority and dignity in a manner by no means agreeable to my feelings, especially to those of my back. This I could bear well enough; indeed I was obliged to bear it; but my turned coat seemed to hang upon me like some badge of ignominy, and I imagined that every eye was upon me. Had I been a depraved and callous-hearted youth, this method of disgracing me would have only served to harden me in vice; and I cannot deny that at this treatment I felt the seeds of disobedience rankling in my heart, and had almost resolved within my mind, that the next time I was doomed to wear this garb of infamy, it should be for a crime worthy of such disgrace. I found my disposition soured, and the spark of revenge kindling in my bosom; and I am persuaded that this method of disgracing youth, instead of eradicating vice, serves only to nurture those rancorous feelings which irritation, arising from a sense of degradation, is sure to excite, and which, in the young mind, might, by a more judicious and conciliatory treatment, be either totally repressed in their birth, or at least easily extinguished.

Our regiment being now ordered to prepare for embarkation for Portsmouth, my garb of disgrace was thrown off, and I embarked as sprightly as any, having been disgraced in this way for a misdemeanor that would scarcely have disgraced a schoolboy. We reached our old barracks at Portsmouth, without any other occurrence save a little casting up of accounts, and a few distorted faces from seasickness.