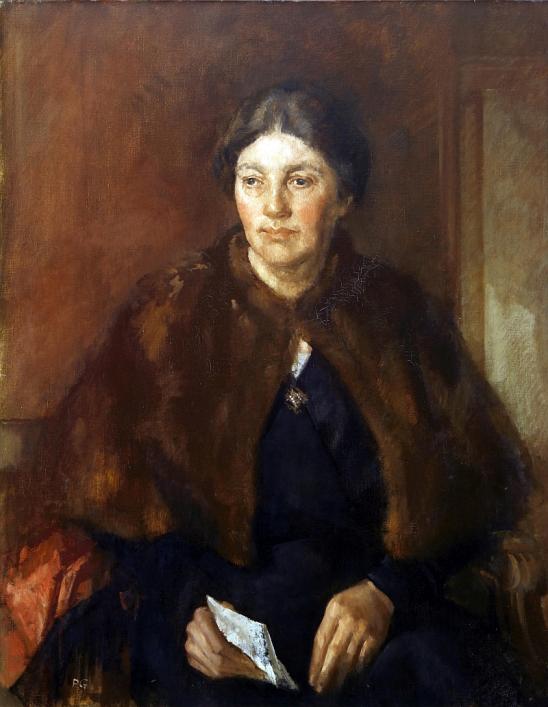 A brief introduction to the life of the scholar Julia de Lacy Mann, an Oxford economist and promoter of women's education, who was one of the last descendants of Margaret and Gother Mann. Without her work on her family letters Guernsey social historians would be very much the poorer. The arresting portrait of her shown here, attributed to Peter Greenham, is in St Hilda's College, Oxford, and is displayed here by kind permission of the College.

Julia de Lacy Mann (1891-1985), whose transcriptions of the fascinating family letters she owned form part of the Library collection, was the great-neice of Gother and Margaret Mann. Gother’s brother, James Saumarez Mann, godson of Admiral Lord James Saumarez, had married his first cousin, Julia Routh; their only child, James Saumarez Mann, was born in Guernsey and educated at Elizabeth College. A classical scholar and Fellow of Trinity College, Oxford, he married Amy Bowman, whose father was also a classical scholar and whose brother became Warden of Merton College. They had two children, Julia and her brother James Saumarez, two years younger than Julia. Julia read Classics at Somerville, while J. S. did the same at Balliol. He was decorated in the First War; he learnt Arabic and was a 'political officer' in Iraq when he was shot by a sniper in 1920. A memoir of him, An Administrator in the Making,1 is in the Library, edited by his father.

Julia de Lacy Mann read Classics at Somerville College, Oxford, from 1910 to 1914. Through her mother she became interested in social work, as the only option open to her except for teaching, she remarked, and spent the war years firstly obtaining a social work qualification at LSE, where she discovered her interest in economic history, then serving as a clerk in the Admiralty, 'and from 1916 to 1919 in the Foreign Office, attending the Paris peace conference as one of the staff.' [DNB] 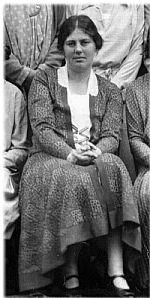 She returned to Somerville in 1919 to take an Economics Diploma with Distinction. In 1923 she became Economics Tutor at St Hilda's, and spent the rest of her academic life there. From 1927 to 1934 she was Assistant Editor of the Economic Historical Review, but the development of St Hilda's was her life's great achievement. ... Her portrait in St Hilda's dining-hall faithfully reproduces the serenity of her expression, but fails to convey her unusual height. In 1928 she was appointed principal of St Hilda’s College. She retired in 1955 after twenty-seven years which had seen conspicuous changes in the position of women at Oxford. Kind and imperturbable, sagacious and confident, she had watched her college almost double its numbers during her long period of office, and left as her memorial a courageous building programme for her successor to fulfil.2

She resided in Melksham after her retirement and died in 1985. A Fellow of the Royal Historical Society, she has an entry in the Dictionary of National Biography [may be seen in the Library], which explains that she came to her interest in Guernsey history following her retirement. She was the author of 'A Guernsey Merchant of the Commonwealth Period,' published in the Transactions of the Société Guernesiaise,³ which discussed the Memorandum Book of James de Havilland, one of the Parliamentarians who famously escaped from imprisonment in Castle Cornet in 1643. From her notes she had intended to continue publishing more articles based on this important text, which is in private ownership; however, a copy of her transcription of the Memorandum Book, which was written mostly in French, has been bound and is available for consultation in the Library. She contributed articles to the Review of the Guernsey Society: 'Further letters of the Dobrée family' (Winter 1986); 'Further Dobrée letters' (Spring 1981, Winter 1980, Spring 1980); 'Two Midshipmen in the Lebanon, 1842' (Winter 1978); 'Some Dobrée Letters' (Winter 1978); 'The Houses of Les Granges de Beauvoir' (Summer 1977); 'Some Amusements of a Family in Guernsey' (Summer 1974); 'The Sixties and the Forties' (Spring 1961); 'Early 19th Century Guernsey: Another View' (Winter 1960).

¹ Mann, J. S., An Administrator in the Making, James Saumarez Mann, 1893-1920, London: Longmans, Green, and Co., 1921. James Saumarez was not born in Guernsey but often visited. The book is poignant as might be expected, based on his letters to his parents and others from Oxford, the Front, India, Persia and Iraq, but interesting in that J. S., a speaker of excellent Arabic, was employed in Iraq as a Political Officer, where he ostensibly ran a publicity office out of Najaf 'which contains one of the most bigoted and stiff-necked populations of all the cities of Iraq;' despite his original misgivings, he seems to have become an important negotiator in difficult circumstances and to have enjoyed a relationship of mutual respect with the Iraqis. He had reached the rank of Captain when he was shot in the neck by a sniper and killed instantly. He was interested in archaeology and languages, and was a great friend of Gertrude Bell.

² Brittain, Vera, Women at Oxford: A Fragment of History in the Making, London: George Harrap & Co., 1960. Vera Brittain was also an undergraduate at Somerville. Permission to display the portrait and the photograph here have been very kindly given to the Library by St Hilda's College, Oxford.