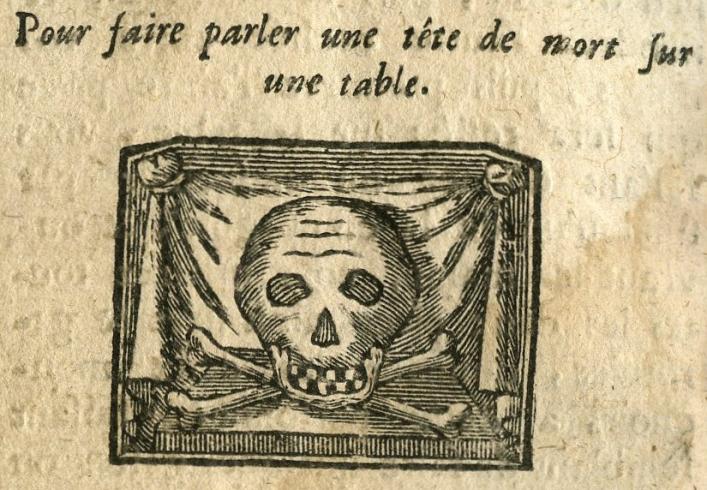 Grimoires are books of household magic. Two in particular, Le Grand Albert and Le Petit Albert, were enormously popular in France throughout the 18th and 19th centuries. A curious mixture of esoteric science and totally impractical superstition, they were for some time tolerated by the Church, with whose teachings they sat uneasily, but were prized by the ordinary people who tried valiantly to reconcile their belief in Christianity with their fear, or hope, that 'natural' magic might just have the power to overcome nature itself.

The illustration from Le Petit Albert shows various talismans, including one of a mandrake.

The Library has a small but important collection of works on 'natural magic,' which, rather than making use of spells to achieve a desired objective, describes the esoteric use of natural materials to change the properties of inert or living things, or to better understand the world through the process of divination. Traces of this kind of 'magic' are seen today in herbals, 'natural beauty' manuals, and everyday astrology, which we regard as innocuous, but whose use was nevertheless historically a dangerous practice.

The books and pamphlets in the collection have come to us mainly from one source, that of the Allez family of St Saviour’s parish. They range from alchemical treatises, through herbals, to chiromancy. Other complementary works are from the collections of Osmond Priaulx himself, and of the local historian Edith Carey.

Visitors to the Library are often fascinated to see a copy of Le Grand Albert, a famous 'grimoire,' or collection of popular magic. The Library has acquired several editions of this work and of its later companion, Le Petit Albert, some in small format and cheaply produced. These were both extremely popular in France, in the 19th century particularly, until the very recent past, but contrary to belief they are not collections of spells, curses, or incantations, and have nothing whatsoever to do with 'black' magic, although some of the activities they propose are morally neutral—they could be well or maliciously intentioned. In France and in the islands, these books were feared, as were those who possessed them, especially those who could actually read them; they were thought to be indestructible and to bring good luck to the owner, but to be impossible for the owner to rid himself of.

is concerned with the virtues of herbs, precious stones, and animals, with an abridgment of physiognomy, methods for preservation against the plague, malignant fevers, poisons, &c. The first book treats of the planetary influences in their relation to nativities, of the magical properties possessed by the hair of woman, of the infallible means of ascertaining whether a child still in the womb is male or female, &c. In the others there is a curious chaos of remarkable superstitions concerning urine, vermin, old shoes, putrefaction, the manipulation of metals, &c. [From Lives of Alchemystical Philosophers, based on materials collected in 1815 (1888) by Arthur Edward Waite.]

The book is attributed, though probably spuriously, to Albert Le Grand, a 13th century Dominican monk, whose real name was Albrecht De Groot. He was a superb scholar, a philosopher and divine, mentor to Thomas Aquinas, whose apparent interests in the esoteric earned him a reputation as a mighty sorcerer amongst his contemporaries. He was later credited amongst other things with the invention of the cannon and the pistol, to have known the secret of the philosopher’s stone, and to have made an automaton with encyclopaedic knowledge called 'the Android;' in addition to his own writings, other works of science and pseudo-science were ascribed to him.

Parts of the Grand Albert, originally written in Latin, do indeed date from the 13th century, and some of the text is possibly based on the work of Albert himself, or perhaps on knowledge at that time in currency amongst the Dominican order; from the first Latin edition of 1493, edition by edition the work was augmented with additions taken from other famous classical and mediaeval treatises.* A French translation appeared in Turin around 1500. The work seems to have crystallised around 1580 and to have been first published in its French classic edition, with illustrations, in 1703 as Les Admirables Secrets d’Albert Le Grand. A great deal of the first part of the book is dedicated to gynaecology, and some scholars believe that this part at least may be the work of, or plagiarised from, Albert Le Grand, who would in turn have based his work on classical sources. Other authors who unwittingly contributed seem to have included Pliny the Elder (Book XXX), Galen, and Dioscorides. The book also treats of physiognomy, alchemy, medicine, and from 1703 included an almanac of propitious days. The Grand Albert was first published in France by 'Beringos Frères at Lyons in 1651,' and was published in many more versions and editions, such as those in the Library collection. 'Beringos Frères, at the sign of Agrippa' never in fact existed; this pseudonym was often used to hide illegal or clandestine publication on the subject of occultism.

It was not until the 19th century that the books began to be frowned upon by the Catholic Church and had to be kept hidden, sometimes even underneath church altars in an effort to 'bless' them. Albert Le Grand is a saint, and it is likely that the association with him was deliberate, in order to keep the books tolerated if not approved by the Church. This strong desire to justify the use of natural magic alongside Christian belief is very well illustrated by others of the books in the Library collection; it appears the Allez family were well aware of the difficulties inherent in trying to reconcile their trust in the power of both. See Les Sorcelleries 1787. The Priaulx Library has several editions of Le Grand Albert:

Le Grand Albert: two Beringos editions from 1764. These match the Petit Albert of 1764, with title pages in red and black and very crisp printing of text and plates. We also have an edition of 1800, which is extremely plain in design, without plates and a very small typeface.

During the Revolutionary period hawkers, who were mostly responsible for the extraordinary success of these grimoires, were no longer allowed to sell cheap editions of books. For those who found the Grand Albert's forthright treatment of some subjects too much to stomach, other herbals were published under similar titles, such as:

This was a medicinal herbal and housekeeping manual, with recipes in alphabetical order. From the Preface:

We would like to point out the strong distinction between the old Secrets of Albert, and those which we are now publishing. A large part of the former Secrets of Albert deals with rather unsuitable subject matter, no longer regarded as decent material for today's reading public. 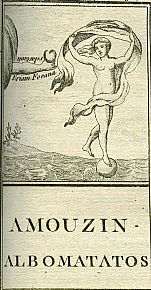 Le Petit Albert was first published in France in 1668. It is quite distinct from the Grand Albert, and equally unlikely to have been the work of Albert Le Grand. It owes a good deal of its more esoteric nature—discussions of talismans, mandrakes, and 'elementals' for instance—to pseudo-Paracelsus. There are recipes taken from the Italian philosopher Girolamo Cardano’s De Subtilitate of 1552, and Giacomo della Porta’s Magia naturalis of 1598, amongst others.

The Library has two copies of the same Berlingos edition of Le Petit Albert. One printed in 1764 has its title page in red and black, with the same contents as a 1766 edition, but so popular was the book that by 1766 the red ink had been withdrawn and the type was no longer as crisp. A Lyon, chez les héritiers de Beringos Fratres, A l’Enseigne d’Agrippa. A 1793 edition from the same publisher has had the plates redrawn and redesigned and some slight changes to the preface and title page.

To drive fleas away from the house and send them onto the legs of whomever you desire. Take some ass's milk and put some on to the shoe of your target and you will see all the fleas go on to him.

Although these books were owned by almost everyone in France, most of the recipes involve very expensive ingredients and many of the methods recommended to gain power over nature were totally impractical, but they perhaps demonstrate to us how powerless the ordinary man or woman felt over their everyday life, the mere possession of these books being the key potentially to influence their future and tame the apparent randomness of fate.3

Sorcery here is yet in a stage of evolution. It is the use of a bastard science of medicine germinating from the works of Albertus Magnus in the 13th century, transmitted through France. The Aurignais believe that the sorcier, per se, can work magic with the aid of Le Grand Albert and Le Petit Albert, the latter by far the worse, which contain indisputable rules of command over the secrets of Nature. These books are only to be spoken of discreetly, and with bated breath; for so many of the islanders have actually suffered from the effects of witchcraft, that one man said but lately: 'They ought to be put to the fire as uses them books.' It is interesting to note that there is little survival of the mediaeval belief that the magician must be in league with an external supernatural power, the devil. The Aurignais seem to have gone back to the primitive idea that the sorcerer can rule Nature by himself, if only he knows the laws that govern her magically.

....They were ordinary men and women, different only in that they possessed certain magical powers learned out of 'the books,' and all that was said about them was, 'Ils pouvaient faire de quai.'

....The children of another reputed witch took possession of her books and gave them to the priest, 'For the old woman was having too much to do with le diable.'

....A woman was sent mad for ten years, because she refused to show her baby's face to a sorcière. The husband of the afflicted woman declared later that he caught the witch's son trying to enchant his house; and that a year afterwards he snatched the book from which these things were learned, out of the man's coffin, and burnt it.

There are numerous Books of Magic, and the best-known here (Manche) are the Petit Albert, the Grand Albert, the Red Dragon, the Clavicule de Salomon, the Black Hen, the Grimoires ... It is no use trying to find within their spells a ritual or hidden sense; the sorcerer only uses them to attain a high enough degree of exaltation for his thoughts, his desire, and the spirtual suggestion to make themselves manifest.

*Editor's note: the extensive Wikipedia articles linked to above, on the Grand and Petit Albert, are the basis of the account of the historical development of those two books here: please refer to them for their authors. I hope that interested non-French speakers will find our account useful, and will note that the Wikipedia articles, although in French, also contain illustrations.