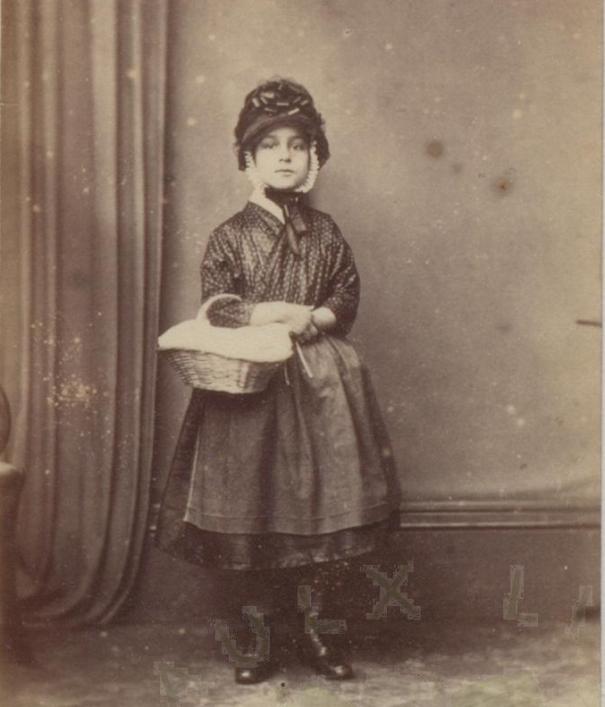 December 5 1893. 'Winnie's debut.' Winnie gave us recitations, Japanese Fan, Callisthenics, and all the rest of Saturday's delightful 'Breaking Up Exhibition' at the Ladies' College, at the end of her first quarter, to which Miss Gilbert kindly invited us all, and it was a rare treat. Living Halma most amusing, and The Japanese Fan, action song, very pretty. The children stand, like a fan, sing, and wave their fans most gracefully. Winnie was the second child on the left, dressed in white cashmere and pale blue sash, stockings, and baby ribbon. So pretty.

Friday, December 14 1894. Our Winnie was to have been one of six Fairies in the pretty cantata Who shall be Queen?; but as one of them was ill, Fraulein Hausknecht came on to the platform heading the procession of lovely little Fairies, with the littlest of them—Winnot—in her hand. There was great applause as they came on, and formed a bewitching picture round the maypole; while a throng of little mortals, many of them carrying long boughs of holly waving little trees as they moved, were choosing a May Queen in the wood, unaware of the Fairies, who flitted round and amongst them, with a peculiar step and movement of arms, most graceful and fairylike. The Fairies had wings, silver crowns, and wands, with stars. (Father made the crown and wings, Uncle John the wand with star point. Mother and Mrs Le Page made the costume, and Grandma got the dainty shoes, stockings, and gloves in London.) They were dressed in white tarlatane over white silk, with silver tinsel sparkling down. The mortals sang songs and danced, and here we heard, 'Tis the last rose of summer, which Winnie sang to us in her bath, à la Venus de Medici, that last night in October. The maypole dance went without a hitch; and 'Father Christmas'—Alan Carey—was first rate.

The Governor's party sat in the front row, and enjoyed it immensely, little Miss Stevenson going down one line of girls and up the other, before seating herself near her mother, just as an inspecting General would have done. It was pretty to see her.

Edith and Maybliss Wallace were watching the whole thing intently, standing on chairs in front of their mothers. When it was over Edith turned round, 'Mother! Winnie has done her very best!' So we all thought; she was perfectly simple, and natural, and enjoying herself throughout. 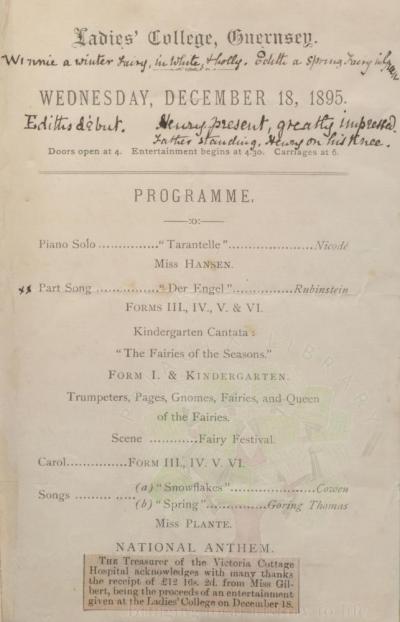 Wednesday, December 18 1895. Edith and Winnie were fairies at the Ladies' College. Father, and Mother, Henry, Uncle John, Aunt Loo and Ames there with a densely packed hall. The little creatures did their Fairyland perfectly, Edith 'to the manner born,' though it was her Début, complete ease and pleasure. Winnie enjoying herself altogether, with the prettiest face when Cedric pinched her wings.

Henry enchanted; rapt attention; on Father's knee (the little dog suddenly blew his boatswain's whistle, and was promptly smothered by Mother!) This was in emulation of the Trumpets and Beefeaters. 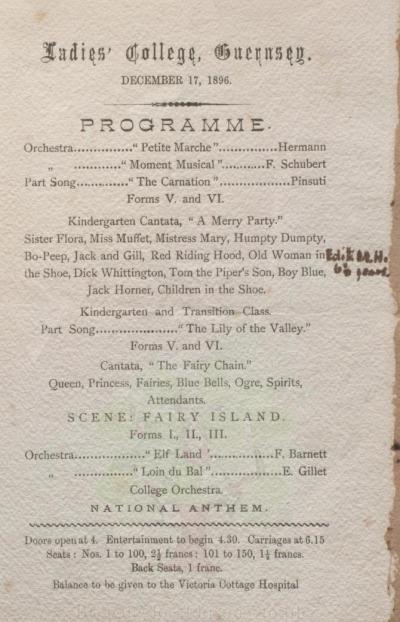 Edith began going to the Kindergarten in September 1895, but could not attend regularly on account of frequent attacks of asthma. Her progress nevertheless was good and she did admirably at her first breaking up Fairy cantata, when she had only just joined, December 1895, and again, dressed as the Old Guernsey Woman [see photograph of her costume above], for the Cantata December 1896.