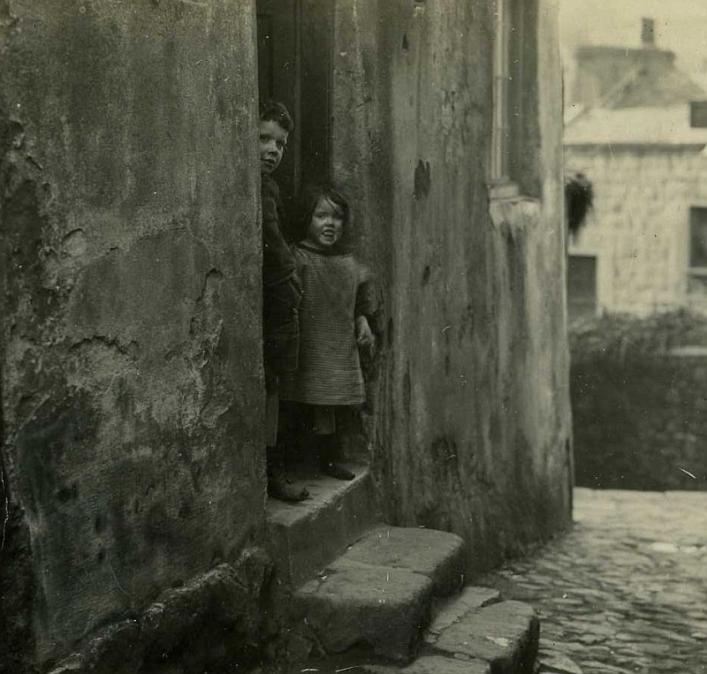 We asked the question: who wrote the following and when?

'Cross a ravine, go down and across Mill Street, into a sort of fissure between two tall houses, climb up a narrow and interminable set of tortuously winding steps with loose paving stones, and you find yourself in a Bedouin village; hovels, cracks in the roads, dirt alleys, burnt gables, ruined houses, deserted rooms, windowless and doorless with grass growing inside them, beams across the road, ruins blocking the way, here and there an inhabited cottage, little naked boys, pale women; you would think you were in Zaatcha.'

And gave you a clue: the original is in French. [By Dinah Bott]

Yes, the author was Guernsey’s Great Man Himself, Victor Hugo, and he was describing St Peter Port in the early 1860s. The excerpt is from his wonderful guide to the Channel Islands, L’Archipel de la Manche,¹ a work which was not published until 1883, after his death. Although intended by Hugo as an introduction to his 1866 Guernsey novel, Les Travailleurs de la Mer, L’Archipel was not included with it by publishers until the 20th century.

The dreadful conditions he describes here form only a small part of his description of St Peter Port, the rest of which is very complimentary. He has just come from the Rohais, where many wealthy Town dwellers had built fine houses:

The Chaussée d’Antin of Jersey is called Rouge-Bouillon, the Faubourg St-Germain of Guernsey is the Rohais. Everywhere are pretty and formal streets, all divided by gardens. There are as many trees as roofs in St Peter-Port, more nests than houses, more bird song than noise of vehicles. The Rohais has the aristocratic appearance of the grand districts of London, and is white and clean.²

The discrepancy between these and the 'slum' areas of Town near the Harbour are remarked on by all contemporary commentators. For instance, in Black's Guide of 1872:

The main street in St Peter Port is somewhat picturesque, but irregular, and badly built. It is tolerably supplied with shops. All the outlets from it into the island are narrow, dangerous, and bad. They rise almost immediately, and very steeply, and are indifferently paved. The visitor will be at first much surprised at the apparent poverty of the town. This impression is soon altered when the parts of the town are reached where the better class of inhabitants chiefly reside.³

The staff here at the Library first thought Hugo was referring to the Clifton area and Constitution Steps. However, as this was rather a pleasant place to reside then as now, they agreed that Hugo must have been describing the area around Cornet Street, which lay only just off his way home to Hauteville. In Rose-Marie Crossan’s recent book, Guernsey 1814-1914,7 she continues an analysis begun by Stevens Cox in 1991 of the census data from 1851 and 1901:

In mid-nineteenth and early twentieth-century St Peter Port, the addresses of town-dwellers, whether native or migrant, seem to have been determined by economic status to a much greater extent than they were by ethnicity. French and Irish labourers were concentrated in the South-East quadrant because they were poor, not because they were French or Irish. Substantial numbers of poor natives also lived in the South-East quadrant. Thus the composition of Cornet Street, arguably the shabbiest street in the sector was 48 per cent native to 53 per cent non-native in 1851 .... 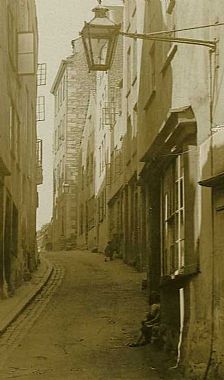 She explains that Irish migrants were disproportionately represented in the South-East quadrant (Fountain-Street, Mill Street, Bordage, Cornet Street) in 1851; by 1901 their place had been taken by French migrants.8

In 1843, Matthew Gallienne wrote that when he was younger (1800) the Tower Hill steps were 'narrow and winding, and the whole area had an old-world appearance.'4 Claudine L'Abbé's reminiscences of 1885 include a very interesting and detailed description of Cornet Street and its dwellings and shops, and some of their inhabitants.5 Edith Carey6 mentions a nearby block of six houses in St Peter's Court, off Fountain Street, which were demolished in 1867 'being deprived of all light and air by their opposite neighbours;' Fountain Street underwent a great municipal transformation from the 1820s through to the 1870s, and it is possible that other houses were left empty and derelict, which may have made an impression on Hugo. This area included some very shabby slum alleys, most notorious of which was Rosemary Lane, once known as Les Cottes, or 'The Huts,' which had previously provided shelter for members of the garrison.

Two of Hugo’s fellow refugees from France, friends who were thrown out of Jersey with him,9 also wrote about St Peter Port. His confidant Auguste Vacquerie was an appreciative Norman:

We are living in the island capital, St Peter Port; imagine Caudebec balanced on top of Honfleur. A Gothic church; streets old and narrow, irregular, fantastical, fun, cut through by steep and tumbledown steps; houses on top of one another, so that they all get a sea view. And a little harbour where the boats are piled up, where the schooners’ masts are always in danger of gouging out the windows on the quay.... The ships pass really close to us ... Fishing boats, sloops, three-masters, steam-ships cross paths in front of me almost like at Villequier; it is as alive as the Seine and it’s as big as the Channel; it’s a river and it’s the ocean; it is a street in the sea ....10

Hugo reports the thoughts of his friend, the newspaper editor Charles Ribeyrolles, who did not remain long in Guernsey:

Ribeyrolles, who ended up dying in Brazil, wrote, haphazardly, during his stay in Guernsey, a personal daily journal, a page of which I am looking at now; '1st January. New Year gifts. A ship on its way from Portrieux was lost yesterday on the Esplanade. 2nd. A three-master lost at Rocquaine. It was on its way from America. Seven men dead. Twenty-one saved. 3rd. The packet has not arrived. 4th. The storm goes on. 14th. Rain. Landslide killed a man. 15th. Heavy weather. The Fawn11 unable to leave. 22. Very gusty. Five incidents on the west coast. 24th. The storm keeps going. Wrecks everywhere.' No rest in this corner of the ocean.12

And where is Zaatcha, to which Hugo compares our capital? It is an oasis in Algeria, 187 miles south-east of Algiers; the nearest town is Biskra. It was the site of a significant battle involving French forces in 1849. The author Halim Cherfa describes it thus:

Not that long ago, the inhabitants of a group of oases known as the Zab-Dahraoui, one of which is Zaatcha, subsisted on the cultivation of dates, which they used as food and to barter with. Under constant harassment from nomads, who robbed and extorted tribute from them, their lot was particularly grim.13

4 Morley, May, ed., The Gallienne letters: 1835-1895: Jersey, May Morley, 1991, p. 4. This includes a reprint of a lengthy serialized set of very entertaining reminiscences by the Reverend Matthew Gallienne, originally published in the local newspaper, TheStar, in January 1901.

8 Crossan, p. 217. In 1851 the old-stock French were represented by middle-class shopkeepers; in 1900 there was an influx of Breton labourers. Many came via Jersey; see Mark Boleat's article. These families have left plenty of descendants in the island.

11 The Fawn was a 47-ton cutter owned by Lamble, Captain Piprell; see local Almanacs for the 1860s.

Question: who wrote this and when?

John Williams, seaman, aged 25 years, five feet five inches high, dark complexion, black hair, slender made; has a scar on the back part of his head; is tatowed, and a native of Guernsey; speaks French. Answer here!