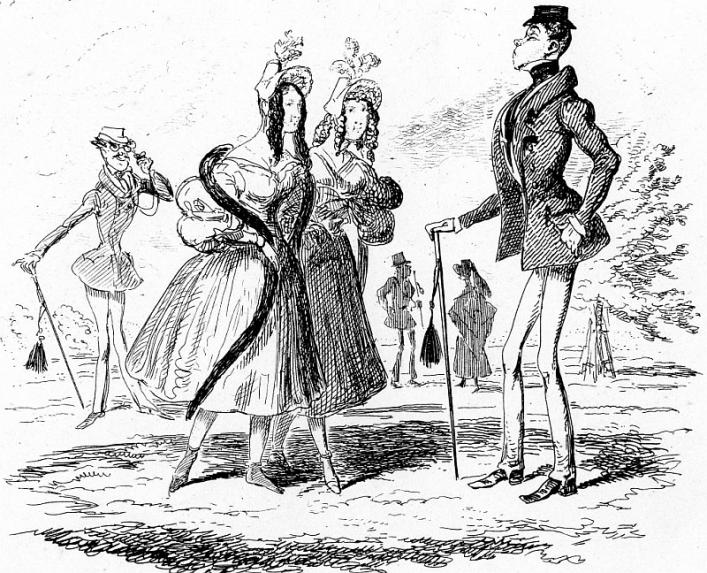 I am sure you would be pleased with the style of the houses with which the island is plentifully studded, and which range in their character through all the gradations from magnificent down to pretty. If you have any idea of ‘love in a cottage’, this is the place to fix on. The gardens by which the houses are surrounded are laid out with much taste, and kept in excellent order: and the interior economy would, I am persuaded, satisfy even your ideas of elegance and cleanliness. Indeed, if the people here have a ruling passion—a passion that pervades and strongly marks all classes—it is the love of their houses and gardens. I doubt whether in any part of England, on a spot of similar extent, you could find half the number of hot-houses and green-houses which are to be met with here; and I am told that their fruits and flowers are admirable. I confess I know very little on the subject by actual experience, for I carefully eschew the ways of all professional gardeners. I should be well contented would they allow me quietly to wander amidst their treasures; but, to be fastened on by the button,—to be walked regularly through the whole collection—to have every leaf and every stalk pointed out to you, and to be obliged to make a corresponding number of remarks or exclamations require s a larger stock of patience and a more abundant vocabulary than I am master of.

With respect to society by which term one generally understands the intercourse between persons of the upper classes, I may say that, virtually, there is none; for, with an ingenuity particular to themselves, the natives of this place have contrived to increase the unpleasantness of a small community by establishing so many imaginary distinctions of rank as to make it next to impossible to maintain anything like national solidarity. You will smile when I tell you that some of these worthy islanders, owing to their limited intercourse with other people, have persuaded themselves that, from the mere fact of some of their families having vegetated on the same spot for several centuries, they are therefore of the ancienne noblesse! These persons are the exclusives par excellence. After them come various and distinct classes of notabilities, who have each their little principles of exclusiveness to defend them from the contact of those immediately below them—and all concurring in excommunicating the ignoble traders. Thus split into small coteries, each of which surrounds itself with a sort of cordon sanitaire of prejudices, the materials of society are not easily brought together, and in fact, as I have already told you, there is nothing which deserves the name. I have heard public balls spoken of, but I believe from the dread of whom may be met with, and the difficulty of finding partners of corresponding rank, they are of very rare occurrence and but ill-attended. It is not a little curious that this amusing kind of ultra-aristocratic system should prevail in a place where nearly all the fortunes, which have not been made by privateering or smuggling, owe their origin to vulgar trade.

Now for the Guernsey lilies, alias the ladies. Of a great proportion of these interesting creatures, it may be very truly said that they are 'fair to look on', for their complexions are generally light and clear; and moreover they are really remarkable for the quality and beauty of their hair, which, by the by, in the simplicity of my heart, I verily believe to be natural, although some of the fair owners, could they see this letter, might perhaps be disposed to indulge in a quiet laugh at my credulity. They are mostly tall, well made, and well dressed; female critics, I believe, deny them that inestimable gift of ‘tournure’, but they have generally the nice unpretending look of ladies, which it is perhaps more difficult, and in my mind, more desirable to attain. To complete the portrait, I must add that they are by no means unkind looking, and that they all wear unmentionables; not, be it understood, in the way that implies 'the grey mare is the better horse', or that the ‘sceptre est tombé en quenouille’, but in the plain palpable form of cambric and calico. I am told, but I am happy to say that I know it not by experience, that the abominable taste for albums and scrap-books, so prevalent elsewhere, has spread its infection amongst the ladies of this island and that the same system exists here, as with us, of slyly saying ‘Oh, dear Sir, you must favour me with something—I’m sure you’re a poet,’ with no other view than that of being prevailed on in return, to give a specimen of one’s own talent. None of these receptacles of affectation and dullness have yet been sent begging to my door; but let the owners of then beware, for, as surely as she hopes to be married, if any young lady places her album or scrap-book in my hands, the one shall be scandalized by a naughty caricature, and the other by an unsophisticated tale of the guard-house.1

You will easily believe that my attention has been much less directed towards the ‘lords of the creation,’ than to the inviting subject I have just quitted. From the little I have seen, however, I doubt whether the gentlemen, in their intercourse with the ladies, would satisfy your ideas of preux chevaliers. I observe they are by no means assiduous chaperons, and their usual salutations are confined to a familiar nod of the head, or a slight touch of the hat with the forefinger: indeed I have heard a French lady very seriously inquire whether ‘ces messieurs’ came into the world with their hats on?

When you see your other hopeful nephew tell him that this place will not suit him. The tradesmen, it is true, have very orthodox, gentlemanly notions of tick, but he would find none, saving now and then a stray Englishman, to enter into his tastes. Sporting is out of the question, and ‘fancy’ at a barbarously low ebb; indeed, but for an occasional cock-fight, one would be disposed to doubt whether the light of civilisation had ever shone on the island.

'Farewell dear aunt, may you live a thousand years!'

With the same good wishes to you, Mr. Editor, I remain your very obedient servant, TIME-KILLER.

For a contemporary local example of exactly this kind of ladies' scrap-book, see the Album of Jane Chegwin, 1836, in the Priaulx Library collection.