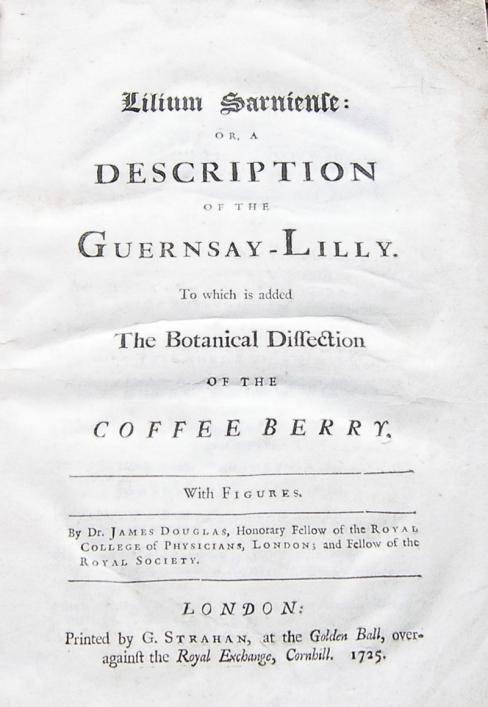 Lilium Sarniense, or, a Description of the Guernsay-Lilly. To which is added The Botanical Dissection of the Coffee Berry. With Figures. By Dr. James Douglas, Honorary Fellow of the Royal College of Physicians, London; and Fellow of the Royal Society. London: Printed by G. STRAHAN, at the Golden Ball, over-against the Royal Exchange, Cornhill. 1725.

Description of the Guernsey Lilly. The Second Edition.With Figures on three large Copper-Plates.By James Douglas, M.D., Physician in Extraordinary to HER MAJESTY. A honorary Fellow of the College of Physicians, London; and Fellow of the Royal Society.LONDON: Printed for George Strahan, at the Golden-Ball over-against the Royal-Exchange in Cornhill.1737.

The Description of the Guernsey Lilly was written by a famous physician, Dr James Douglas, who was born in West Lothian, Scotland, in 1675. He had interests in other aspects of science, particularly botany and zoology, and attended the University of Edinburgh. A well known anatomist, he was elected Fellow of the Royal Society in 1706, and FRCP in 1721. He was an obstetrician and was life physician to Queen Caroline. He did public dissections at his home, publishing important works on anatomy and the bones, and died in London, leaving a widow and two children.He was mentor to the obstetrician, anatomist, and collector William Hunter (1718-83), who lived in his home and to whom he left his papers.They eventually became part of the Hunterian Museum collection in Glasgow, where the original drawings and drafts of these volumes may be seen, along with medical case records, important anatomical drawings of Douglas’ and drawings and engravings of particular interest concerning the rhinoceros. It is not known what happened to Douglas' 557 editions of the Roman poet Horace. 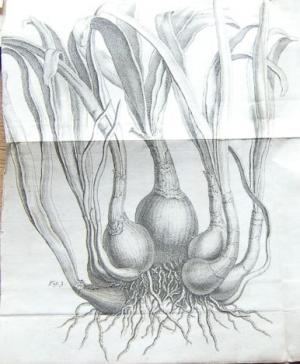 The first edition of the Description of the Guernsey Lilly also contains a description of the coffee bean, which was not included in the second edition, published in 1737 and also in the Priaulx Library’s collection. The second edition is much rarer than the first, and contains far more information of interest to the Guernsey historian. The text has been expanded by Douglas, and another plate with figures of the leafless Nerine bulb added.

... for the Flowers from which I principally took my Observations, I am obliged to the Right Honourable the Countess of Hartford, who did me the favour to send me, last Summer, a considerable number of Roots, from her Ladyship’s fine Gardens at Marlborough.They were planted for me in a proper Soil, by the skilful Hand of that expert Gardener, Mr. Fairchild, and they grew in Pots at my own House, where the Parlour had all the Advantages of a Hot-House, so agreeable to their Nature. [1st Ed., p. vi]

He gives us a most eloquent and accurate description of the bulb in flower, which may explain its attraction to those who have not seen it:

I am at last come to the most beautiful and charming part of this Flower, which is its Colour.This, I confess, I am not able to describe with that Accuracy and Liveliness which it deserves; however in the main, I may venture to say, that each Flower, while in itsprime, looks like a fine gold Tissue, wrought on a rose-colour’d Ground; but when it begins to fade and decay, it looks more like a silver Tissue, on what they call a Pink Colour.

When we look upon the Flower in full Sun-shine, each Leaf appears to be studded with thousands of little Diamonds, sparkling and glittering with a most surprising and agreeable Lustre; but if we view the same by Candle-Light, these numerous Specks or Spangles look more like fine gold Dust. [1st Ed., p. 15.] 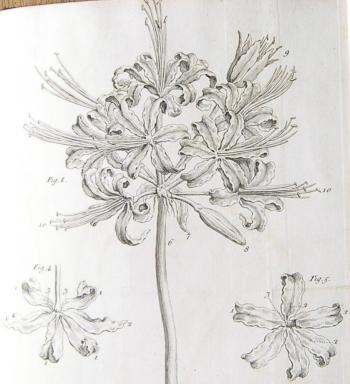 In the first edition he relates the story of the bulbs having arrived in Guernsey as the result of a shipwreck.They grew and flowered in the sand onto which they had been washed up.The second son of Lord Hatton, the then Governor, had rescued them and cultivated them at Castle Cornet, whence he had sent many to 'botanists and florists' in England. The second edition of the book contains a detailed analysis by the author of the various traditions of the origin of the flower in Guernsey.He dismisses the veracity of all but that related by Hatton, who was indeed a botanist who had trained at the University of Leyden.Ewen and De Carteret’s fascinating article¹ discussing the history of the bulb in Gernsey reaches the same conclusion, but gives a much more down-to-earth explanation of its arrival.

The authors contend that the bulb originally reached Guernsey as part of the garden of Colonel Lambert, a former Puritan, second only to Cromwell himself, who was sent to Castle Cornet under house arrest by Charles II.He almost certainly obtained it from the nursery of M Morin in Paris, which specialised in exotic plants.His wife joined him in Guernsey from London and is likely to have brought the bulbs with her. His daughter secretly married one of the sons of Lord Hatton, the Governor of Guernsey, causing a family rift. Lambert was a man in disgrace and it would not have been seen as desirable to attribute the origin of the Nerine sarniensis in Guernsey to him, so Hatton’s son made up a covering story to explain its arrival in the island. Despite this, Lambert was known as 'The Knight of the Golden Tulip.' Douglas tells us that John Evelyn was the first man to call what had been known since 1635 as Narcissus japonicus² (it was thought to come from Japan but is in fact South African) 'the Guernsey Lily,' and it so happens that Hatton and Evelyn were distantly related.

Let me tell you something of their name. The flowerists in England call them Guernsey Lillys: we call them, now, Belles Guerneziezes, Guernsey Beautys. But I remember very well that about 30 or 40 years agon, they were commonly called here, Fleurs d'Indes—Indian Flowers. I think this name is the best, and should be retained; because it agrees with the account of their comng here, according to Tradition. [From For Mr James Le Marchant scholar in Pembroke College, Oxford, &c., by William Le Marchant, July 22 1730.]

What deserves chiefly to be remarked about all that we have quoted from this Author [Evelyn], is that he is the first who has given any Directions about the culture of this plant in English, or called it by the Name of the Garnsay Lilly ... [2nd Ed.]

The Guernsey Lily was already known as Nerine sarniensis in Douglas’s time. He explains how Sarnia was believed to be the name by which the Romans knew Guernsey.The plant was very rare and Douglas tells us how very many bulbs were sent out to friends and botanists from acquaintances in Guernsey, where they were so easily grown and where they multiplied freely, and gives detailed advice as to their culture in Britain, based on the information he has obtained from those who grew it so successfully in Guernsey.

No doubt the beauty and health of this plant depends very much on its enjoying the free and open air, as much as the severity of our winters will permit; but after all the pains we have hitherto been at about it here in England, the gentlemen of Guernsey who have seen our finest flowers, are still of the opinion that they come very much short of theirs. [2nd Ed., pp. 71-2.]

See also 'The Guernsey Lily,' Report and Transactions of the Société Guernesiaise 1931, pp. 37 ff., by Sir Havilland de Saumarez, which transcribes the famous broadsheet belonging to the Saumarez family, The Golden-Red Lilly, called La Belle Guerneziese, a poem written by Francis Hoffman (in which 'Guerneziese' rhymes with 'these'), dedicated to the Dean, John Bonamy; and Van Kampen's The Dutch florist: or, true method of managing all sorts of flowers with bulbous roots; To which is added the particular method of treating the Guernsey lily, London: 1764.