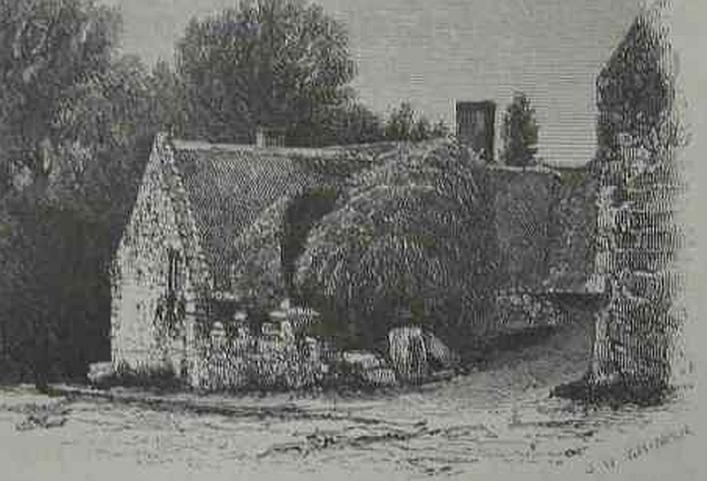 Once one of the very favourite places to visit on a Sunday and eat pancakes, and subject of a poem in Guernsey French by George Métivier. The illustration, entitled 'Stacks of seaweed at Alexander's Hotel' is from R. Ellis' Rambles among the Channel Islands, by a Naturalist, 1854.

Alexander's (for James Alexandre, its host) was a popular tavern and eating-place in St Saviour's, at Les Valles des Henry, called the Maison du Neuf Chemin, near the parish church and now lost under the waters of the reservoir.¹ George Métivier composed a poem about 'Mess Alissandre' and the family—'La Chanson des Alexandriens.'

Thomas Bellamy, in his 1843 Pictorial Directory and Stranger's Guide to Guernsey, says:

'At Lassy is a comfortable little inn, kept by one Alexandre, who has got himself famous for a peculiar method in making pan-cakes, whereby he can almost suit the palate of everyone. Here the stranger has the opportunity to return by the omnibus, which on certain days passes this way.' [Lassy = La Maison de Lassai.]

By this time the establishment, rebuilt after a fire in 1810, was known as the Royal Oak, and run by James Jnr, b. 1780. The family farm helped supply the restaurant with apples and pears, as well as the pancakes for which it was famous. Sunday was the favoured day to visit. The Alexandre family was originally from Jersey; some had settled early in Sark, however. James Alexandre married Marie de Garis (1747-1840) des Raies in 1773. He also built the Moulin des Hougues. See T. F. Priaulx's 'A diary written at St Saviour's', Report and Trans. of the Société Guernesiaise, 1952, p. 221. A study of this family and the inns at the Maison du Neuf Chemin and the Royal Oak, by Peter Girard, can be found in Quarterly Rev. of the Guernsey Soc., LIV (1), Spring 1998, and in 'The windmill of Les Hougues, Castel', Transactions of the Société Guernesiaise, 1954, pp. 399-400.

William Walmesley, who visited the island in the 1820s, stayed at a hotel called The Royal George at Perelle. It was kept by a Mr Dumaresq, and Walmesley's sketch of it from his journal can be found in A pedestrian tour of Guernsey and Jersey, ed. Renault, p. 33. Walmesley enjoyed his stay there, particularly the food, which he describes with relish.

We found the Royal George to be a place of great resort as a dining station for the inhabitants of St Peter Port, from which it is distant only five miles (p. 23).

It is a favourite drive to the Royal George which is much frequented during the summer months by parties, who by giving a day's notice can have a comfortable dinner provided for them. This house and another by Alexandre are the only two where accommodation can be met with.

¹ Photographs of the Neuf Chemin and the development of the reservoir can be found in the Library's collections (St Saviour's parish); please contact a librarian for more information.

Other 'lost things': Les Maindonnaux; Old Red House; Les Maisons aux Comtes; Lainé's store in Berthelot Street. See also Moullin, EB, in Quarterly Review of the Guernsey Society XI (1), 'The Old House of Les Beaucamps, Castel,' and a photograph of the house, built c. 1608, as it was in 1954, in QRGS XLIV (2), Summer 1988. It stood 300 yards east of the new school. In Guernsey's forgotten past, (No 153), Carel Toms says that the arch from this house was built into a new house, Le Merlin at Rue du Hurel, in 1966.