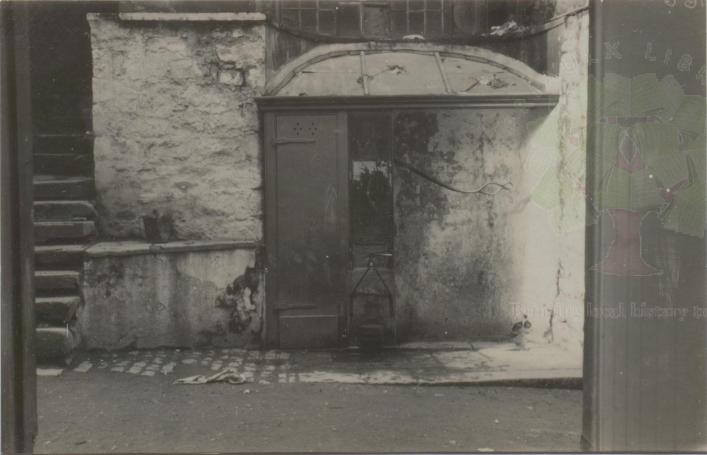 The Société Guernesiaise tried its hardest to persuade the authorities to preserve this ancient structure, but to no avail. From the Star, January 1933. The photograph is from the Library Collection. It was taken by Edith Carey in 1929 and shows the water pump in Cornet Street which drew from the well of the Tour Beauregard, and which was demolished along with the water tower in 1933.

Those persons who are interested in what remains of the ancient Beauregard water tower, and the well which still exists there, and which had given a copious supply of the purest water imaginable for many hundreds of years, will have to hasten to see it before it is completely destroyed. In consequence of the widening of Cornet Street, none of the old houses which used to stand from the top of the street to the tobacco factory, much lower down, now remain. The ground around the tower has been completely removed. The remains of the tower and the rock on which they stood now form an island. Inspection will reveal that the half of the tower which was allowed many years ago to remain is composed of massive stones, characteristic of the solidity with which our forefathers were wont to build, a feature which is characterised in every house in Guernsey over one hundred years of age. Visitors may notice two recesses in the back of the tower. Each is about 30 inches in height and about 15 inches in width. What they were made of is unknown, but what is evident is that as the bottom of the niches have a steep slope, they could not have been used as resting places for jars or any kind of object. Some are of the opinion that they formed embrasures through which arrows might have been fired in the event of the Tour Beauregard, than a fortified building, being attacked. The theory, however, has little foundation, for as the tower was enclosed in the fortification, those inside the tower would have fired upon the defenders. However, as all will soon have disappeared, archaeologists will have little opportunity to make further investigation.

The pump by means of which water was drawn from the well in the tower was taken away several months ago, since when the residents of Cornet Street, who used to proclaim that the water from the well was the sweetest to be found in the island, have to obtain their supplies elsewhere.

One relic of the Tour Beauregard, about which many a gruesome tale of torture and burnings for witchcraft is told, however remains, and that is the old flight of steps composed of massive stones by which visitors may ascend—after receiving permission and obtaining the key from the Constables—from the top of Tower HIll to Hauteville. The steps, it will be seen, are built over by a house, but the passage is intact. The gradients leading from where the wide steps stood a few weeks ago, to the plateau near the houses in Rosemary Lane to Ozanne Memorial Hall and St Barnabas Church are well advanced, and to all appearances will be completed in a few months' time. What will become of the plateau and the site of the former houses is not generally known.

No trace of old structure left

The old water tower once attached to the long-extinct Chateau Beauregard on the Rosemary Lane plateau, which of late has stood isolated at the top of Cornet Street, has now completely disappeared. Thus a notable feature of the Town parish for at least 600 years is no more, and the 71-foot-deep well, which once furnished a copious supply of the purest drinking water, is filled to the brim with rubbish. A speciality of the work of the builders in the 13th or 14th centuries was the quality of the mortar they employed, which hardened to such an extent that the laboureres engaged in the task of destroying the tower were compelled to use steel wedges to separate the stones.

In the Transactions of the Société Guernesiaise for 1931, just issued, Major S Carey Curtis, the Secretary of the Antiquarian Section, says of the Société's efforts to save the tower, 'The matter is in abeyance ... and it is hoped that a satisfactory conclusion may be arrived at, and the Société may rest assured that everey effort will be made to preserve it.' To this is added the following footnote: 'It is pleasing to report that since the appeal was made to the powers that be to preserve this unique bit of old St Peter Port, it has been decide to divert the traffic as suggested.'

But the hopes of those desirous of preserving this ancient monument have been dashed to the ground, and they are left to deplore its destruction.

In the Report & Trans. of 1922, the President of the Société Guernesiaise talked of the ruins in his address:

... and even a few remnants of the Tour Beauregard at the top of Cornet Street. These few walls and buttresses, such as they are, should, I think, be taken in hand at once, for, should the rebuilding of Cornet Street be carried out, it would inevitably disappear. It is such a  misfortune that no survey was taken before St Barnabas' Church was built, when so many old walls and doorways must have been destroyed [p. 99].