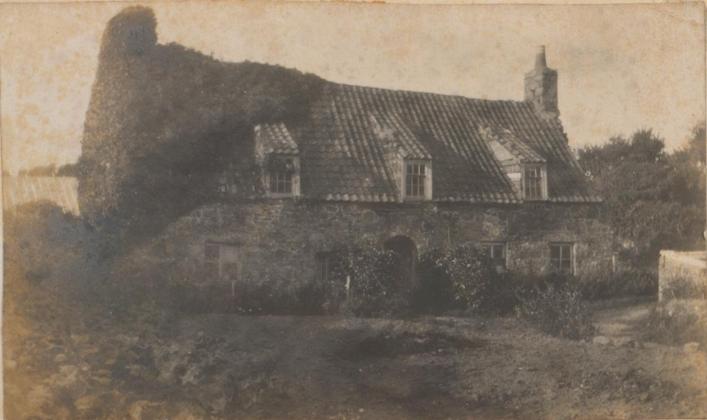 General Oliver de Lancey William's only academic production, a notebook of a survey of old island houses he undertook in 1956, full of interesting observations, not just about fireplaces. It was presented to the Library in 1960. The photograph, taken by Edith Carey in 1904, is of La Maison Jean Sarre, 'an old house going to ruins near Bon Air, opposite L'Eree Schools, with a beautiful old carved granite chimney piece, with heads for corbels.'

1. Bon Air, Les Adams, St Pierre du Bois. In field just north of house is an old cottage with cobble-stone floor, surrounded by bushes, you cannot get in it. Granite fire-place in cottage, corbels only remain. On each corbel is a face, one smiling and one sad.

2. The Manoir at Ville au Roi. When this house was destroyed only the lintel of the fireplace was saved. The lintel was broken in two but the remains are now outside the Lukis museum at St Barnabas. The De Beauvoir crest is on the lintel.

3. The Seigneurie, Torteval. Stone transom. Two eyes on the corbel said to be owl's eyes. Rough carving on jamb. One side only of the fireplace remains. [Illustration.]

4. La Bernauderie, Câtel. Theodore Carey writes: 'Mansion house and store house behind present modern house. 2 very fine cut granite fire places in wonderful condition; magnificent archway is a study in itself.' I visited the site, found practically no trace of the old house. The modern one built 1821 belongs to Mr C Collas of Ernest[?] Villa, St Sampson's. He told me both fireplaces fell to pieces and were scrapped. The arch he has re-erected in his garden. I notice two corbels from the fireplaces were used to support the arch.

5. Ruined house on Bouillon Road, St Andrew's. Above lintel of door in the road: Heart P P G M Heart C B Heart 1730 [illus.]. Two fireplaces in house. One upstairs with transom gone. Downstairs one complete. Both have good corbels and slight carving. Over to the right House, probably stone, in same enclosure, has I G V 1776 marked on it. The house was called La Fausse Equerre and was formerly an inn.

7. Le Catillon, St Peter's. Mr W J Sarre. Granite transom: P B 1616 L B engraved on it, said to be Brouards. Corbel on right side only, with slight carving on corbel and jambs. The left side of fireplace was evidently a furze oven. Fine Norman arch on outhouse.

8. Les Rouvets. Mr [.] Bell. Very large fireplace in excellent condition, about 9 foot high. No transom. Quite a lot of carving on corbels and jambs.

10. La Hougette, Paysans Road, St Peter's. Two fire places, both spoilt. The upstairs one is plastered all over. Only one corbel remains of the one on the ground floor.

11. Duvaux Farm, St Sampson's. Miss H G Ogier. Fine fireplace now in use. Part of the transom is covered in wood. Slight carving on corbels. The fireplace had been concealed by plaster for many years.

12. Grande Maison, L'Islet, owned by J F Roussel. Downstairs. One fireplace with only two corbels standing well out, the rest are all plastered over. One with one jamb made of Caen stone, the other of granite seems to have been added later. Upstairs. One with transom half-covered wood in what was servants' quarters. One in perfect condition, very little carving. The house owned about 1800 by the Fallas. At that time it was fashionable to have brick chimney stacks and they took down the two granite stacks on the main building and erected brick ones. This was altered by the present owner, Mr Roussel, who has repaced the granite ones.

13. La Hougette, Castel. Mr and Mrs N Jee. 4 fireplaces. 1. Upper room complete; owl's eyes on corbels and lots of carving on corbels and jambs. 2. In dower house or barn. Good fireplace, no transom. 3. Outside. No transom, corbel one side only, other side furze oven. 4. In shed outside. Very long but rough with no transom. On the outside wall of the house is what looks like a fireplace transom with coat of arms [arms of Ozanne, illus.].

14. Les Grands Courtils, St Saviour's. Lt.-Colonel Leeming. One fire place, on ground floor. [Illus.] Wooden transom. The corbels are carved and a small head at the bottom of each corbel.

16. Les Revaux. Front Room. Fine fireplace with wooden transom, otherwise complete. Several initials hard to identify on jambs, look like C M C H. Back Room. Large oven is on left side of fireplace. No transom. Corbel and jambs on right side only.

19. Sausmarez Manor. 'In 1863, when General George de Sausmarez was near St Peter's Church, he found the old priest's house near the near the fork of the high road leading to L'Eree being demolished. A massive granite fireplace was lying in the road and was to be broken up and used as road material. He bought it for £1.' This very handsome red granite fireplace in excellent condition is now in the servants' quarters at the Manor. Corbels and jambs are very finely moulded.

20. La Maison des Pauvres, L'Islet [Les Islets, SPB]. Mr Herbert Brouard. In what is now used as a cowshed in the Maison des Pauvres is an old oven and fireplace. A stone transom and well-moulded corbel on the right-hand side. The left side has no corbel but has a large oven.

22. Le Gron Cottage, St Saviour's. The oldest inhabited house in St Saviour's. Two corbels only remain od the old fire place, rest has been built over. The house is occupied by Mr J McLaren, owned by Mr J A Bourgaize.

23. Le Hurel, Saints. [.] R G Davies. Until four years ago the house was thatched. There was a fine fireplace in one room, but it has been bricked over except for the corbels and jambs. On left side is a small corbel and jambs of ordinary size. On the right is the largest corbel I have seen, it projects 2 feet two inches into the room; it is 1 foot eight inches across. The jamb is made from five large stones.

24. Les Niaux. Les Niaux Valley leads into the Talbot Valley from the south. At the southern end on the east side of the road is a ruined cottage called Les Niaux, probably the first house built up the lane. It contains the remains of a red granite fireplace. The transom remains. On left side is a furze oven. On right side a corbel pushing out 21 inches.

Photograph and letter from S M Henry, the photographer, concerning a fireplace at Sous l'Eglise, St Saviour's, dated November 1956. 'Now ploughshed, formerly the parloir. It belonged to the de Garis', one of the leading families in St Saviour's. Reference was made to this old house in Professor Moullin's paper, read by Mr Priaulx at the Société Guernesiaise meeting last evening.'

At end of book: Letter dated 13th February 1956, from S M Henry re Bon Air Cottage, is called 'La Maison Jean Sarre;' mentions among others a house at King's Mills, Les Granges de Beauvoir, Ville au Roi, the oven at La Fausse Equerre; 'the Bernauderie fireplace is no more in situ.' Archways. 'Two only in Guernsey, la Maison des Pauvres and the old house at Les Poidevins, have a slit opening—a balisteria—i.e. an aperture from which to shoot bolts for defence. One wonders what social conditions must have been here when the builders had to provide for defence when they built those houses. At the Ville au Roi and the Rocque Balan (Vale) in the demi-lune stairway there were loop-holes to cover the door entrance. What a pity that not more interest was taken, even 100 years ago, in our old links with the past. How much could have been preserved that we would prize so much today.' [With drawings.]