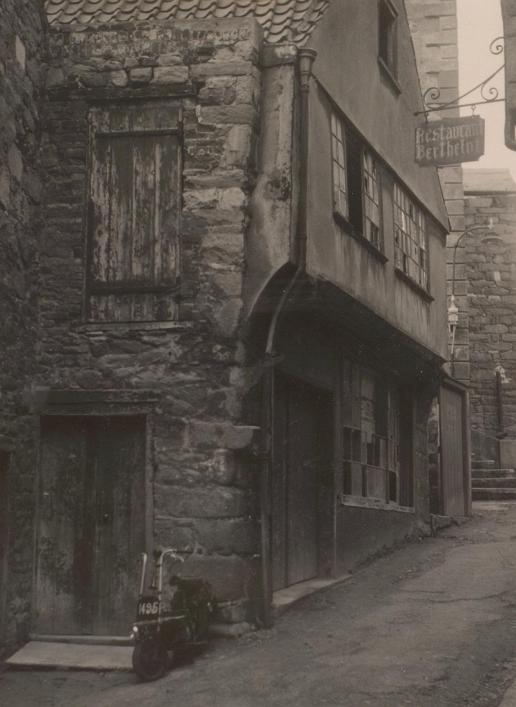 'Demolition and rebuilding of one of the oldest houses in St Peter Port is to take place shortly. The house is one belonging to the Guernsey Savings Bank and stands opposite the Berthelot Street Restaurant.' An article by (probably) Carel Toms published in the Guernsey Press November 15 1950; photographs of the demolition and rebuilding are in the Toms collection at the Library.

The houses in [Berthelot] Street are some of the most ancient in the town and among them is the Savings Bank premises, formerly known as Maison Briard. The old house to be pulled down stands at the rear of the Bank and will, when finally rebuilt, considerably enlarge the existing Bank premises, which for some time have been cramped for room.

Readers will be pleased to hear, however, that no modern concrete and steel construction will raise its ugly head on the site of the old house. Although slightly different in appearance, the new building will ne constructed partly in granite and will completely harmonise with the existing old-world atmosphere of bow-fronted windows and corbels which are so characteristic of the Restaurant opposite.

It will be recalled that the house has been empty since the war; its broken windows and otherwise dilapidated appearance slowly deteriorating. A quaint old character, but one without life.

It is 63 years since the Savings Bank moved to its present premises from the corner of Fountain and Cornet Street. Then a private house known as Maison Briard, the premises were altered and adapted to the needs of the Bank, the Trustees carefully preserving outwardly the ancient character of the building.

This property dates back to 1594, and it has been ascertained that in the 13th or 14th century it belonged to a Mr Guille, and that what is now Berthelot Street was his own private road to his fields at the back of the premises, and known as La rue Berthelot-Guille.

Up to and just before the war, the premises were used by Messrs Lipton Ltd as a store. Before that, however, the old house was used by three successive hardware merchants; R G Agnew, of High Street, and before that, Messrs Lainé and Giffard.

Messrs Agnew used it as an oil store and also for powder and shot. There was also a stable there and large underground tunnels, used in earlier periods for the storage of wines.

When the Bank took over the premises it was previously the home of Jean Briard, a Jerseyman by birth. 'He was one of the earliest Guernsey privateers of whom we have record,' wrote Major W Rybot, in an article on 'The Merchant Marks of the Channel Islands,' published in the Transactions of the Société Guernesiaise.

The stone corbels in either side of the entrance of the Bank bear Jean Briard's merchant's mark, one of six marks which exist sculpted in stone. In 1616 Jean Briard was made to throw these corbels six inches further back by a Vue de Justice. Complaints were registered by his neighbours, the De Beauvoirs, that they blocked the view. They claimed to be entitled to see from their upper window not only the Carrefour, but the whole of the jetty below their house, the jetty in question being that of the old harbour.

Hanging on a wall of the Bank for all to see are three wooden panels. They formed part of the internal decoration of the original house, the centre one being carved with Jean Briard's mark, similar to that in the corbels, with the addition of the date 1617.