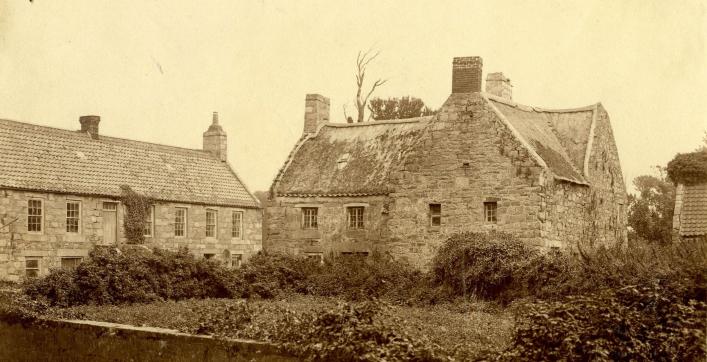 'One of the quaintest possible specimens of an old Guernsey dwelling'; so says the author of a report in The Star, October 20, 1915, under the byline: 'Another ancient landmark disappearing.' The photograph is by Edith Carey. She says tradition had it that the house was built in the 12th century and was connected with the Fief au Comte; the house on the left was demolished in 1921.

The days of the ancient 'Maison aux Comtes' at the Vale, which has stood, it is estimated, for about 700 years, are numbered. The Maison aux Comtes, which stands on the left of the main road leading from St Sampson's to the Vale, is almost contemporaneous with 'St Magloire,' which also came to an end some months ago, having been burnt down about last Easter.

Although it was regrettable that the Maison aux Comtes should have to be pulled down, it was almost impossible for the owner, Mr George Fallaize, to do otherwise. The thatched roof was going fast, the floors were decaying, and the gable end showed signs of collapse; in fact, the house was beyond repair, and it is not probable that the Health Authorities would have allowed it to be occupied by anyone, especially as the floor of the lower room was simply earth.

The house was built in the substantial manner which characterised our forefathers, as everywhere the walls are 2ft 6in in thickness, and exceedingly small windows had been introduced here and there. Access to the upper rooms was by means of a circular staircase in stone, the interior wall here bulging out towards the exterior. 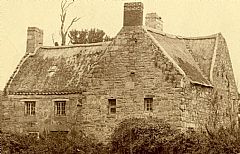 An interesting feature of the house is a massive oak beam 1ft square, stretching across the room on the ground floor, whose lower outline had received attention ages ago, and been carved into a kind of scroll, which met in the centre of the beam, against which a carving had been securely fixed. This represents (the bottom part of the carving has been broken off) faces resembling Cupids or Cherubims, between which is a well defined fleur-de-lys. On either side of this carving are two others, distant about five feet away. One apparently is a bunch of flowers, possibly roses, while the other is a diamond-shaped carving within another diamond, in the centre of which is a square which bears the representation of something which, however, cannot be made out. Whatever the carvings are, they are worthy of preservation, and might be secured by some antiquarians before the beam is destroyed.

Not even the old people who live in the neighbourhood are able to throw any light upon the former residents of the house, but that it was once an aristocratic dwelling is clear from its title, 'Maison aux Comtes,' which goes to prove that it was in older days occupied by Counts—possibly Normans.

It appears, however, that the house, sixty or seventy years ago, was used as a private school, and was the first seminary which Sir Henry Giffard, KC, attended as a boy. An old woman who passed at the time we were near the house told us that she also attended school there some seventy-five years ago.

Adjoining the Maison aux Comtes is another extremely old dwelling, a feature of which is the exterior flight of stone steps flanked by a stone wall which leads to the one upper story of the building. There is a date, 1739, carved on a stone over the front door, but the place is apparently very much older than the date, probably between 300 and 400 years of age.

The Maison aux Comtes was one of the quaintest possible specimens of an old Guernsey dwelling, which makes it the more regrettable that with the march of time it has to disappear.

The house is marked on the 'Duke of Richmond' map, but not assigned a number by John McCormack in his 1980 book The Guernsey House. It was situated in the middle of the present Maisons au Compte road, on the southern side.