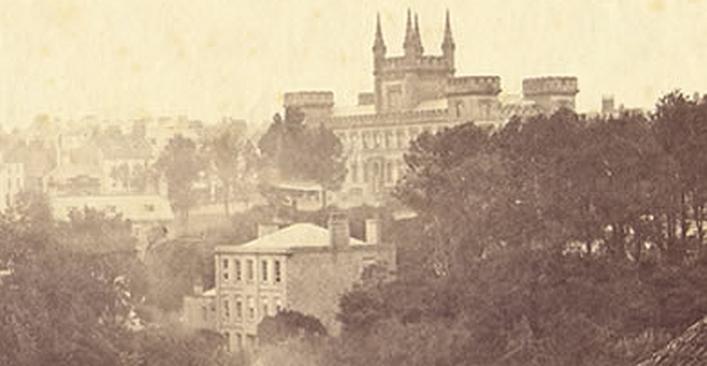 Research into the Parker family of St. Peter Port led to an interesting line of enquiry into the history of their house, 'Old Court.' The Parker family are described as living in Old Court in the 1851 census, but the researcher was unable to tell the client where it was, or anything about it—no-one on the staff had ever heard of it before.

A search of the Priaulx Library's image library revealed a photograph of 'Old Court House, demolished 1873.' A detail from it is illustrated above.

But where exactly was it, and why was it demolished? The proximity of Elizabeth College is a huge clue to the location, but camera angles can be deceptive, so one of the library assistants, armed the library digital camera, went off to see if he could get a similar shot. The results are below: 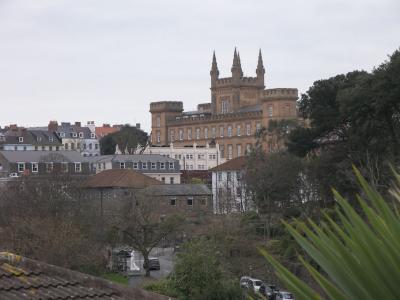 It would appear by comparing the two that the Old Court was once somewhere in the region of the junction of St. Julian's Avenue and Candie road. Just to double-check this hypothesis, the photographs were compared to an 1843 map of St. Peter Port: 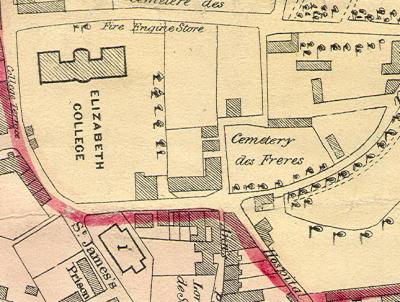 Could the Old Court house be on this map? To modern eyes, the map looks strange and out of orientation, partly because St. Julian’s avenue was not built until 1874, and the major route to the North Esplanade was Le Truchot. However, neither Hospital Lane or College Street have moved and the approximate location of St. Julian’s avenue can be guessed at. There seem to be two candidates for Old Court house in the land between the Cemetery des Frères and Hospital Lane, with the house adjoining Candie Road being definitely the preferred. Was the house therefore demolished to make way for St. Julian’s Avenue? An article in The Comet newspaper for April 2nd, 1873 has the following to say:

A little more than a year ago, the site of the New Avenue was a terra incognita, except to the occupants of the ‘dingy’ houses now demolished. But one respectable dwelling, Old Court, was on the line of road.

Which does seem to imply that the house was demolished. In fact, the Guernsey Magazine of May 1872 reported:

NEW ROAD. On Monday, the 25th March, the first sod of a new road was turned in the grounds of Old Court House, Candie Road. The building, &c. of Old Court, were sold by auction on Saturday, the 30th March, and realised £230.

The staff wondered if there were any traces left. The digital camera was sent out again to investigate the wall that separates Candie Road and St. Julian’s Avenue: 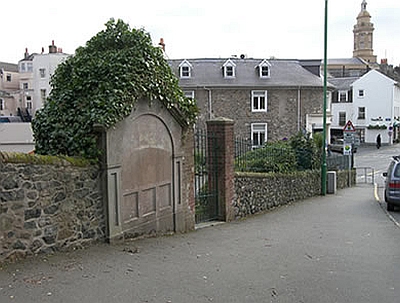 Were these strange features once part of Old Court House? It would certainly be tempting to speculate that they were, but it is now believed that they were part of the development of Candie Gardens as a pleasure ground and formed part of a kiosk and display area.

Just to finish off the project, the following description of the house was found:

From The Star newspaper, dated May 27th, 1856. The Old Court was described as new in 1856, yet had been demolished by 1874, a sad end to an interesting family house that until now, very few people had ever known of before.

Since this research was completed, a watercolour painting of Old Court House came to light, having come up for auction on September 9 2008 in Guernsey, and one of our own photographs, entitled 'College Street in 1861,' was discovered to show the side of the house and its position in the road very clearly.