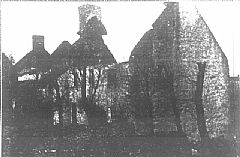 Fire at the Vale.

A fire which broke out last evening destroyed the oldest house in Guernsey, known as 'St Magloire,' and situated at La Moye, Vale, near Fort Doyle.

The house was thatched and the woodwork of the interior very old, therefore it burnt freely and there was little opportunity to save the furniture in the house. There was some difficulty getting a good supply of water and a high wind was blowing. The house was burnt out, little but the walls remaining. A large crowd gathered and witnessed a fine spectacle when the fire was at its height. The flames could then be seen for some distance.

The Fire Brigade was called at 7 o'clock, and it was stated that the fire was at L'Islet, at the other end of the parish. Time was thus lost and the fire had been burning for over half an hour before the Brigade arrived on the scene. There was a shortage of water, but after a time the Brigade were able to obtain a supply from a tank near Mr Collas' 'Paradis,' yet their efforts were of little avail, and only a small quantity of the furniture in the house was saved.

The house was partly occupied by its owner, Mr H T McBain [actually Henry T Bean] and his wife, the remaining rooms being occupied by Mr J Calker and his wife and children. The roof of a carpenter's shop used by Mr McBain's son at at the back of the house was slightly damaged by fire.

The cause of the outbreak was a catching fire of a beam extending into the chimney.

The house was visited last year by the members of the Guernsey Society of Natural Science,1 who were greatly interested in the quaintness of the building and the solidity of its walls. The thatched roof was very old, many of its principals being the yards and parts of the masts of vessels that had been wrecked on the Vale coast. The floors, too, were of great age. 'St Magloire,' the name by which the house was known, was of greater antiquity than could be determined, but tradition gives its age as being the same as that of St Sampson's Church. It is feared that the ancient structure has been damaged by the fire beyond repair.

1 Report and Transactions of the Guernsey Society &c., 1914, pp. 110-11. 'The party then proceeded through La Route des Chapelles to the house called St Magloire, in the neighbourhood of which Mr [Adolphus] Collenette said at one time two chapels existed, La Grande and La Petite Chapelle. Unfortunately no trace is left of either. The party visited the house now known as St Magloire, which has the reputation of being the oldest in the Vale parish. Tradition says it was built in the year 1111. It certainly is extremely old, as may be gathered from the thickness of the walls and the smallness of the windows. On the south side there is a circular staircase in stone, about 15 steps, which leads to the chamber. The roof is thatched, and the principals are composed of timber of the roughest description, and apparently of great antiquity. The flooring is supported by strong beams, also very roughly finished. Some of the beams consist of vessels' masts or bowsprits, which are said to have been taken from wrecks which occurred on the coast of the Vale. There is an enormous fireplace. It is so large, that to meet modern requirements part of it had to be partitioned off. On the north wall, which is about three feet thick, an alcove was made of sufficient depth to accommodate household utensils of considerable diameter. The interior, throughout, is certainly one of the quaintest which can be seen in the island.'

[See The Guernsey House No. 996, where it is dated at c. 1400-1550; in Quarterly Rev. of the Guernsey Society, XXXVIII (3), 1982, it is redated even earlier by the same author, to 1350-1375]. St Magloire is at present (2014) being rebuilt; some of the original features appear to remain, including a large part of the tourelle staircase. It is likely to have once served as a presbytery attached to the Vale Church, not necessarily the presbytery (it is very inconveniently placed for that.) Tradition has it that it was the presbytery for the now disappeared Chapel of St Malière (St Magloire), and it is not known what name, if any, it originally bore, but again, it is dated probably too late to be contemporary with the chapel itself.