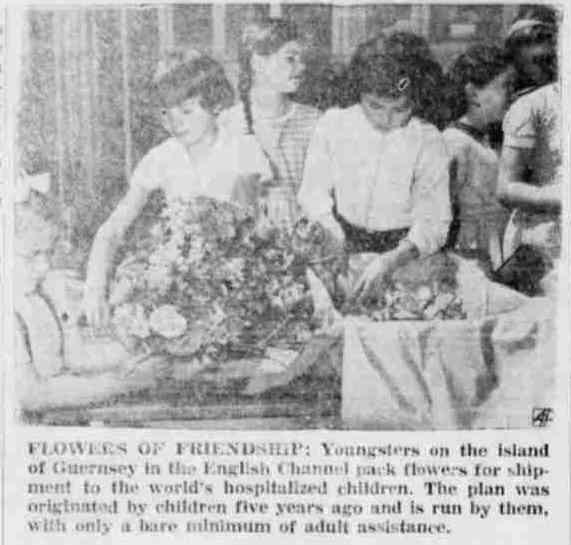 Guernsey, Channel Islands. (Associated Press in the Lamb County Leader, June 4, 1959.) 'Five years ago a little girl picked a wild primrose—a single primrose that has blossomed in to an amazing organisation called the Love Apple League.

And in lives on unselfish thought. Children shut away in hospitals, far from sunny fields, should have flowers.

The girl who did the first picking was named Garth. She was playing with another girl named Gillian.

‘What a wonderful sight’ gasped Garth. ‘A million flowers’ said Gillian. ‘Wouldn’t ill children love to see them. I wish we could send just hundreds of them to children lying in hospitals.’ I know it would make them feel better,’ said Gillian. ‘Let’s pick them,’ said Garth. ‘Hundreds of them.’ ‘How’re we going to get them to the children?’ ‘I don’t know,’ smiled Garth, ‘but let’s start picking.’

Laden with armloads of primroses the children staggered home with their fragrant load and showed them to their father.

‘Look,’ they chorused, 'we’ve picked them for children in hospitals. How can we get them there?’

‘Let’s take them to the airport,' said the father.

So they and the flowers went to the Guernsey airport.

There they spoke to the first man they saw—Herbert Hill, manager of the airport restaurant. He listed to their story.

‘Come with me’, he said, making his way to a waiting airliner. ‘Captain,’ asked Hill, ‘these little girls want you to take these flowers to England—to sick children in English hospitals. Can you do it?’

‘I can and I will,’ he said, loading the primroses in to his aircraft. He flew directly to Birmingham in Britain’s industrial midlands. He personally took them to a hospital for children. Two days later the letters of thanks began to arrive in Guernsey.

‘Dear children,’ one of them began. ‘Thank you very very much for the flowers. It was a beautiful idea. The flowers are so beautiful, too. Your flowers are brightening our ward. It gives us great pleasure just to look at them and sniff. We are already feeling better. Maxine Smith of Ward 6.’

Hill looked a the letter and smiled. ‘Now, Garth and Gillian,’ he said, ‘you’ve started something.’

The idea spread. Other Guernsey children began collecting flowers and bringing them to the airport. The pilots fell in with the idea. Flowers started being delivered all over the world.

‘You need a name for your organization,’ suggested Hill. ‘Now, what’ll it be?’ The tomato is Guernsey’s main fruit. They are shipped everywhere. The children wanted to connect the flower-sending plan with the tomato. But how?

Finally they settled on the tomato’s ancient name—Love Apple.

That’s how the Love Apple League got started. Now it has important links all over the world and even is a corporate member of the United Nations Organization. It has more than 1½ million members in 20 different countries.

The Love Applers, now five years old, are going to have an international convention. It will take place in Guernsey between May 20 and May 25. The keynote will be ‘World-wide goodwill.’ Children are expected from England, France, Holland and India, and Hill hopes a party of refugee children will be flown in from Central Europe.

‘It’s a children’s league,’ said Hill, and they’re going to run it. We just supervise and make suggestions.’

A special party for the Ockenden Venture—the United Kingdom enterprise which brings young refugees to Britain, educates them, and trains them to earn their living—is included amongst more than 50 youngsters who will be coming to Guernsey from various parts of the Mother Country to attend the Love Apple League Children's Convention. [The rest of the article can be read in the Library.]