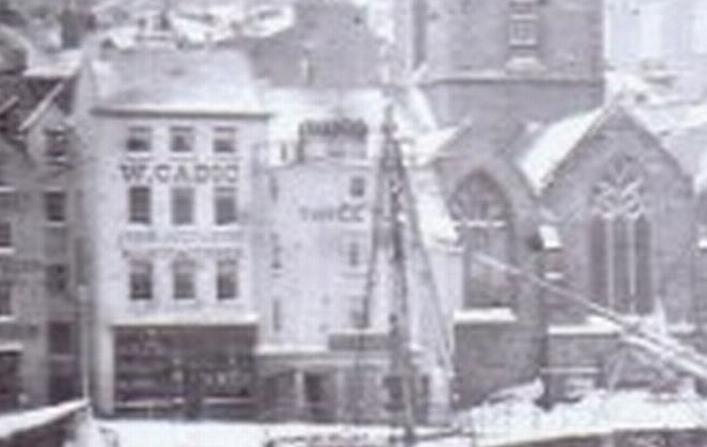 Lots of trouble over French brandy. The illustration is a detail from one of the earliest photographs in the Library's collection, dating from 1845, showing Cadic's 'inn near the South Pier,' not far away at all from Cow Lane, the scene of the crime. Next door to his establishment was the inn, the 'Three Tuns,' proprietor Mrs Simon.

This was an action entered by H A Mansell, Esq., one of the Receivers of the Impôt, against Mr Robin, to show cause why he should not be fined 700 livres tournois, according to the 10th clause of the Ordinance of the Royal Court, dated 21st January 1833, for having, the said Robin, purchased Brandies illegally landed from the French Chasse Marée, Marie Joseph, without paying the duty of one shilling per gallon, imposed by the Ordinance in question.

The defendant called no witnesses: those of the plaintiff's after having taken the oath required, deposed as follows:

JOHN ROUABELLE. I belonged to the Chasse-Marée Marie Joseph, we ran into St. Sampson's harbour, Capt. Le Bourgeois, landed several pipes of brandies. I assisted in putting one pipe and four firkins in a boat which were landed in Cow-lane in the night. Goueneau [alias 'Luco'] was in the boat; he told me that Mr. Robin had paid him three hundred francs for the brandies. 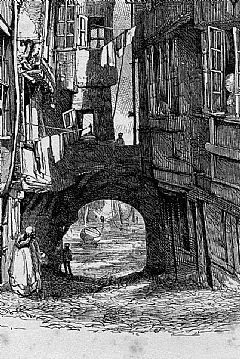 THOMAS GARDNER, corroborated the above evidence, and in addition said, the brandy was landed in Cow-lane (see engraving above)  between one and two o'clock in the morning; Mr. Robin assisted in putting it into the store; the pipe was for Cadic.

Mr. W. S. SHEPPARD, Constable. I had orders to seize two firkins of Brandy at Mr. Robin's, on application to him he at once declared he had four.

Several other witnesses corroborated their evidence as given them on the 22nd inst. After which ADVOCATE FALLA in behalf of the defendant addressed the Court as follows:

Gentlemen, when witnesses were ordered, my client was willing to leave his case to the mercy of the Court; but after the evidence you have heard, and especially Mr. Sheppard's deposition, I trust that my client's frankness will be favourable to him. I am aware that on Saturday last the principle in these cases was deceided, but this day, I beg to observe, that Mr. Robin is a respectable young man just entered in trade and of very little means; he has paid Goueneau 360 francs for the Brandy, which together with the loss of the liquor is a great punishment to him. My client knew Goueneau who offered him the Brandy, Goueneau observing to him to be fearless as he (Goueneau) should see the impôt paid. When the liquor came to Robin's house at so unusual an hour, my client observed it was too early, and Goueneau replied, we were obliged to come now on account of the tide. In one part of the Ordonnance it is stated that the purchasers of any spirituous liquors are to give a list of particulars to the impôt-office, within 15 days; it was, of course, Mr. Robin's intention to obey the law had not his action been initiated so soon against him, in fact he was obliged to take the consequences on himself, but his intention was to send in the required list. I now claim the indulgence of the Court, and trust for a mitigation of the fine, reminding you, Gentlemen, of the open, frank, and immediate avowal of my client.

THE ATTORNEY GENERAL for the plaintiff said,

Gentlemen, I wish that cases like the present were conducted in the same manner they are in England. I have known the defendant for a long time, he distinguished himself and conducted himself as Assistant Constable so as to receive the unanimous thanks of the Court, but notwithstanding all this, I have a bounden duty to perform. I am sorry to see so young and respectable a man under such an accusation; he has defended himself but I see nothing in his defence to prevent the court granting to the plaintiffs the full fine, as the case is proved without a doubt against the defendant. The brandy was received by him between one and two o'clock in the morning, he assisted in placing part in his store and helped to roll a pipe for Cadic, the man who was tried on Saturday last, and condemned. The price paid is also against him, which shews he must have known the fraud, and by his conduct has participated in it. I do not wish to make a distinction which might be disagreeable, the people are free, the impôt is left to the honour of the public as no officers are established for the prevention of fraud on its revenue, it is therefore the duty of all and everyone to exert themselves to prevent any abuse of the existing law. It appears Mr. Robin has paid 360fr. for the Brandy, but it is not for me to consider that part of the defence, the Court may draw its own conclusions from it, and therefore I ask the full penalty with costs.

The Bailiff said the case was clearly proved, and that the participation of fraud was evident; that in the detail of the transaction there appeared nothing favourable to the defendant, that in his (Robin's) public career he had distinguished himself; that he was young and just beginning business; that the liquor had been condemned and the price paid for it, lost. He proposed a mitigation of the fine.

The Court condemned defendant to a fine of three hundred livres tournois and costs.

MANSELL and OTHERS VERSUS AUGUSTE GOUPILLOT. This action was precisley of the same nature as the above. In this case, as in the others, the witnesses were the same, the greater part of whom corroborated what they had previously declared, save John Sagère, who said: I was employed by Capt. Le Bourgeois, of the Marie Joseph. I assisted in rolling a cask of brandy at Goupillot's; it was not full, Goupillot was present; he told me he had received 260fr. for it, the brandy was received by Goupillot about one o'clock, PM. Auguste Petran and John Pratt corroborated Sagère's deposition and added that Goueneau had sold some wine, that he was a Commercial Agent and a pilot.

Mr. H. D. JEREMIE. I went to Goupillot's house who declared to me without hesitation that he had purchased a pipe of brandy and paid for it; I then ordered him up to Court; the declaration was made to me by the defendant, openly and frankly, long before the sitting of the Court.

The other witnesses called proved the price of the Brandies and the condemnation of Le Bourgeois.

ADVOCATE FALLA, for defendant. This case is favourable to my client. The brandy was purchased and transported in open day. Goupillot could not be aware of any fraud; it is proved that Goueneau was in the habit of selling wine, and when he offered this brandy to my client, he bought it—this is a strong fact. Both in England and France merchandise is often sold for half its value. My client had had the brandy in his house three days; he might have emptied it, without his declaration and frank avowal the seizure could not have taken place; he has paid 260fr., and lost the liquor. He is an honest young man, and no complaint was ever made against him. It is a favourable case, and I trust that should the Court think him susceptible of a fine, that it will merely be a nominal one.

THE ATTORNEY GENERAL, for the plaintiffs, hopes that Goupillot would reflect on this accusation, and trusted that it should be the last time of his appearing under such circumstances. It was true that Goupillot, unasked, came forward and declared the purchase. After a few other remarks he concluded to his being fined, the amount of which he left to the discretion of the Court. The Court finding so many circumstances in favour of Goupillot, condemned him to a fine of only fifty livres tournois and costs. Similar actions were entered against the following individuals, namely Mr. Thomas Roumey, Mr. Victor Le Noble, and Mr John Martin (of the Bouet), but there being no proof of their having purchased any of the Brandies, they were acquitted and the plaintiffs nonsuited.

Three of the actions instituted by the Crown Officers against various individuals, for having purchased some of the brandies belonging to the cargo of the French Chasse Marée Marie-Joseph, were heard and decided last Saturday.

The first was against a Frenchman named CADIC, who keeps an inn near the South Pier. It appeared he had bought two pipes from GUINOT, the individual who acted throughout as the Captain's factotum, and that he had when first called upon by the constables, frankly confessed he had made the purchases. He was fined in the moderate sum of 500 livres tournois, or £35 14s 3½d sterling, and costs! [See the Star of July 8, 1833; Cadic, who confessed immediately, was regarded as hard done by and H D Jeremie, the constable, actually paid part of his fine.]

The second was against Mr. SOUZAC, a French wholesale dealer, who has been established in this island about fifteen years. He employed no counsel, and called no witnesses, but cast himself, as he said, on the mercy of the Court. It was not proved that he had purchased any of the brandies, but that he had taken two pipes into his store, which he had afterwards sold, on commission, for the captain, to Mr. H. R. ANGEL. He was fined in the sum of 50 livres tournois, or £3 7s 7d. sterling, with costs.

The third was against Mr. ANGEL, It appeared he had purchased from Mr. SOUZAC, and as he was sued for having 'bought from a person unkown, or if known, having no fixed establishment in the island,' and it was admitted that SOUZAC was both known and had an establishment here, a verdict was given in his favour by all the jurats except one, who was for fining him 50 livres tournois, for having bought the brandy at too low a price.

McCathie, C.J., 'The Story of a Business House in St Peter Port,' Quarterly Review of the Guernsey Society, XIV (4), Winter 1958, pp. 64 ff. The history of wine merchants Cadic and Bucktrout.