The Library has in its extensive local militia collection a photocopy of what was no doubt a most invaluable document in its time: a suggested drill, and loading instructions for the flintlock musket, written in the early 18th century for the officers of the Guernsey militia by Phillips Loggers. 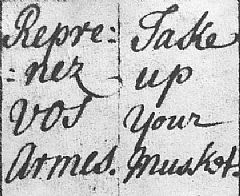 The booklet is signed by Loggers, who is as yet unidentified,¹ but may have been of Dutch or Irish extraction, and is quite possibly in his handwriting. On the cover it is written that the original copy of the manual belonged in the collection of Mr G. Gosselin of Beaconsfield.² We would love to know if it is still in existence! Click on the picture below for a larger image of a typical page. 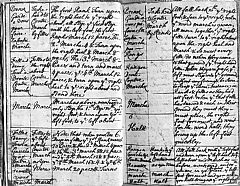 The booklet opens with these words:

To the most worthy Gentlemen, Officers, belonging to the Trained Bands in the Island of Guernsey. In which after the eighteen years serving, Our Late and gracious Sovereign Lord King William the Third of Glorious Memory, I am become an Inhabitant and a Small member of the Said(?) Trained Bands, and finding the noble inclinations of some young Gentlemen who are desirous to learn a true method of marching discipline, I have as in duty bound discovered this short method thinking it to be the plaine and easiest way to bring young Learners to perfection as ever was yet published: For by and thro’ these methods, all other figures are made & perfected, so heartily, wishing these may be as well accepted as they are usefull,

I Remain Gentlemen all, Your most humble & Obedient Servant, Assisting in all matters tending to the safety honour and wellfare of Her Majesty, and this Her Island of Guernzey, and the Inhabitants thereof, Whilst I am, Signed Phillips Loggers.

He begins with a very detailed explanation of how to arrange men into Filles et Rangs. The officer must count the men and place them in Divisions, each containing either four or six ranks, depending on orders. If there is an odd Fille left, they are to go in the Front Division, and then in the Rear. Once the Officer knows how many men he has in each Division, he orders them six deep or four deep, 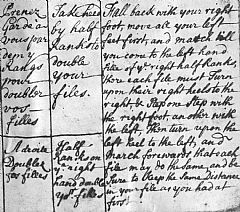 by telling the right hand man of each Rank to Stand, onely to turn upon his right heel, and the left hand man to wheel up forwards: So that the Commander who intends to march them, He commands as followeth: Rest your Musquet, /présentez vos armes, Shoulder your Musquet/Mousquet sur l’Epaule; Then Standing four paces distance from the Right-Hand of the Company, the Commander, To the Right hand Form your Ranks/A Droite formez vos Rangs en avant, March/Marche: then before he march He must look that all are right in their places. In your marching, you are to carry your armes well, and your heads up, and keep four paces distance in your Ranks, and eight paces in each Division and when you come to march to the Right, The Right man of the Front Stand, and turn upon his right heele, and the rest of the Rank wheel round in a full Body, and every Rank must do the same when they comes to the Ground; and if you go to the Left, the Left Hand man of every Rank turn upon his left Heele, and the rest do the like as before mention’d.

The officer must decide whether to turn right or left depending upon the state of the ground.

Before this, when the Filles are close, the Sergeant or Agent, must take as many Paces from the left of the Batalion, or Company, as there is Filles, and mark the Ground, Where the left Hand man of every Rank must stand; and every Fille must stay until the other is a pace distance before them, and then move softly (Note) that when every one face to the Right with your muskets shouldered, you must fall Back with your Right Foot, and if you march, When you come to your Ground let your Left foot be foremost, and then when you Halt bring up the Right againe, So when ever you Face to the left, fall back with the left foot, and if you march, when you come to your Ground, let the Right Foot be foremost and when you Halt, bring up the left foot again. So when the Ranks and Filles are dressed and made Strait, if it be a Batallion where there is many Officers, the Sergeant Post them-selves in the Rear, then the Commander says, Officers take your Post in the Rear of the Batallion/Officers prenez vos Postes a la Queue ou Arrière du Batallion, then the Officers advance their Pikes and turn to the Right about March/Marche, then the Sergeant advance his Habard, and march about twenty paces from the Front; and there they remain until the Batallion come to wheeling; and they are to take their Posts in the Front again, but they must be Commanded, there before the Filles and Ranks are Closed.

Then follow several pages of complicated instructions for the loading and drilling of the musket, consisting of the French Mots de Commandement pour l’Exercise and the English translation, Words of Command for the Exercise, and the Explanation (in English) for each of the commands. Here are a few examples:

Portez bien vos armes/Carry well your armes. Carry your musquet upon your shoulder, the Butt opposite against your Buttons if they are in ye middle of the breasts, and the Guard of ye hiyar[?]. Clost to the Shoulder, with the Head up and Body Straight, the Right hand hanging down upon ye Sides.Prenez garde a vous pour faire l’exercise du mousquet/Take heed to Exercise your Musquets. 2) Motions, First Bring your hand up, to your hat ; as if it was to Cock it ; Secondly bring it down quick where it was before.

Tirez la Baguette/Draw your Ramrod. 4 Motions. First take the head of your Ram Rod between your thumb, & the second Joint of your fore fingers, Secondly Draw out as far as you can at once. Thirdly, Turn your hand ye back towards you & back it between your fingers and thumb Close by the Barrel. Fourthly pull it out quick and draw it.

Haut la Baguette (Cet mot commandement est hors d’usage)/Hold Horn up (command no longer in use). 1 motion.Turn the end which is next you upward and hold it with a full hand and your armes straight out your thumb upon against it.

Racourcissez-la a un Pouche/Shorten your Ramrod to an inch. 2 Motions. First put the Lower end against your belly equall in a Line with your Musket, Secondly slip your hand down within an inch of the end.

Enjoue/Present. First fall back with your foot to a Treangle as before mentioned, and bring up the Butt of your musket close to your Breast, and soe that he be upon an Equal balance, and put your finger before the Trigger and Stand with your left leg a little bent, and your right straight.

Feu/Fire. No motion at all but only pull ye trigger with your finger.

This pamphlet has been scanned in full. Contact the Library for further information.

¹ The St Peter Port Burial registers give the death in February 1725 of a Philippe Logas, Chaplain to Castle Cornet. The chaplains for the castle ministered to the garrison in English. They were sometimes local men [see Actes du Colloque, II, p. 204, for example, where a busy Monsieur Hearne has to share himself between the Forest parish, St Martin's, and the Castle once a fortnight, but is let off having to preach at the Town Church], but at that period were Army chaplains from out of the island, an example being the Huguenot refugee Adrian Saravia, who had been chaplain to William of Orange, and in Jersey Revd. Edward d'Auvergne, who served with King William in Flanders in the campaigns of 1691-1697, and published an annual history of them. In 1675 François du Bois, the Rector of St Andrew and the Master of the 'Royal College' was buried in St Peter Port; he was also 'Pasteur de la Garnizon.'  Between 1684-1698 the Reverend William Johnston was the Army Chaplain; his widow wrote to Lord Hatton in 1699/1700.

It is worth noting, however, that the registers at that period are full of quaint spellings, and in the same year another well-known Huguenot refugee (arrived late 1718 from Guyenne, his wife following in 1719), Solomon Lauga, lost his son, Daniel, and is recorded in the register as 'Salomon Lougas.' In the Livre de Perchage Le Roi St Pierre Port 1706, we find: 'Edward de France and his co-parceners in their house and garden to the north of Dame Margueritte de Saumarez' [her house was at the Tourgand.] Then next to him, 'Philippe Loggers et femme en leur maison et jardin qui fut au Mr William Le Marchant Junior au No[m] dudit de France.' In fact, the 1732 Livre de Perchage of the Fief Le Roi of St Peter Port [Fol. 291] only adds to the confusion, as the house and garden in the Pollet is then recorded as belonging to: 'George Lucas pour Philippe Loggers et femme.'

² On the cover the pamphlet is dated c. 1745. This dating seems to have been based on the assumption that the musket drill was written as guidance after 1000 muskets were given by the British government to the Guernsey militia in 1744-5. Groves, The Royal Guernsey Militia, Vol. I, pp. 9 ff.: Peter Carey was, in 1607, supposed to buy rondaches and muskets for the militia, but appears to have pocketed the cash instead—in 1629 Heylyn (in his A Full Relation of Two Journeys &c.) remarked that Guernsey's 'trained band consists of only 1200 and these, God knows, but poorly weaponed.' At that time Sir Peter Osborne had ordered that 'all Captaynes and Lieutenants carry partizans, and every Sergeant a halbert.' There was, however, a store of muskets kept at Castle Cornet for emergencies, and the wealthier members of the 'trained bands' had always been expected to provide their own pikes and muskets, so the date of the creation of the drill cannot be certain. All we can know is that 'Loggers' was living in Guernsey, and wrote his preface at least, during the reign of Queen Anne (1702-1714).