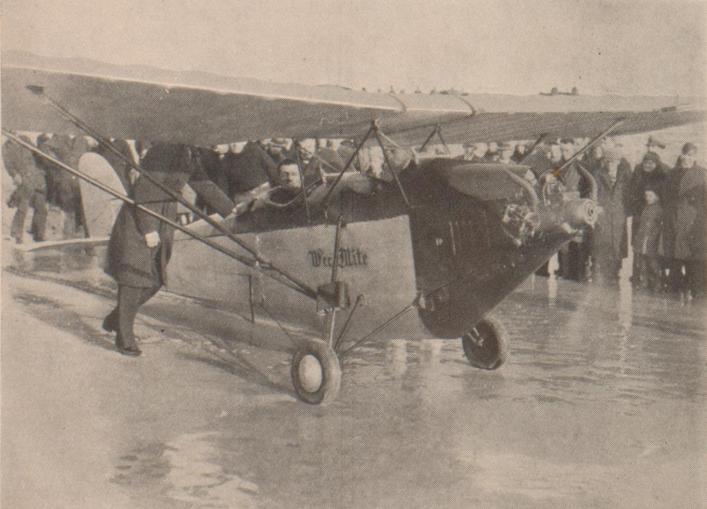 'Once an airman, always the itch to fly,' says Mr C W Noel, whose experience in the air dates back to the early days of the RFC and RAF. [Noel wanted to take up flying again, in the Channel Islands...]

A secondhand ABC Scorpion engine of 30-40 hp coming on the local market made the proposition feasible, and the necessary planning and designing began. Even with his past experience as a pilot-instructor, Mr Noel found that the limitations of the island with regard to take-off and landing made the theoretical side of the business a tricky undertaking, and it was nearly six months before the plans and blueprints were completed.

Early in the summer of 1932 the practical work was commenced, and in this the designer was joined by a small band of enthusiasts almost as keen as himself. The first job of the work was the creation of the propellor. This was of mahogany, two-bladed, 3ft 4 in pitch, and was manufactured entirely in Guernsey. When fitted to the engine it was tested out on the sandy foreshore mounted on a Ford chassis which suited the purpose admirably.

So far so good, and the engine was put aside until the following winter while the fusealge was built to receive it.

At last the engine was placed in position and early one summer morning, like a gang of conspirators with a body in the bag, Guernsey's air pioneers smuggled their new-born babe through the sleeping streets to the sandy stretch of Vazon Bay.

Here she was put through her speed, control and acceleration tests. As was to be expected, adjustments were necessary, but these were so slight that they served rather to flatter the skill of the designers and builders and the exactitude of their labours.

The calulation of the centre of gravity was found to be slightly at fault, having been estimated at from 1½ to 2 inches too far forward, necessitating an alteration of the wing position. This satisfactorily adjusted, the Wee Mite with Mr W C Noel at the controls essayed her first flight.

Still slightly out of trim though she proved, her inital flutter of a few hundred yards was successful and from it many lessons were learned which helped her builders.

To improve her the engine was geared and she was fitted with a four-bladed metal prop of 6ft pitch, 5 ft 9 in in diameter. But here her first slice of really bad luck overtook her. The metal prop burst and set up such a tremendous vibration that it crystallised the front part of the metal air-frame, practically ruining the front of the fuselage.

Noothing dsaunted, a new engine was secured, this time an A D Salmson of 40-50 hp, and repairs having been completed, it was installed with a two-bladed wooden propellor. this proved ideal fo rth epurpose, vibration was noticeable less than int he previous adaptation, and with the experience gained further teat flights were successfully accomplished, until the 'Wee Mite' was ready to be re-christened the 'We Can,' to the confusion of all the local doubters.

C W Noel had been a pilot instructor in the Royal Flying Corps. He started the Guernsey Flying, Gliding and Sail-Planing Club together with enthusiastic amateurs and ex-RAF men, having given a series of lectures on flying in the months leading up to the Club's inauguration. He became the Club's first Vice-President.

The Guernsey Gliding and Sailplaning Club has been adopted as the title of Guernsey's newly-formed organisation. [B C de Guerin is the Secretary.] Many new members, including two lady enthusiasts, were enrolled and subscriptions forthcoming were sufficient to place an order for a Scud I sailplane, with which it is hoped shortly that practical experience will be obtained. [Flying, January 24, 1934.]

Noel was helped in constructing the Wee Mite by 'clever motor-mechanic,' Mr H Le Parmentier. The original Scorpion engine was salvaged from a car crash. Noel made his first successful flight in the Wee Mite on September 15, 1933; he flew that summer at 93 mph and climbed at 450 ft per minute. See Library Aviation file and de Guérin's Scrapbooks.

Flights in the Wee Mite at Vazon were attempted yesterday afternoon in a rising, gusty wind. Pilot W L Stranger made a circuit of the bay and then Mr H Le Parmentier went up in an adventure that ended in the plane being badly damaged and the pilot receiving an injury to his head. Mr Le Parmentier was up on a trial flight but had not risen to any great height. He was on the point of banking to gain height when a gust of wind caught the Wee Mite broadside on, turned it completely upside down—and it came to earth with a resounding crash. The wings were smashed and the propellor ripped to pieces. Onlookers ran to the aid of Mr Le Parmentier, who was extricating himself from under the plane. He had had a lucky escape. He was suffering from a blow on the head and minor bruises.

The engine of the plane was not damaged, but in addition to the propellor and the wings there was a bulge in the main carriage.