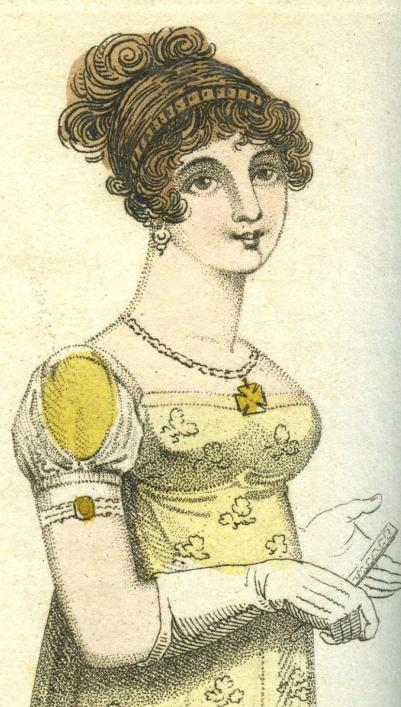 Mr White, from London, Ladies and Gentlemen haircutter, and dresser, and real manufacturer of Ornamental Hair, No 242, High Street, respectfully return his sincere thanks to the Ladies and Gentlemen and public in general, for the distinguished preference he has received from them, and begs to inform them that in future he shall wait on his customers himself. Those ladies who wish to be dress by him on the 18th January, are requested to reply in time. NB A variety of Bands, Wigs, Caps, Military Queues, Fronts &c, equal to London. [Gazette de Guernesey, 16 January 1808.]

From London, Ladies Hair-cutter and real manufacturer of Ornamental Hair, returns his sincere thanks to the Ladies of this Island, for the preference they have shown him, and takes this method to inform them that he has, this week, invented a new Head-Dress never made before, and can assure the Ladies that no wig will ever be wore after this its seem, for beauty exceed every other Head-Dress; nor will want the assistance of a Hair-dresser for 6 months, wearing every day, and may be put in to many different fashions in 10 minutes, by the wearer and to their own taste; it may be wore many years without the unpleasantness that proceed by the wearing of wigs; it is equally as convenient to long hair as a crop: No inspection will be allowed but to the purchaser.—M W will put it on any Lady's head, himself to see the forms of it, and can assure the Ladies that it never can be out of fashion. No Gentleman can by any means see it, so they need not apply, and no Lady can't purchase it without her word not to show it to any persons of the profession. He will make a just allowance to the Ladies that have bought hair of him lately, in exchange.—He has a room to cut Lady's hair, and another for Gentlemen, at his house, No 242, High-street. NB M W has no work-man now, as he has not taught his business to any person in this Island, so they will not be deceived. [Gazette de Guernesey, 30 January 1808.]

Mr White, from London, Real Manufacturer of Ornamental Hair, No 242, High Street, respectfully returns his sincere thanks to the Ladies and Gentlemen, for the distinguished preference they have shown him, begs to inform them that, he will be able to dress more Ladies on the 4th June, as Mr John Caire has been under instructions with him for some time, and by the 4th of June he has no doubt but he will be perfect in that part of the business and he is also learning  the whole art of making false Hair and to take to my business in five or six months, as the urgent necessity of bad health, and has every reason to believe that Mr J Caire will be able to give as much satisfaction as I have hitherto done; as I have pitched upon him as being the most likely person in this Island, for activity and cleanliness; for if I had got a person from London he might not have stopt long, which would be a disappointment for the Ladies, as I have pledge my word to supply the place until Mr J Caire is perfect, I shall not give up.

NB I wil have in ten or twelve days a new fashionable Head Dress intermixed with Hair, with several other new fashions; well calculated for the King's Birthday. Those Ladies who were disappointed on the 18th January, will please to speak in time. [Gazette de Guernesey, 30 April 1808]

M WHITE, from London, Ladies' Hair Cutter and Dresser, and Real Manufacturer of Ornamental Hair, returns his grateful thanks to the Nobility, Gentry, and Public in General, for the liberal encouragement he has received from them, and begs leave to inform them that he does not transact any of his business after the 29th day of September next; as Mr John Caire will be able to fulfil his situation, at the same apartments, No 242, High-Street. M WHITE, begs to recommend his celebrated Head-Dresses and Perukes as the most improved of the present day, the peculiar lightness of his improved Springs which are not a quarter the weight, yet more than treble the elasticity if the common Springs, the Head Dresses or Perukes is so easy as scarcely to be felt, yet adheres closely to the head, and are perfectly secure; their excellency is by no means confined to the Springs only, in his Head Dresses the hair may be divided at any part and no hair or ornament is required to cover the division, and from his recent improvment and his peculiar manner of weaving the hair, they cannot be perceived from the growing hair.

M WHITE is sorry to inform his friends that so many people impose on the public by their imitations, as it is a disgust and an imposition, as there is no other person of his profession in this Island, although some pretend so; and I hereby declare that there is no other person in the Island qualified to profess my business but Mr John Caire, to whom I have taught it.—A great variety of Grecian, Chinese, Madonea Wigs and Caps; Gentlemen and Ladies' Crop Wigs; also the original Dress of the Crown of Kennafust new fashion Turbants, and Egyptian Fronts, made to and after the manner of only one shop in Bond-street, London.—Gentlemen's hair cut in a superior style of fashion, at his room, Military Queues, &c.

NB An apprentice wanted in the above line of business.

For a book by a local author on this subject, in the Library collection: Crowning glory: The story of Wigs through the Ages from 3400B.C. to 1974 A.D, by Cox, J. Stevens. London: Hair extension centre, 1974.