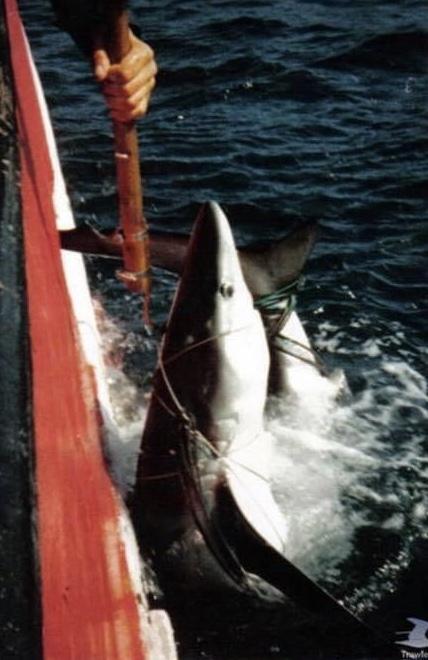 The Star, Monday, October 18, 1847. The image is of a large blue shark being landed aboard the Guernsey fishing vessel, Josephine Marie, c. 1990, courtesy of Daniel Robins.

On Thursday morning last a shark was discovered at a short distance from St Sampson’s harbour by a fisherman of the name of BICHARD and his crew, who were in a boat off that spot. They happened to have with them a harpoon and a musket, with which they attacked the voracious stranger. The former was lodged in its body, but, so far from disabling it, only rendered it furious; and it was not till it was pierced with five bullets that it was deprived of life. The shark was then, with some difficulty, got into the boat and brought on shore, and proved to be about two years old and of the blue species,1 measuring nearly eight feet. It had two rows of teeth, and its mouth was about a foot wide. Mr SHARSHAW, dentist, of High-Street, has procured the above-mentioned shark, and is now preparing to stuff it. We understand that a shoal of animals of this sort was seen a few days ago off Sark—a circumstance of very rare occurrence in this latitude.2

1 Both the blue shark and the larger porbeagle are found in local waters. It is now thought that the porbeagle shark uses the waters of Guernsey to spawn, as do other unusual fish, such as the marbled electric ray, that can deliver a shock of 200 volts and is found in numbers around Sark in the autumn months, buried in sand in deep waters. The blue shark, which eats cod, mackerel, and pollack, prefers cool, deep waters. The marine expert Richard Lord has the blue shark as a summer visitor to the islands, so it was surprising that a young one was seen recently in St Helier Marina in Jersey in February. The record for a blue shark caught in by a UK boat is 218lb, and a Guernsey boat only 132 lb; whereas the porbeagle record stands at nearly twice the size, at 507 lb. The Guernsey record for a porbeagle is 430 lb. Blue sharks may only eat fish but big ones still look terrifying! Here's a big one caught in local waters by the Guernsey boat Josephine Marie around 1990.

2 Records of fish species found in Guernsey waters begin around 1815 with a list of 16 or so edible species caught by local fishermen in Berry's History of Guernsey, and a list of fish with their Guernsey French names and their frequency in island waters from The Sarnian Monthly Magazine of the same date. A poem in Guernsey French from the 1820s, bemoaning the destruction of Fountain Street and the building of the New Market, includes the following list of fish for sale:

In 1862 David Ansted included F C Lukis' painstakingly-collected list of 121 species in his book, The Channel Islands. Joseph Sinel produced a list for the 1905 Transactions of the Société Guernesiaise, with names in patois, supplemented by the well-known naturalist E. Marquand, who published a shorter list in the same journal in 1908. An up-to-date online checklist of the fish species most likely to be found in Guernsey waters was produced by Sustainable Guernsey in 2010, and still includes the blue shark.