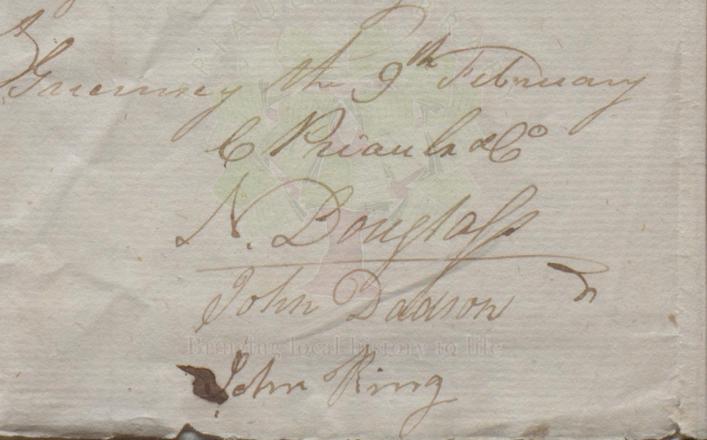 1st that Messrs Douglas and Dadson, will dispose of the cargo’s of the New Daphné’s letter of Marque, to the fleet under the command of Earl St Vincent or at any port in their way to Gibraltar to the best advantage of the owner of said letter of Marque & that they will give a true and just Account of the sales of the Cargo to Messrs C Priaulx  & Co above named acting for the owners of this vessel;

2ly Messrs C Priaulx & Co engage themselves toward said Messrs Douglas and Dadson above named, that they will receive 5% say five % on the sale of this cargo, as a Commission or compensation for their trouble besides which they are to be paid for their Expences during the Stay that they may make at Gibraltar, in this employment of the owners of said letter of Marque;

3ly As Capt John King is to proceed on a Cruize in the Mediterranean, he is to send all his prizes, if fortunately, if he should meet with some, to Gibraltar to the address of said Messrs Douglas & Dadson, & all such as are of little value we mean under One Thousand pounds, they are to dispose of to the best advantage of the owners of said New Daphné,  those exceeding the above sum of One Thousand pounds Sterling they are to send here under Convoy, being attentive to advise Messrs C Priaulx & Co thereof that they may provide for the Insurance;

4ly As all prizes under the value of One Thousand pounds are to be sold at Gibraltar, Messrs Douglas & Dadson will be intitled to a Commission on the sale of the same of 3 % to be divided between them in equal proportions, but as to the commission on the sale of the cargo, consisting of 5%, 3% is to be applied to the advantage of Mr Ninian Douglas & 2% to that of Mr Dadson;

5ly Messrs C Priaulx & Co leave to the judgment of Messrs Douglas & Dadson to remit the proceeds of the cargo in good bills on London, or otherwise to apply the same in the purchase of goods. If any can be brought to suit this market, & for which they’ll charter or buy a vessel, according as they will find it the interest of the commerce;

6ly In case any purchases should be made at Gibraltar 3% Commission will be allowed to Messrs Douglas & Dadson to be divided in equal proportions;

7ly Should any difference of opinion take place between Messrs Douglas & Dadson they are to call a third person with them & in that case the majority of opinions to be followed, giving always the preference to Capt King while he be present;

8th As Messr Douglas & Dadson, go out intirely in the service of the owners of the New Daphné, they are to have their Interest at Heart, in preference to any private Consideration of their own, & if it be prov’d that they have acted otherwise, either jointly or separately the party or parties are to forfeit the whole of the advantage accruing to them from this Engagement.

Signed, four copies in Guernsey the 9th February 1798, in presence of: