Guernsey did not celebrate November 5th until late in the 19th century, when the 'Guy Fawkes' Night' festival was deliberately introduced and began to replace the traditional burning or burial of the 'budloe' log on New Year's Eve. The photographs are of the procession of 1900; the one above shows the collectors wearing their placards, and the other the budloe paraded on a stretcher. 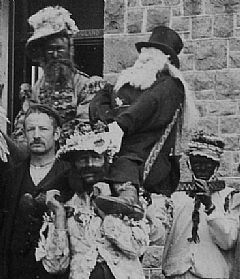 'Then, too, there were the fifth of November processions. One very big one used to start at St Martin's and consisted almost entirely of mounted men in all sorts of weird and wonderful costumes with painted and blackened faces, the Guy being mounted on a litter carried by two horses, tandem fashion. This procession was headed by a fife and drum band, one of the many there seeemed to be in those days, and from St Martin's paraded down the Ville au Roi, Mount Row, Queen's Road to Town, stopping at the houses where prominent people resided for donations to the collecting boxes. After dark the procession returned to St Martin's, its ranks now swelled to considerable numbers by foot-marching 'Boodeloes', and about ten o'clock the Guy was duly burnt with full accompaniment of fireworks in a field near Sausmarez Mill. Much throwing of squibs took place all along the route of the procession, and on one occasion a horse took fright and lashed out at one of the bandsmen, who was so badly injured that he died, and I believe it was this which caused the abandonment of the Boodeloe Procession.'

Edith Carey, in the Report and Transactions of the Soc. Guernesiaise of 1931: 'In 1909 I was told by old Mr George Luscombe of St Martin’s, who was one of the original instigators of the Guy Fawkes processions, that he well remembered as a small boy being taken, on New Year’s Eve, to the little three-cornered field near St Martin’s Mill which has only lately been thrown into the road. There the 'bout-de-l’an' figure was burned to the sound of the chifournie – or primitive hurdy-gurdy – and of cow-horns, while old women in their Guernsey bonnets and men with blackened faces and masquerade attire danced 'à mon beau laurier' round the flames, and and it ended in a riot of eating and drinking, dancing and singing.' 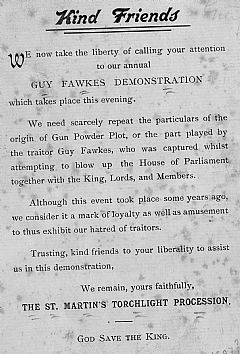 The event was celebrated in St Martin's parish by the usual annual torch light cavalcade. Starting from near the Old Mill at 3.30 the procession, consisting of 22 horsemen and the Guy Fawkes with typical whiskers and box hat, marched off to the music of a volunteer fife and drum band and, calling at various houses in the south of the parish, made their way through the Vauquiedor to the upper part of the Town parish viz, Mount Row, Grange, Queen's Road, and Ville-au-Roi, thence making their way through the Hubits and along St Martin's Road, finally arrived at their destination, a field at Les Camps, where they hanged Guy Fawkes on a gibbet, with a huge bonfire under him, in the presence of about 400 spectators, many of whom had come from town to see this annual event. The procession was most orderly throughout.

See The Report of the Folklore Section, 1914, in the Rep. and Transactions of the Guernsey Society &c., 1915, pp. 128ff., 'The Passing of Guy Fawkes' in which J Linwood Pitts attributes the importation of the 'Guy Fawkes Celebration' to an influx of 'working-class [immigrants] from the southern counties of England' near the beginning of the 19th century.' He regards it as having died out altogether, following the discontinuation of the St Martin's Procession in 1911 by the Constables of St Martin's. He notes also that the 1905 Act of Court requiring the vendors of fireworks to take out a licence had the effect of discouraging the sale of fireworks, which 'nobody regretted, for the annual celebration had become a bit of a nuisance, besides being more or less a public danger,' and finds the most interesting aspect to have been the way in which 'this novel Guy Fawkes' celebration with its cheerful bonfire seems at once to have absorbed and superseded the much older Island rite of burying the Bout-de-l'An, which bleak and frigid observance had been practised in the Island from very distant times.' Edith Carey, in her Report to the Folklore Section of 1922, says, 'The Rev. J A F Ozanne reports to me that, up to the other day when, as you know, the ceremony was abolished, the parishioners of St Pierre du Bois and St Saviour's burned their 'Guy Fawkes' at the foot of the menhir at Les Paysans. There they danced round the flames of the funeral pyre [..].' See also Machon, L., 'When was the Boud'lo burnt?' Quarterly Rev. of the Guernsey Soc., XLVI (3), Autumn 1990, pp. 77 ff.