One brave soldier: the death of Thomas Falla, aged 18 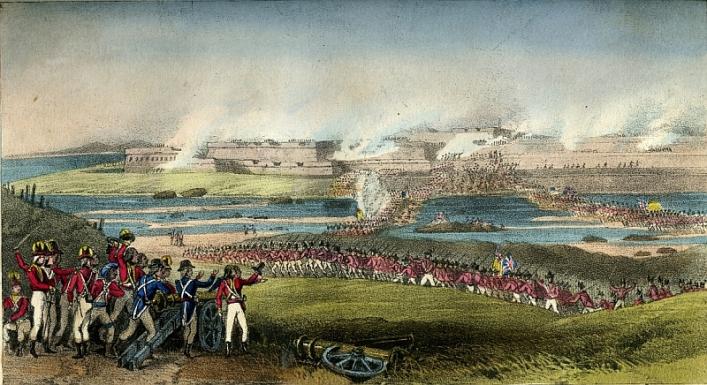 From the Diary of Colonel Bayly (1796-1830), of the 12th Regiment, p. 87. Thomas Falla was the son of the late Daniel Falla and Susanne Le Pelley, of the Maisons au Compte. His memorial is in St Sampson's Church. The picture above shows 'The Storming of Seringapatam, 4th May 1799 (Sutherland Highlanders),' from the Library Collection, and below is a photograph of the posthumous medal awarded to Thomas.

A propos of the siege of Seringapatam [....] one of the officers received so extraordinary a wound that I cannot refrain from relating particulars. As he was entering the mullah a shot from Seringapatam struck him in front of the right hip, lodging between the bones of the thigh. His bearers complained of the great weight bearing on one side, on examining the wound the surgeon could not suppress a hopeless cast of countenance, on which the wounded officer (Lt. Falla) requested that he might have a bottle of port wine to keep up his spirits and die like 'one brave soldier' (he was a Guernseyman, not very well versed in the idiom of the English language). Soon after this he died.

The body was opened, and to the astonishment of all in the camp a wrought iron shot of 26lbs weight was extracted from between the bones of the thigh, which had been completely covered over by a swelling of the part affected, so that it was not discovered that any ball was beneath the wound until the extraction took place. This almost incredible fact was genera

lly known and the shot weighed and exposed to the public scrutiny of the officers of the army.

Thomas was in the 12th (East Suffolk) Regiment of Foot and his medal (shown below) is on display in the Suffolk regiment museum. He cannot have been Lieutenant long; the Army List for 1799 shows that he had been Ensign in the 12th since August 1796. Bayly may have misremembered the size of the ball; George Ellers (1777-1842), a captain in the same Regiment, says in his Memoirs that 'poor Falla' was killed by a '12-pounder' rather than a 26-pounder, which is somewhat academic in the circumstances.

See also Foul deeds at the Falla's: this family was very unlucky.

In this church in the same tomb lie the bodies of Daniel Falla, Ecuyer, of the Maisons au Compte, 41 years, 9 months, 20 days of age, gone to our Lord on the 28th February, 1792, and of Mrs Susanne Le Pelley, his wife, daughter of Jean Le Pelley, Ecuyer, of Les Pelleys, aged 44 years, nine months, 20 days of age, gone to our Lord on 30 September, 1796. This monument is erected to their memory and to that of their younger son, Thomas Falla, Lieutenant in the 12th Foot, who died at the Siege of Seringapatam on the 6 April 1799, aged 18 years, six months, and 25 days, following a wound from a heavy 26-pound cannon-ball, which lodged between the bones of his thigh; the wound being considerably inflamed, the surgeon from the regiment, although he examined the injured spot, did not realise that a cannon-ball was inside and it was only after his death, which took place six hours after the event, that it was extracted, to the amazement of the whole army. [From the French. See Edith Carey's copy of Auger's St Sampson's Church: Archaeological and historical notes, pp. 14-15, in the Library.]

Thomas' brother Daniel died in 1851, having attained the rank of Colonel; he had been Town mayor of Gibraltar, and was the last person to be buried inside St Sampson's Church.